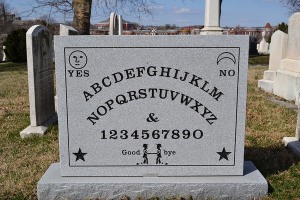 When I decided to start this blog, I was going through possible topics and the Ouija board briefly floated through my mind before being dismissed.

Some topics, such as the anti-vaccine movement, would be a Major League challenge for me, given my microscopic amount of medical knowledge. Others are double-A, such as cryptozoology, which requires addressing issues like eyewitness reports and the fact that animals are discovered all the time. Then we have a Rookie League challenge, such as homeopathy, which necessitates little more than explaining the process.

But Ouija boards seemed downright sandlot. I didn’t think anyone actually believed in them, except perhaps a middle school girl at a slumber party. Or maybe a fundamentalist Baptist preacher who thinks the planchette is being guided by a demon’s digits.

Then a successful, educated, religiously-ambiguous middle age woman told me she believed. If the idea is still out there, it needs to be addressed. So here, somewhat sheepishly, is my rundown of the Ouija board.

To the believer, it is a divination system that can reveal the past, aid in the present, and predict the future. In reality, it is nothing more than the ideomotor effect in action. This is when suggestion or expectation causes involuntary and unconscious motor behavior.

You can conduct a test to show how the ideomotor effect works. Hang a small weight like a ring from a string about two feet long. Hold the end of the string with your arm out in front of you and let the weight hang freely. Ask yourself a yes-or-no question, with clockwise being “yes,” and counterclockwise being “no.” Before long, “answers” will begin to emerge, as the ring will start to swing in small circles.

You are making imperceptible movements without knowing it, and the string causes these movements to be build. Eventually, it will develop into a full swinging motion. When the ideomotor effect kicks during Ouija board use, and the person believes the movement is coming from a spirit, they are vulnerable to all manner of suggestion.

Besides this physiological reason, the subconscious also comes into play when using the Ouija board. This was best demonstrated on Penn & Teller’s “Bullshit!” They had a pair of believers fiddle about with a Ouija board for a few minutes. Then the two were blindfolded and the board stealthily turned 180 degrees. The duo were then asked yes-or-no questions, and they brought the planchette to where they “yes” and “no” options had been before the board was moved.