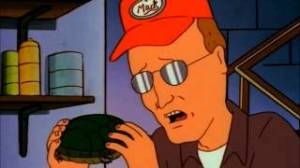 So conspiracies are real. But so, too, is a movement that finds conspiracies where none exist. There are three varieties of conspiracy theorist: The single event, the systematic, and the super.

The most commonly-believed of the single-event conspiracies is the Kennedy assassination, the only time polls have shown conspiracy theorists to be in the majority. There are three reasons for this. First, this is the one which has the most sub-conspiracies to choose from. Second, it is the one that has been most aired in the mainstream media. Finally, as we will see, conspiracy theories can be a way of trying to make sense of the world. It is hard for some to accept that Camelot was done in by nothing more than a commie drifter loser.

The most prominent conspiracy theory of recent years has dealt with Barack Obama’s birth place. Part of it was the result of a man with dark skin being elected president. Someone who sees his world changing in ways he dislikes would prefer to think sinister forces are at work.

For some birthers, this was just another in their inter-connected collection. But for those who adopted only this theory, it helped them deal with election results they couldn’t handle. Rather than asking, “Where did we go wrong? Why did we fail?,” it was more attractive to declare, “The other side cheated.”

Statements by Hawaiian officials, two birth certificates, two newspaper birth announcements, and verification by FactCheck.org were all dismissed. This highlights a conspiracy theory’s most defining feature: Anything that disproves it becomes part of the conspiracy.

Another single-event conspiracy theory centered on George Zimmerman, in which an everyday event like an SUV overturning morphed into a wide-ranging attempt to bring about his redemption. One piece of “evidence” was that the SUV family hadn’t posted about it on social media. Of course, if they had posted, the same theorists would have written, “There is no way they would have had the presence of mind to post within an hour of almost dying.”

In the systematic conspiracy theory, a shadowy group of Jews, Bilderbergers, Free Masons, or Bohemian Grove members are plotting world domination. Theorists seldom offer a name in association with any of these alleged power mongers. In the past, names were given, but this fell out of favor when persons began asking, “If he was all-powerful and all-evil, why did he die without his goals being met?” For a while, the deaths were presented as a hoax, but each succeeding year made it difficult to convince even the most credulous.

Then we have the super conspiracy theorists, in which it’s all thrown together. Some cases are so extreme that, when polled, there were those who answered “yes” to both these questions: “Is Obama bin Laden alive?” and “Was he already dead before the U.S. Navy SEAL strike?”

Now we’ll delve into how a person comes to such a way of thinking. Sometimes, the reason is self-satisfaction. They like feeling they are privy to special information and are smarter than the masses.

They will usually claim to be rooting out evil government officials and their media lackeys. But this falls flat when actual misdeeds surface. In one week last year, the IRS scandal, Benghazi, and Fast and Furious were topping the news. If theorists had really been concerned about government malfeasance being shielded by a compliant media, this would have been their dream week. Instead, most conspiracy theory sites didn’t mention these. And Edward Snowden, who would have been a goldmine to anyone wanting to expose government corruption, was instead labeled a plant or false flag.

If there really were a group of impossibly cruel and powerful people controlling world events, that would mortify most people. But for a conspiracy theorist, the idea offers comfort. It is reassuring to think that, rather than there being random evil in the world, it is all being controlled. It is also appealing to think they have some power over it, as they can recognize and expose it. It also offers them the chance to establish a simple world view of right-or-wrong, us-vs.-them, good-against-evil.

While there have always been conspiracy theories, the ideas have exploded exponentially on the Internet. Here, believers can flock to have their confirmation bias stroked in a virtual world free of cognitive dissonance. Of course, this can appeal to any group or agenda, but is especially reassuring to someone seeking refuge from dark overlords and brainwashed masses.

Conspiracy theorists argued that police officers were near the scene of the Boston Marathon bombing so their heroic response could be filmed. Officers knew a bomb was about to explode, so they stood by it. Welcome to inside the mind of a conspiracy theorist.

In the most disturbing conspiracy theorist action I’m aware of, Gene Rosen, who harbored Sandy Hook survivors, was bombarded with threats and hateful insults. Incredibly, his CONSISTENCY was presented as a sign his eyewitness reports were false. Conspiracy theorists argued it proved he had rehearsed it.

Sometimes, conspiracy theorists form their conclusion even before the event. I covered an exercise in which military and civilian emergency response teams practiced for the detonation of a nuclear dirty bomb. My article found its way to a conspiracy website, where posters excitedly pointed out that a false flag was coming.

There may be no mindset I am further removed from than that of conspiracy theorist, given my belief in Occam’s Razor and my Libertarianism. I am aware there are a few Libertarian conspiracy theorists, and they confound me greatly. They believe a government that is incompetent to build roads or schools is able to seamlessly pull off mass shooting hoaxes, 9/11, AIDS, and tornadoes.