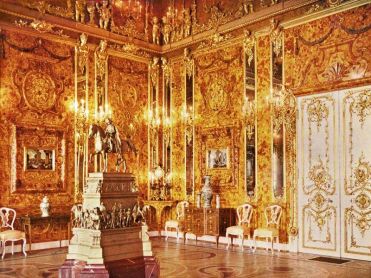 Commies, Nazis, and Indiana Jones wannabes all play roles in the long, captivating, dispiriting history of the Amber Room. The room was an extremely opulent portion of the Catherine Palace near St. Petersburg and on its highly-ornate walls were worth untold missions, as was the artwork which hung on it. It featured bright gilded panels imbued with gold and amber, as well as gold leaf and mirrors and esthetically arranged.

It was the pride of the Romanov Dynasty and then the Soviet Union until invading German soldiers took possession of it. While trying to move the room, the Nazis found it too brittle to be safely disassembled. Anatoly Kuchumov could have told them that. He served as a Soviet curator and he discovered how fragile the pieces were when he tried to move the invaluable collection into hiding. He settled for building false walls to cover the amber panels but the impromptu gamble failed and the German soldiers took apart he walls and packed it into crates. They sent it to Königsberg Castle, which was razed after the arrival of Brits and Soviets, with the latter burning the building completely.

Kuchumov recovered three Florentine stone mosaics, which were the only inflammable portions of the Amber Room. More than three decades later, German citizen Hans Achterman saw a documentary about the room and he recognized the stone mosaics as something identical to an item in his parents’ attic. His father had been one of the Soldiers who had dismantled the room and he stole the mosaic and kept it as a souvenir. This find stoked a batch of conspiracy theories and wild claims about other parts of the room still being hidden or otherwise waiting to be found.

Some proponents believe the room’s contents were packed into crates and moved before the Red Army got to Königsberg. Others maintain they were ptt on a ship which sank. Other ideas are that it is being held in mine shafts or an abandoned warehouse.

Investigative journalists Cathy Scott-Clark and Adrian Levy addressed all this and much more in their work, The Amber Room: The Fate of the World’s Greatest Lost Treasure. They interviewed former intelligence officers, government officials, retired military, and curators. They concluded that, “The Soviet Union, while wanting to be seen to search for the Amber Room, was also determined that nothing should be found.”

That’s because the USSR’s leaders knew their soldiers had destroyed the Amber Room but wanted to keep the idea it still existed as a bargaining chip. So when looted German artwork is mentioned, the Soviets retort that Amber Room also went missing.

The Soviet official with the most vested interest in the destruction’s cover-up was Kuchumov. He nervously watched as his former museum colleagues were shipped to Siberia for failing to protect treasures from the Nazis, and none of those valuables were worth what Kuchumov oversaw.

He spent several years in charge of a commission whose ostensible mission was to unearth the Amber Room. But it was all a sham and Kuchumov was an “acting chairman” in the most literal sense. They commission’s actual purpose was for Kuchumov to keep his freedom by maintaining an illusion that the Amber Room valuables were still out there waiting to be found. The longer it stays hidden, the more the legend grows.