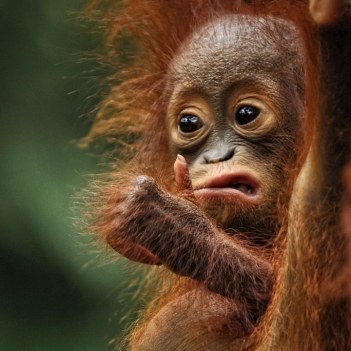 Koko was a western lowland gorilla who became the world’s best-known primate for her apparent ability to master a rudimentary form of sign language. She hobnobbed with Fred Rogers, Robin Williams, and Hugh Downs, and made countless media appearances.

However, once one got past the amazement, the fawning, and the desire to imbue Koko with anthropomorphic tendencies, there was little to support the idea that she was expressing her thoughts, emotions, and wishes. Koko’s TV time was not accompanied by appearances in scientific journals, empirical studies, or sound research. To split ape hairs, she and other primates could manage communication, but not language.

As Skeptoid’s Brian Dunning wrote, “If it works, why aren’t there signing apes everywhere? Why don’t ape parents teach it to their own young? If apes had any meaningful ability to communicate using sign language, many of those who interact with humans would do so. And everyone with a primatology degree would have experience communicating with them.”

Instead, we have only one famous gorilla and a smattering of lesser-known apes, none of whom have demonstrated signing ability under controlled conditions. One scientist who wondered if this could be accomplished was Herbert Terrace, who conducted experiments with a chimp in his Columbia University laboratory. As attractive as the idea of primate-human chit-chat was, Terrance found little validation of the notion.

Writing in Science, he concluded, “Our detailed investigation suggests that an ape’s language learning is severely restricted. Apes can learn many isolated symbols, as can dogs, horses, and other nonhuman species. But they show no unequivocal evidence of mastering the conversational, semantic, or syntactic organization of language.”

Rather, the observed apes used symbols to beg or would signal if they wanted to play, eat, drink, or be petted. They were no more using language than your cat is when she seeks attention by rubbing her head against your ankle. Claims that apes had managed sentence structure, syntax usage, and the ability to express thoughts and feelings were without merit, and represented humans interpreting what they wanted to.

Of note, Koko “signed” only with her handler, Dr. Penny Patterson, who herself published no research. Koko was not communicating via any known sign language, just an idiosyncratic version supposedly shared only by her and Patterson.
Videos of the duo in action show Koko paying little attention to her handler’s commands, even though Patterson constantly encouraged and commended Koko.

Moreover, the gorilla never initiated the back-and-forth, responding only when goaded by Patterson. If Koko had the ability to express that she was hungry, lonely, or tired, she seemingly would have made that known without having to be prompted. And she could have done so with more than one person. Instead, any supposed success was a message that only Patterson could interpret. Let me communicate my thoughts on that by declaring it to be hooey.