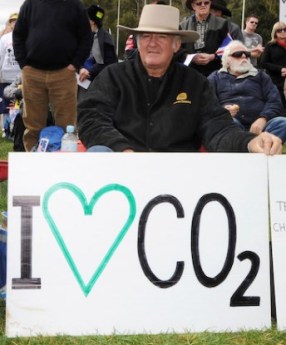 Human activity is easily the largest source of carbon dioxide in our atmosphere. And the increased amount of CO2 is the only way to account for the planet’s warming trend. These are the conclusions of 99.8 percent of peer-reviewed papers on the subject. With that, we will take a look at a few of the counter arguments, which one is far more likely to encounter in a Wall Street Journal op-ed or a Fox and Friends segment than in a climate science journal.

One claim is that anthropogenic carbon dioxide is unable to effect the climate since CO2 makes up such a small amount of the atmosphere. This argument also holds that the amount of carbon dioxide produced by humans is negligible compared to what volcanoes emit.

It’s true that CO2 does makes up just .04 percent of the atmosphere. But even at that microscopic concentration, carbon dioxide absorbs infrared radiation and therefore acts as a greenhouse gas. As to the second part of the argument, human activity produces 130 times more CO2 than a volcano. Besides, volcanic eruptions have a cooling effect on the planet’s average temperature since the resulting gases and dust particles block incoming solar radiation.

The contrarians are also right about 95 percent of the CO2 that is released to the atmosphere coming from natural sources. However, natural processes such as plant growth and absorption into the ocean act to pull the gas back from the atmosphere and cancel any effect it would have. Human activity, by contrast, is not accompanied by a cancelling effect and the additional CO2 lingers. The only way it could be offset is by growing enough plants or by mastering a hypothetical concept like carbon capture. Analyses of the changing ratio of carbon isotopes in the air confirm that deforestation and the burning of fossil fuels have accelerated CO2 levels 40 percent in less than 200 years.

The other side counters that since water vapor represents the most abundant and powerful greenhouse gas, it is to blame for rising temperatures, not anthropogenic CO2. This is a partial truth at best. Because while water vapor has an impact, that’s only true because of its interaction with the rising levels of CO2. Writing for Scientific American, John Rennie explained, “CO2 absorbs some wavelengths of infrared that water does not, so it independently adds heat to the atmosphere. As the temperature rises, more water vapor enters the atmosphere and multiplies CO2’s greenhouse effect.”

A third claim is that climate scientists fail to acknowledge the existence of a warming period in the 15th and 16th Centuries, when temperatures were as warm or warmer than the present day. Scientists do, in fact, recognize this. A larger point is that the deaths, mostly from disease, of 55 million North American natives in the 16th Century meant less carbon dioxide was concentrated in the air. This is what drove the drop in average global temperature. The fact that the falling temperatures coincided with a mass die-off lends credence to the idea that manmade CO2 fuels climate change. This is further supported by evidence found in ice caps and tree rings.

A final claim is that the sun or cosmic rays are the real causes of global warming. However, the Intergovernmental Panel on Climate Change has noted that between 1750 and 2005, impact from the sun measures less than a tenth of the influence from human activities. Besides, CO2 and the other greenhouse gases serve to amplify any warming from the sun.

For an alternate viewpoint to all this, consult a nearby cranky uncle.