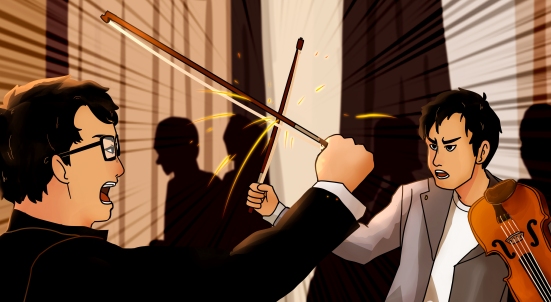 We should always accept evidence arrived at using proper research and techniques even if we don’t care for the conclusions. When shown the proof, I embraced the idea that the War of the Worlds broadcast panic was mostly mythological, even though the idea of millions of impromptu Minutemen fending off an alien invasion was one of my favorite slices of Americana.

Recently, I also jettisoned another of my beloved legends – that Stradivarius violins will forever be without peer due to long-lost secrets and the impossibly high work ethic and pride of their creator. While high-class instruments, their reputation is more owed to exaggeration and expectation that acoustics and dynamics.

About 500 still exist and they are often paired with world-class violinists such as Itzhak Perlman or Joshua Bell. The latter played one to unsuspecting commuters in a subway terminal in an experiment to determine if beauty could be appreciated regardless of surroundings.

Brian Dunning at Skeptoid wrote the Stradivarius violins have been subjected to CAT scans, chemical analyses, and computer simulations to unearth the instrument’s elusive secrets. Musicians and scientists have puzzled over this fiddle riddle and conducted experiments to determine if the key lay in the wood, glue, shape, varnish, the way the violins were treated, or something else.

There has even been speculation that climate played a factor. Stradivarius plied his trade during a time of extraordinarily low sunspot activity, when European winters were colder than today. Dunning explained, “Trees grow more slowly in the cold, the rings are tighter, and the wood is more dense.”

Therefore, luthiers using the same type of wood today as Stradivarius did would be working with a less-dense material. Knowing this, scientist Francis Schwarze developed a fungal treatment for wood that increased its stiffness and made it comparable to the wood that Stradivarius held. Schwarze had a violinist play both a Stradivarius and a modern instruments, and a panel of experts thought the new violin had been made by the Italian legend. While this might seem to suggest that climate was the answer to the oft-pondered mystery, we will soon see that a more likely answer is that the Stradivarius rests more on reputation than results.

While opinion is involved when deciding if something is good, bad, or so-so, not everything is completely subjective. Three different persons could rank Twain, Dickens, and Poe, and reasonably arrive at three different orders. But musical instruments have quantitative aspects that are measurable – sound waves, pitch, frequency, and tone, all of which can be assessed and objectively identified.

A research team at a 2010 international violin competition did just that when they assembled six violins and 21 performers for a controlled test conducted by world-class musicians and sound scientists. The tested stringed instruments included three modern highest-quality violins, an 18th Century Guarneri, and two Stradivariuses, one from 1700 and one from 1715.

The experiment was doubled blinded; neither the participants nor the researchers knew which violin was being played. Each violinist tried 10 pairings of instruments, playing each for one minute. Afterward, they identified which one they preferred. In a second test, violinists were given access to all six instruments for 20 minutes, then asked to evaluate which was the best and the worst in five categories: tone colors, playability, response, projection, and which one they’d want to own.

This was just one test and perhaps another Stradivarius or two or 10 would have a performance worthy of the instrument’s iconic image. But based on this double-blind study by experts, it seems that the Stradivarius is comparable to other high-quality violins, or in some cases, even a bit beneath them. Much of its value, then, comes from its name, prestige, and historical relevance.

Preparing its annual ranking of U.S. colleges, Time inputted all the data to be considered and Yale came in third. The editors then decided to bump Yale to first because it was Yale. Time considered Yale’s name to be of enough value that a degree from there would be worth more than one from anywhere else. A similar mentality seems to have caused music aficionados to catapult the Stradivarius from an excellent instrument to one incapable of ever being matched.

One thought on ““String theory” (Stradivarius)”