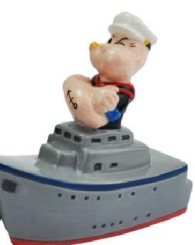 The story of the Philadelphia Experiment would make for SciFi B movie, but is even worse when attempted to be passed off as science fact.

The Navy allegedly carried out the experiment in October 194 and succeeded in making USS Eldridge was briefly invisible. This was supposedly made possible through application of Unified Field Theory, which allegedly allowed light to be bent around an object. An unexplained connection between gravity and electromagnetism also played a role. Yet another Flash Gordon-worthy effect was employing powerful magnets that caused to the Eldridge to be enveloped in green fog.

In most urban legends, being fascinating is inadequate; there has to be a spooky element as well. Therefore, the experiment was said to come with deleterious side effects. This included horrors such as sailors ending up embedded in the ship’s metal. Others who were not thusly encased developed mental issues and some went missing. Depending on the level of embellishment, versions of the tale have the ship being moved 200 miles away and returning, all in 10 seconds, and going back in time. So the Navy scientists are credited with a trifecta of achieving invisibility, teleportation, and time travel.

We are still looking for a Unified Field Theory, there are no invisibility cloaks unless they are working really well, and if anyone is moving about the time continuum, he or she has not appeared in Cambridge, England, on June 28, 2009, to attend Stephen Hawking’s party in their honor. In more mundane matters, Navy records show that the USS Eldridge wasn’t even in Philadelphia the month this momentous event occurred.

This extravagant tale originated in the warped mind of Carl Allen, who claimed to have seen the ship vanish. UFO enthusiast Morris Jessup contacted Allen, but quickly dismissed him as a deluded crank. Allen made notes to himself a la Memento and A Beautiful Mind and also claimed to have worked with Einstein, another significant assertion unsupported by any proof. To make it even more fun, heregularly veered into tangents on lost continents, time travel, and alien visitors.

Jessup committed suicide April 1959 because of his failings in career and marriage. The more conspiratorial minded maintain he was murdered to stop his research, although he had done little of that into Allen’s claims after abandoning interest since the claims were so outlandish and bizarre.

The story may have a tiny basis in fact, in that the Navy (as it always has and will continue to do) was engaged in experiments in October 1943 that were intended to increase its ability to win sea skirmishes.

Specifically, there were degaussing procedures tested on the USS Engstrom. Crew members wrapped the ship in large cables, then shot high voltages through them, aiming to scramble the Engstrom’s magnetic signature. The results were that the ship was left undetectable by some types of torpedoes and underwater mines. A success to be sure, but it’s quite a leap from that outcome to insisting that a separate vessel managed complete invisibility, teleportation, and time travel.

The Navy denies any of this ever happened, which, if one is jaded enough, lends credence to the notion that it did in fact occur. If the Navy ever did confirm that the experiment was real or if the Air Force did the same with Roswell, the reaction from conspiracy theorists wouldn’t be, “A-ha, I told you so, I was right all along.” They would be to try and figure out what even more sinister and frightening event this admission was meant to detract from.