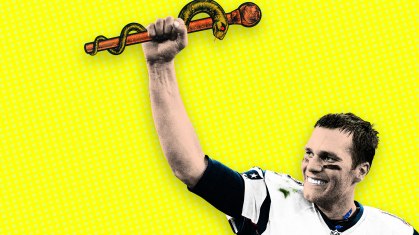 Whatever reasons Tom Brady might give for his key fumble in the closing minutes of Super Bowl LII, he won’t include his breakfast among them. The New England quarterback touts his TB12 Method through his book of the same name and he outlines his dozen guidelines for optimal performance. These include, supplements, stretches, and massage techniques, but the primary focus is on diet.

Brady emphasize foods that he calls “alkalizing,” “anti-inflammatory,” and which improve “muscle pliability.” He writes that certain meal selections lower his pH level, which in turn help with a range of ailments, from low energy to supple bones. However, a person cannot impact their pH balance through diet or anything else, nor would one want to. The lungs and kidneys maintain pH levels and the body deviates very little toward more acidic or more alkaline, instead permanently residing in a balanced, ideal range. In this sense, pH levels are somewhat akin to body temperature. There is little one can do to impact it, one should not be attempting to do so, and if it changes five percent in either direction, medical help should be sought.

Clearly, some of this abstinence is good. Avoiding alcohol, trans fats, and excess sugar are to be applauded. But some items on his list are there because of unwarranted fears, specifically of GMOs and gluten. Moreover, some foods he eschews are good for health, such as the vegetables. The biggest point, though, is that whatever Brady is refraining from or indulging in, there’s no evidence that the diet does what he claims. It neither alkalizes the body nor improves muscle recovery.

One possibly-true-but-with-a-caveat claim is Brady’s insistence that his anti-inflammatory diet helps him stay injury free and recover quickly from a bruising corner blitz or a game played on three days’ rest. It is true that our cuisine choices can impact inflammation, but Brady’s diet is unnecessarily restrictive.

Before going further, let’s emphasize that there are two primary types of body inflammation. One is beneficial and assists the body’s immune system against viral and bacterial interlopers. As an example, the skin may redden as the body turns up the heat in order to fend off bacteria residing in an elbow scrape. Then there’s harmful inflammation, which occurs when the body’s inflammatory responses are overactive and which reduces a person’s ability to fight off invaders and disease.

Unlike our pH levels, there are ways to deal with harmful inflammation. These include regular exercise, maintaining a healthy weight, medicine, and, yes, diet. But anti-inflammatory regimens aren’t nearly as exclusionary as the one Brady is promoting. Per an article cited in PubMed, an effective anti-inflammatory diet would focus on omega-3 fatty acids and colorful, non-starchy vegetables, while eliminating Ding Dongs and the like. On another point, there’s no evidence that these diets boost athletic performance. The only post-exercise food options likely to speed recovery are getting adequate carbohydrates and protein.

Another tip Brady offers is drinking water equal to at least half one’s body weight in ounces per day. For instance, I weigh, well never mind, let’s just go with someone who weighs 180 pounds. That person, per Brady, should be drinking at least 90 ounces of water daily. He claims consuming less could lead to decreased oxygen in the bloodstream, more susceptibility to sunburn, toxin buildup in cells, and an undefined unpleasantness he calls an “unhealthy inner environment.” None of this has any scientific backing, nor does Brady attempt to cite any.

To state the obvious, humans need water, but let thirst be your guide on whether you should drink some. Our bodies maintain sufficient reserves of electrolytes and 538 journalist Christie Aschwanden quoted exercise scientist Tamara Hew-Butler, who said even an endurance athlete will have salts and minerals replaced with their next meal. There is no need for supplements or excess water consumption. She further said, “Even athletes taking part in ultramarathons should not drink beyond thirst, and supplemental sodium has been demonstrated to not be necessary during prolonged exercise even under hot conditions for up to 30 hours.” Besides, drinking extreme amounts of excess water can lead to hyponatremia, a potentially fatal condition.

As to the muscles claims, Gretchen Reynolds of The New York Times took these on. Brady’s idea is that muscles should be pliable for good health and prolonged athletic performance. He suggests less weight training in lieu of “targeted, deep-force muscle work,” which entails “focused massage and contracting of muscles, while also stretching and pummeling them, preferably with high-tech, vibrating foam rollers or vibrating spheres.”

There is no empirical evidence supporting this and Brady is not a subject matter expert with double blind studies and published papers to his name. There’s no more reason to believe his take on this than there would be to turn quarterbacking duties in the Super Bowl over to a kinesiology professor. Stuart Phillips holds just such a position at McMaster University and he said that soft muscles are sick ones, so Brady is not accomplishing what he thinks he is, nor would he want to.

Brady calls muscle pliability the name he and his body coach “give to the training regimen he and I do every day.” In other words, they made the term up and there is no science supporting the purported benefits they attribute to it. Indeed, Reynolds performed a PubMed search with the keywords muscle and pliability, and the only result was a study on the efficiency of various embalming techniques on corpses. Brady’s nutritional notions should likewise be considered dead on arrival.