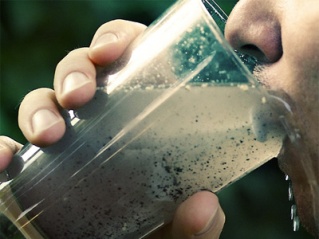 Anti-vaxxers may soon be challenged in their role as the most prominent spreader of preventable diseases. Another science-challenged trend focuses on what adherents call raw water. It is based on the idea that any treatment of H2O is detrimental and that water should be consumed untreated, unsterilized, and unfiltered. And if you don’t live near a river or stream, companies like Live Water and Tourmaline Spring will deliver raw water to you.

The trend is driven in part by distrust of tap water, particularly its fluoridation and the lead pipes which deliver some of it. Proponents also contend that filtration removes beneficial minerals.

The lead pipe issue is the one concern grounded in reality. Flint, Mich., is the most hideous example of what can happen if the problem is inadequately addressed. But better regulation and bottled water would fix this, while raw water would not. Another concern is that water treatment facilities are unable to remove all trace pharmaceuticals, but these levels are so low as to be innocuous. And even if they did pose a danger, that hazard would not be alleviated by raw water, which by nature goes through no treatment process.

Besides these deficiencies, raw water claims are awash, so to speak, in the appeal to nature and antiquity fallacies. The Live Water website boasts, “Earth constantly offers the purest substance on the planet as spring water. We celebrate this ancient life source that humanity flourished from, since the beginning of our existence. We trust it’s perfect just the way it is.”

The website also recommends consuming the product within one lunar cycle of having purchased it. This is more appeal to nature, for even if drinking the water within 29.5 days was optimal, the company could just say that rather than mentioning the moon and pandering to the nature crowd.

Singh acknowledges that reverse osmosis gets rid of most of the nasty stuff in water, but says it also makes the water “dead.” He fails to explain precisely what that means, but seems to allude that the process robs water of probiotics and beneficial bacteria. He likewise asserts that this good bacteria will kill its bad counterpart. It’s true that good bacteria sometimes vanquishes the bad, but there’s no evidence this is occurring in the raw water being peddled. Besides, bad bacteria is already filtered out in the treated and bottled water Singh is campaigning against.

Which leads to the issue of ingesting harmful bacteria. Drinking raw water could be your chance to be on TV, specifically Monsters Inside Me. Waterborne disease is still rife in some places. Giardia, amoebic dysentery, cholera, hepatitis A, salmonella, shigella, and e. coli caused many deaths before the advent of sewage and water treatment systems. These tragedies continue in the Third World, with its abundant supply of natural, raw water.

Singh and other advocates are correct when they say customers might get more minerals from their product, but those minerals may include arsenic. Flowing spring water, while appearing pristine and pure, will contain animal feces and possibly deadly microbes. Therefore, disinfecting this water if planning to drink it is crucial to preventing the spread of dangerous viruses, bacteria, and parasites. Drinking water in the wild should only be done in a last-ditch effort to avoid dehydration and if doing so, the CDC recommends boiling it first, or if that’s impossible, chemically treating and filtering it.

Since Singh and other enthusiasts appeal to antiquity, allow me to point out that civilizations have been trying to clean their water for 3,500 years. For instance, the Egyptians and Greeks used charcoal, sunlight, boiling, and straining to try and filter out impurities. Fast forward a few millennium and by the early 20th Century, public water utilities were removing disease-causing microbes via chlorine disinfection. This helped to substantially reduce instances of typhoid and cholera.

While apparently being OK with cholera-causing bacteria in his drinking water, Singh draws the line at fluoride. He asserts without evidence that fluoridation is designed not to fight tooth day, but to accelerate brain decay. Sing told The New York Times, “Call me a conspiracy theorist, but it’s a mind-control drug that has no benefit to our dental health.” I won’t bother calling him a conspiracy theorist since he took care of that himself. But I will call him the latest in a sad line of anti-science lowlifes that threaten to reverse centuries of progress and knowledge.

One thought on ““Dead with the water” (Raw water)”