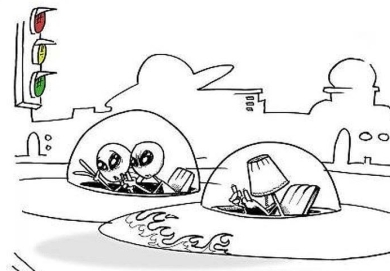 Called the Advanced Aviation Threat Identification Program, it collected video and audio recordings of UFO incidents. An anonymous senior intelligence official quoted by Politico revealed that the main reason was to determine if Russia or China was using military technologies the U.S. was still unaware of.

The Times piece included images of a Navy jet being surrounded by a glowing aura that traveled at high speed while rotating. While the preferred inference of some readers was that it was an alien spacecraft, a more terrestrial explanation suffices.

John Lester Miller, who impressively managed to write an entire book on infrared imaging, described what caused the seeming UFO during an interview with Robert Schaeffer of the Bad UFOs blog. Miller explained that the image resulted from a processing byproduct known as ringing:

“When in white hot, you will see that the aura around it is dark and when in black hot, it is brighter than the background. This is the image processing algorithm compensating for the large signal on neighboring pixels where the signal is not there. The algorithm doesn’t know the shape of the object and over-processes the neighboring pixels.” He added this happens when the captured image is of an object over a cold background, which would describe jet engines obscured by high altitude clouds.

The results were also another example of the stagnant quality of UFO imagery. In a world of increasingly vibrant colors, stunning clarity, and 4K ultra-high definition resolution, the standard candid of Invaders From Mars remains blurry photos and shaky, out-of-focus videos.

The program ran from 2007 to 2012 and today one of its researchers, Luis Elizondo, heads an organization dedicated to UFO research. It was his statement to CNN that most got UFO buffs excited. He said, “These aircraft are displaying characteristics that are not currently within the U.S. inventory, nor in any foreign inventory that we’re aware of.” These supposed limitations on American technology and our ignorance of other countries’ systems were extrapolated by Elizonda into a personal belief that it counts as evidence of alien visitation.

But Dave Mosher of Business Insider interviewed Seth Shostak, a senior astronomer at the Search for Extraterrestrial Intelligence Institute, who took a more measured approach. Certainly the military wants to know what’s going on when it sees aircraft above its airspace it can’t identify. But that doesn’t equate it to being Zontar, the Thing From Venus.

Probably the most sizable obstacle to overcome would be distance. If one could devise a spacecraft that could get to the moon in an hour, this ultra-swift mode of cosmic transport would need to maintain this pace for 27 years to reach Neptune and for nearly three millennium to reach the next closest solar system. This hypothetical journey also assumes managing the logistics of repair, refueling, medicine, and food, all while avoiding the perils of deep space.

Shostak said there are about 1,400 solar systems within 50 light years of us Earthlings. This seems to offer plenty of opportunities for the construction of flying saucers or wormhole-threading devices, but the number is actually quite tiny when thinking about one of them being advanced enough to visit us. These systems could house microbial life, which if found, would be the biggest science story of the 21st Century. But that find would have no bearing on supposed UFOs. Discovering the rough equivalent of a goat on an exoplanet would be more noteworthy and carry more profound consequences, but it would still not explain glowing aerial orbs. And even a civilization advanced as what Earth will be in 4018 would likely be insufficient to manage this interplanetary journey.

Furthermore, these supposed travels would seem to be serving little point. They do not involve the mid-20th Century Hollywood staple of requesting an audience with our leader. The landings are in the Nevada desert or on a remote hilltop, never in Times Square. While there are alleged eyewitnesses that board these crafts, no souvenirs are collected, no clear imagery of the visit is obtained, and no goodwill ambassador stays behind.

So these interplanetary interlopers travel all this way and are content to flatten crops, maintain an extensive rectal probing program, and make cameos in wobbly cellphone videos. Some extreme believers say aliens are with us in disguise and are interbreeding with humans while taking the form of shape-shifting reptilians who occupy executive leadership and high government positions. They makes these extraordinary claims without satisfying Carl Sagan’s stipulation that they be accompanied by extraordinary evidence.

These claims are also a reflection of the times. There were no reports of these close encounters by contemporaries of Socrates, Leif Ericson, or Jane Austen because the idea in those eras would have been so absurd no one would have ever dreamt it. Only with the advent or rocket technology and the works of H.G. Wells and Jules Verne did the notion of interstellar travel come along, and with it, the idea of trips coming from the other direction.

Shostak rejects the notion that the most recent video equates to proof that these trips have been made. He said 90 percent of sightings can be identified and he told Mosher they usually involve “issues with camera hardware, unfamiliar optical effects, atmospheric phenomena, bright stars and planets, and the presence of unmanned aerial vehicles.”

The other 10 percent are of undermined origin, meaning that they are unexplained, not that the explanation is extraterrestrial. To make the E.T. deduction is to commit a logical fallacy by claiming that absence of evidence equals evidence of absence. Specifically in this case, the assertion is that since the flying object cannot be explained terrestrially, that means it must have come from outer space. This is not a sound conclusion. For one, it fails to consider that the object may have come from inside a hollow Earth.