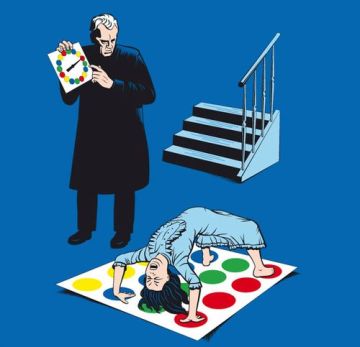 Dr. Steven Novella is a leader of the skeptics movement and in this capacity regularly has to fend off damage done to the name of his employer, the Yale Medical School, by his coworker, Dr. David Katz. The latter uses the university’s reputation and resources to endorse all manner of unproven techniques and procedures and then calls them medicine.

On top of this, Novella has now another prominent man with Yale ties to do battle against. Dr. Richard Gallagher, a Yale alum psychologist, has expressed belief in demon possession and has found sympathetic forums in CNN and The Washington Post. The issue is not so much Gallagher’s belief as it is his dangling of his education and scientific background to try and bolster this contention. As we will see, this appeal to authority is only one of a half dozen logical fallacies Gallagher commits in making his case for diabolical disturbances.

CNN’s piece this month featured extensive quotes Gallagher fed to credulous interviewer John Blake. It also contained a token appearance by Novella, who is only mentioned beginning in the 63rd paragraph. Up until then, Blake had unquestioningly allowed Gallagher to talk of persons levitating, objects flying off shelves, victims speaking perfect Latin, and a 90-pound woman throwing a 250-pound man across the room.

The CNN piece is less evidence for demonic possession than it is for Gallagher being in possession of fallacious thinking skills and faulty reasoning.

For example, he claims that allegedly possessed persons display hidden knowledge, such as how the exorcist’s mother died or what pets he owned. But this could be explained through cold reading. As to demonstrating unexpected strength, Novella noted this would not be unusual for someone hyped on emotions and fueled by adrenaline. As to the Latin, there is no telling if the person had ever studied the language, nor is there reason to suspect this would be a favored method of communication among Satan’s soldiers.

There is also the sizable issue of all this being hearsay. Gallagher provides no video evidence nor any other means of documenting his extraordinary claims. It is reasonable to expect more proof for claims of flying people and objects than a person saying it happened. There is no way to try and corroborate his tales or examine them for signs of trickery, hidden accomplices, or fabrication.

Further, even if these phenomenon had occurred, they are unexplained and it is the appeal to ignorance to fill in that gap with invisible visitors from the underworld.

Other than the anecdotes about defying the laws of gravity and physics, the cases cited by Gallagher are explicable through cold reading, educated guesswork, selective memory, and subjective validation.

What Gallagher lacks in evidence and substantiation, he makes up for in ad hoc reasoning. Specifically, he says demons won’t submit to lab studies or video analysis because they want to sow doubt, not confirm their existence.

To this, Novella retorted, “Skeptics will recognize this a special pleading, otherwise known as making up lame excuses to explain why you don’t have any actual evidence.”

Similarly, Gallagher credits demons with being tricky and able to avoid persons when they choose. Novella notes this is nearly identical to the rationale offered by aficionados of other unverified phenomenon. They claim aliens are too advanced to allow themselves to be observed, that Bigfoot has mastered stealth, that psychic powers are dulled by a skeptic’s negative vibes, or that western medicine is incapable of testing its eastern counterpart.

Novella reports that he has seen scores of videos of alleged exorcisms and they all lack any spectacular footage. No unimagined strength, no spinning heads, no sudden recitation of a dead tongue, nobody taking flight, no little girl slamming a man into the wall with a flick of her wrist.

Again, Blake tosses a bare bone to skeptics near the end of his story by giving Novella a brief say. But even this is followed by Gallagher being allowed to respond to his opponent’s criticism, while the token doubter is afforded no such luxury. Then the story ends on a sympathetic note for the exorcist.

I have noticed a decline in CNN’s standards. They still put out lots of good products, but allow themselves to be taken in by the occasional tripe, so this story was none too surprising. By contrast, I was saddened to see that the publication responsible for the Pentagon Papers and exposing Watergate had allowed itself to become a venue for such topics.

In his Post column, Gallagher gives passing praise to skepticism and science before veering sharply into the appeals to personal incredulity and ignorance. He wrote,  “The subject’s behavior exceeded what I could explain with my training. I could only explain it as paranormal ability.”

A basic distinction of the skepticism and science Gallagher had earlier alluded to is that an event being unexplained does not make it inexplicable. Nor is the observer granted carte blanche to fill in the blanks with the answer he favors. For evidence to be of any value, it must be attained through the Scientific Method.

Toward the end of his column, Gallagher fires off two more logical fallacies. He commits the appeal to consequences by bemoaning, “Those who dismiss these cases unwittingly prevent patients from receiving the help they desperately require.” And those psychologists who encourage mentally ill patients to engage in guerilla warfare against furtive monsters are committing malpractice.

Gallagher completes his traipse through the fallacy landscape with an ad hominem, calling skeptics “closedminded, “vitriolic,” “unpersuadable,” and “materialist.” Even if all that is true, it provides zero evidence that demons are being conjured on  Gallagher’s couch.