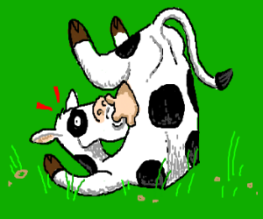 I once had the occasion to be staying in the remote Mongolian countryside. Emerging from my ger and moving across a backdrop of steppes and yaks, I made my way to a rugged farmer sitting on a three-legged wooden stool and milking a cow by hand. Mesmerized, I gazed at those hands, worn and beaten by 64 central Asian winters, and toughened by as many years of fence building, log splitting, and his current undertaking of drawing lactose products straight from the source and depositing them in a steel container. I remained captivated by this rustic, pristine scene until from the farmer’s flannel jacket came the ring of a cell phone.

That smacked me right back into 2010. While the ancient scene had been charming to me, it was presumably less so for the subject. To him, the milking was a daily chore as opposed to a quaint anachronism for a wonderstruck tourist. The liquid product itself is also the subject of some unjustified love. To raw milk advocates, gulping the contents of the Mongolian farmer’s bucket would be preferable to the homogenized, pasteurized, refrigerated variety most of us buy at Hy-Vee and Jewel-Osco.

I’m assured by both raw milk advocates and detractors that there is a difference in taste and texture between the two kinds. But we are unconcerned here with those qualities and want only to examine health claims the advocates make, both for raw milk, and against the pasteurized versions.

In pasteurization, milk is heated to about 165 degrees for 15 seconds, then immediately cooled back down. This kills microbes like bacteria, funguses, and algae, thus ensuring that dangers like salmonella and e. coli are zapped.

Though most associated with milk, pasteurization is applied to other food and drink in order to extend shelf life and improve safety. Still, opponents insist the brief heating gets rid of not only harmful microbes, but also of nutrients.

It is true that Vitamins B1, B12, C, and E are in reduced through pasteurization. But even raw milk contains these only in negligible amounts. Nutrients in fat and lactose comprise the majority of milk’s benefits and those remain unaffected by heating and cooling. Going from very little of those four vitamins to even less is an acceptable tradeoff for the safety that pasteurization brings.

Milk is usually fortified with Vitamin D, and some raw milk advocates falsely claim this is done in order to replace the Vitamin D that gets lost through pasteurization. However, milk does not naturally contain Vitamin D and dairies only started adding it in the 1930s as part of the public health campaign to battle rickets.

On another issue, raw milk proponents correctly note that the bacteria lactobacillus, which aids digestion and helps convert sugar to energy, disappears during pasteurization. But this is fine, as the body naturally produces adequate amounts of it.

There is a second claim that strictly speaking is accurate, but fails to tell the whole story. Advocates say pasteurization kills probiotic bacteria that can eliminate harmful bacteria like salmonella and e. coli. This is true, but irrelevant since pasteurization kills dangerous microbes, and indeed, is the whole reason the procedure is undertaken. If it removes innocuous microbes as well, that’s inconsequential collateral damage. Besides, while different strains of bacteria sometimes do battle, it’s hardly as simple as the Good Bacteria in White Hats always vanquishing the Bad Bacteria in Black Hats. Either one can win if they are left to fight it out, whereas pasteurization eliminates the problem.

Moving from the true-but-misleading to the just-plain-false, there are assertions that raw milk can cure eczema, asthma, and allergies. The notion is that bacteria in raw milk can prep a child’s immune system and protect them if such conditions arise. Brian Dunning at Skeptoid noted this describes how vaccines work and wrote that “if it were possible to vaccinate against eczema, asthma, and all allergies, then drug companies would have done it decades ago for immense profits.”

After pasteurization comes homogenization, a process in which fat particles are sent through a fine strain and broken into small pieces. This serves to make the fat level consistent in every drink of milk that anyone takes. Hence, homogenized milk is uniform throughout, while the raw version has an upper layer which is fat and light, then a heavier layer underneath.

Homogenization impacts taste and texture, but has no bearing on health, nor does opting against the practice. There were alarmist claims about homogenization increasing the chance of heart attacks and digestion problems, but these assertions withered after being subjected to clinical trials.

Raw milk inherently makes bacterial infection much more likely than the pasteurized variety. According to the CDC, four out of five dairy-based outbreaks come from raw milk or cheese. This is an especially high percentage since only a tiny amount of dairy products consumed in the U.S. are raw milk and its byproducts.

I liken drinking raw milk to regularly consuming intoxicating quantities of liquor. Chug away if you like, don’t give it to your kids, don’t pretend scientists say it’s beneficial, and don’t be surprised if the impact on your body is excruciating. I’ll stick with pasteurized milk. Not only is it safe, you can also get it in chocolate.