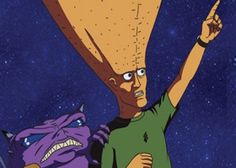 A large set of skulls that look like they could have belonged to the Saturday Night Live coneheads was found several decades ago in South America. There are three competing versions for their origin, one each for fans of Cosmos, Ancient Aliens, and Benny Hinn.

The isthmus of common ground between the three camps is that Peruvian archaeologist Julio Tello discovered a few hundred mummies in the Paracas region in 1928. Fascinating as archeology can be, it usually holds little interest among non-practitioners, but these finds attracted more notice because of the greatly elongated skulls of some of the mummies. Anthropologist and geneticist Jennifer Raff explained that “many ancient societies in North and South America practiced cultural modification to the crania of their infants, resulting in distinctive skull shapes in the adult population.”

There is strong historical and archeological evidence for this, but about 80 years after the find, some creative explanations were finagled. One claimed that the skulls did not belong to homo sapiens but rather to alien-human hybrids. An alternate position to this alternate position was that the skulls were instead a confirmation of a few cryptic lines in the Old Testament.

Arguing for the hybrid angle, David Childress and Brien Foerster wrote the cumbersome-titled The Enigma of Cranial Deformation: Elongated Skulls of the Ancients. They suggested the skulls came from a highly-distinctive breed of creatures, a position they based mostly on a statement from 19th Century physician John James von Tschudi. He is quoted as saying he had seen a third-trimester fetus with a head as long as an adult’s.

But archeology blogger Keith Fitzpatrick-Matthews investigated this and discovered this to be the result of either confusion or obfuscation on the authors’ part. The quoted doctor was referring to a cranium whose enlargement was much less pronounced than the mummified skulls that Tello unearthed. Tschudi was trying to find evidence for his hypothesis that there was a lost Andean people whose distinctions included slightly elongated skulls. An engraving of the baby showed it not in utero, but wearing a kilt while sitting in a position consistent with Andean mummies.

Foerster somehow managed to convince a museum employee to let him borrow some of the remains, and he claims to have had the human tissue dated through DNA analysis, which Fitzpatrick-Matthews says cannot be done. At any rate, this supposed testing involved no examination by anthropologists, archeologists, or biologists, and no input from natural history museums or university research teams.

Instead of a peer-reviewed journal, his findings were announced in a Facebook post quoting an anonymous geneticist. This secretive scientist said the discovery revealed an entirely new breed of creature, not quite human or ape, nor even related to any known Earthly being. There is no animal that accounts for the totality of a Phylum, yet this is what Foerster’s mystery man (or woman or alien hybrid) was asserting. These creatures were also said to be cursed with the inability to breed with any other animal, with the resultant inbreeding leading to their extinction. Exclusive inbreeding among a small population might doom a species. But saying it took place in this case represents piggybacking on legitimate science by shoehorning in an unsubstantiated ad hoc explanation instead of finding one through sound research.

Skeptic leader Sharon Hill outlined further problems with Foerster’s approach. “Science doesn’t work by social media,” she said. “Peer review is a critical part of science and the Paracas skull proponents have taken a shortcut that completely undermines their credibility. Appealing to the public’s interest in this cultural practice we see as bizarre – skull deformation – instead of publishing the data for peer-review examination is not going to be acceptable to the scientific community. Peer review exists to point out the problems that were missed by investigators.”

Additionally, ancientaliensdebunked.com noted that the scant information offered in the Facebook post revealed nothing about which skull was tested, what method was used to extract the DNA, how contamination was avoided, or how results could be replicated.

Meanwhile, there are those who prefer a supernatural explanation to an extraterrestrial one. The Nephilim are referenced in Genesis as being the offspring of “sons of God” and “daughters of men.” These vague terms lend themselves to many interpretations and these have included Foerster-friendly space aliens, fallen angels, giants, and descendants of Adam and Eve’s third son, Seth.

The Biblical descriptions seem to suggest the Nephilim were the result of sexual encounters between demigods and young women. This is obviously unattractive to adherents of a religion based on unbending monotheism, so these verses are mostly ignored by evangelicals and Catholics. Even the uber-apologist Answers in Genesis can merely hem and haw its way through a non-explanation before concluding, “No one really knows what it means.”

Well that’s pretty boring. A more exciting deduction is that the Nephilim were about 36 feet tall, with six of those feet in the neck, sporting bony arms and massive torsos that were supported by three thick legs. That’s the interpretation of various sources, including Alex Jones’ infamous InfoWars site, which praised the Foerster announcement as “another example of scientific evidence piling up that the Nephilim actually lived.”

L.A. Marzulli expounded on this idea in his book Nephilim: Hybrids, Chimeras, and Strange Demonic Creatures.

Raff noted a series of blunders Foerster committed but which Marzulli ignored. This included failing “to sequence his own DNA, and that of the archaeologists, biological anthropologists, and anyone else who may have handled the remains, in order to rule out that any results might be inadvertent contamination from them.”

Overlooking such blunders enables Marzulli to announce to his credulous audience that the DNA “is not from an autochthonous Native American maternal lineage” and that it “fits the timeline of the diaspora from the Levant of Promised Land perfectly.” In his tale, the Nephilim traveled from the Middle East to the Mediterranean, then to Barbados, and onto Peru. In short, he extrapolated one unsubstantiated DNA sample into a tribe of giants with funny heads trekking and sailing from the Middle East to the Andes while leaving no trace of their journey.

As to skeptics like myself, Hill, and Raff, Marzulli wrote, “They’ll come up with every excuse imaginable in order to keep the evidence from the public.”

This claim of repression is typical of pseudoscientists and is the opposite of what we are doing. We want to see the results and to determine how they were obtained. We want to ensure the evidence is complete and can be revealed as either accurate or mistaken.

In doing this, Fitzpatrick-Matthews outlined reasons to believe the skulls belonged to neither transient behemoths nor intergalactic sightseers. Some of his main points were: 1. The mummies were wrapped in embroidered wool consistent with South American textiles. 2. They were positioned in a manner associated with Andean mummies who enjoyed exalted status during life. 3. Their resting places were adorned with ceramics specific to the region. 4. The tradition and method of producing the conical-shaped skulls is well documented.

For retorts, Nephilim-believer Michael Snyder pointed to Goliath as proof of giants, while the alien-hybrid enthusiasts at thegreaterpicture.com argued that “the humanoid-reptilian species Anunnaki have long skulls.”