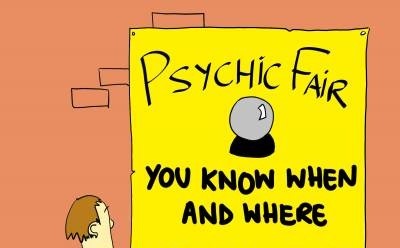 Yesterday, I hit the Quad Cities Psychic and Paranormal Expo, my third trek to this annual gathering of bioharmonic healers, crystal peddlers, and ghost stalkers. Last year, I went to as many booths as I could and related my experience at each. This time I wanted to choose one to concentrate on and relate the results in greater detail.  With so many purveyors of pseudoscience, alternative medicine, and clairvoyance to choose from, the potential for amusement seemed brighter than the auras that were being read.

At a shaman’s station, the despcriptive posterboard proclaimed that he would remove traumatic imprints and enhance enlightenment centers. But it also noted that these were only half sessions, so presumably my enlightment centers would receive only a truncated improvement and the traumautic imprints would only be partially exorcised. That seemed like paying for half a tonsillectomy or root canal, so I continued to stroll.

I next tried an astrologer, who told me that the time of one’s birth determines which planet will most impact a person’s life. Maybe mine is Saturn, hers is Mars, and the past-lives reader in beads, purple hair, and crescent moon dress at the next booth is Jupiter. Curiously, the one planet that would seem to have the most impact on all of us, Earth, is irrelevant to all this. I asked the astrologer how those who are most affected by Pluto were impacted by its downgrade to dwarf planet status. She seemed uncertain what I was referring to, but I wouldn’t expect Neil Tyson to know the inner workings of Sagittarius horoscopes, so perhaps we can forgive her ignorance of astronomy.

From there, it was onto the mediums, those who claim they can communicate with the dead. This took some time since these were by far the most popular tables and longest lines. People want to think they’re hearing from their loved ones or are having an issue resolved and these nattily-attired ghouls provide these assurances.

They always give the answers the recipient wants, the recipient in turn praises the experience to others, and the cycle continues. I asked the mediums if they could speak with those who had passed on and they all assured me they could. I asked if they could reach my older sister. That I never had an older sister would serve as an immediate, handy test of their abilities. They all said yes, with one cryptically offering, “Whoever brought you here knew to bring you to me.” Well, I brought myself and I knew I was going to seek out mediums to see if they could pass the most basic test, so I guess she was right.

Watching them dream up stuff about a person that never existed would have had comedic value, but not $50 worth so I moved on. I decided to attend a class on intuition that was free and being taught by the woman who arranges and coordiantes the expo.

She identified herself with the moniker Mystical Moonspinner and declared, “I am a psychic medium.” Stepping from beyond the podium, she turned to us Muggles and asked, “How do you know if you’re intuitive?” Hmm, well if it’s real, I would guess your intuition would tell you.

Moonspinner, however, suspected that everyone has intuitive abilities but that they can be repressed.

“Most everyone is born with intuition,” she said. “You will sense things when you are a child. Maybe the imaginary friends aren’t as imaginary as we think.” That’s what I’ve said, too. Of course, I was 6 when I said that.