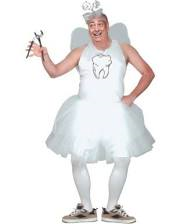 When my children put teeth under their pillow, they wake up with substantially more money than I did at their age.

If attempting to ascertain why, I could examine various factors, such as whether the amount the Tooth Fairy leaves has kept up with inflation, if the Fairy values incisors more than molars, and if the time in between lost choppers impacts the amount left. I could query 1,000 children, analyze results for socio-economic trends and determine if there is a correlation between the frequency of Tooth Fairy visits and the sell of home security systems. I may even endeavor to conclude once and for all if the Fairy is male, female, or androgynous. The findings could be put in a snazzy hardcover book with impressive graphics and detailed footnotes. Yet none of this would establish that a stealthy, mobile spirit is replacing extracted calcified objects with cash.

Tooth Fairy Science refers to doing research on an unverified phenomenon to determine what its effects are, rather than to ascertain if it exists. It is post hoc reasoning in research form. The phrase was coined by Dr. Harriet Hall.

This shoddy science is a regular feature of studies into ghosts, cryptozoology, reincarnation, alien visitors, alternative medicine, parapsychology, and creationism.

I have three co-workers who believe our office is haunted. Curiously, this spirit only manifests itself when the workers are by themselves at night. Perhaps he is nocturnal and dislikes crowds. We have ample video and audio equipment in the office, and we could set these up and record what times bumps most occur, detect any unexplained shadows, and note any high-pitched whistles. This data could by analyzed and a conclusion reached about the ghost’s characteristics. But this would not take into account wind, pipes, electromagnetic interference, or a worker on floor above coming in at 11 p.m. We would have to assume the ghost’s existence and attribute these factors to it.

Similarly, cryptozoologists will shoot sonar into Loch Ness or look for disturbed vegetation in Bigfoot’s supposed stomping grounds, then attribute any findings they consider consistent with their monster to be proof the animal was there. As such, they do not consider other explanations, such as the sonar detecting a bloom of algae and zooplankton, or a warthog beating Sasquatch to the trap.

That’s because when Fairy Tale scientists uncover data that is consistent with their hypothesis, they assume the data confirms it. For example, psychiatrist Ian Stevenson spent years collecting stories from people who claimed to be reincarnated. He used these anecdotes to support his belief in reincarnation, and he used reincarnation to explain the stories, a textbook case of circular reasoning.

Moving onto alien abduction, John Mack talked with persons who claimed to have been taken by extraterrestrial beings. He assumed the stories to be real instead of considering that he might have implanted the ideas by asking leading questions, such as, “Was the alien about four feet tall,” as opposed to “How tall was the alien?” The mental state and susceptibility of the subject was not considered, nor were explanations like fraud, attention-seeking, or sleep paralysis.

Alien abductees aren’t the only subjects that spend time on a Tooth Fairy scientist’s couch. So do alternative medicine patients. Chi, meridians, and blockages are assumed to exist in “energy” medicines such as craniosacral therapy, iridology, therapueitic touch, reflexology, chiropractic, Reiki, Ayuvedic, and more. I have addressed the rest of these in previous posts, so we’ll address Therapeutic Touch here.

First, Therapeutic Touch is neither. The practitioner’s hands are close to the patient, but are never on them. As to the therapy part, practitioners claim to be able to sense a patient’s “human energy field” with their hands, then manipulate the field by moving their hands near a patient’s skin to improve their health. Scientists have detected and measured minute energies down to the subatomic level, but have never found a human energy field. Nine-year-old Emily Rosa designed a controlled test of the practice which Therapeutic Touchers failed spectacularly. Any seeming success is because of the fluctuating nature of many illnesses, the placebo effect, confirmation bias, and nonspecific effects. The latter is a common error and refers to confusing the effects of practitioner-patient interaction with the supposed effect of the treatment.

In a test that proponents claimed proved Therapeutic Touch’s validity, researchers gauged the effects of the technique on reducing nausea and vomiting in breast cancer patients receiving chemotherapy. All patients were on the same chemotherapy regimen and they were randomly divided into three groups of 36 patients. The first group received usual Therapeutic Test treatment, the second group got a similar treatment except the practitioners’ hands were farther from the patients, and the third group received no treatment. A single practitioner performed all the treatments, which was fatal to conducting a proper study because he should not have known which patients were receiving which treatment.

Since there is no evidence the energy field exists, there can be no evidence that how far the practitioner’s hands are from the patient would make a difference. The alleged energy can’t be measured, so there’s no reason to believe any energy was transferred to, or benefited, any patient. While the authors claimed the study showed Therapeutic Touch worked, they had failed to establish that the central feature of the practice even existed.

Likewise, parapsychologists are quick to point to rare instances of a subject performing better than chance as proof that various forms of ESP are legitimate. Unsatisfactory results are considered as the power being unable to be accessed due to cosmic interference, negative energy from a skeptical observer, or some other ad hoc reason. They look to justify the failure as owing to a particular cause rather than the cause being that the power doesn’t exist.

Then we have the creationists. The Institute for Creation Research website informs us, “The very dependability of each day’s processes are a wonderful testimony to the design, purposes, and faithfulness of the Creator. The universe is very stable. The sun always rises in the east and sets in the west. Earth turns on its axis and always cycles through its day at the same speed every time.”

All of these phenomenon are explicable through known laws of physics and astronomy, and the ICR has affirmed the consequent by saying if there is order in the universe, there has to be a god controlling it, and since we see that order, a god exists. They attribute any majesty to this deity without bothering to prove his existence first. It’s one thing to do this as faith in one’s religion. It’s quite another to claim this as science while bypassing the entire Scientific Method.

I’m going to have to wrap this up. My daughter lost another tooth so I’ve got more research to conduct.

One thought on ““The tooth comes out” (Tooth Fairy Science)”