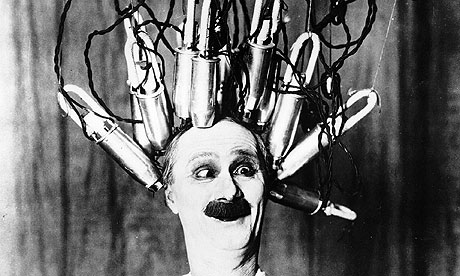 Asserting that there is a mysterious and unproven energy form at our disposal is one of the most frequent lines in New Age and alternative medicine circles. The precise term varies, but proponents claim to have access to a secret healing force that can be yours for $29.95. These purveyors of magic pixie dust have as their predecessor a German immigrant to the United States, Wilhelm Reich.

In the 1930s, he proposed the concept of orgone energy. While he predated today’s crystal and Reiki healers by a few decades, his ideas were not entirely original. He coopted the unscientific notion of a life force from acupuncture and chiropractic. Reich described orgone as massless, omnipresent, and associated with inert matter. We’ll have to take his word for it because no one else could ever detect it. Reich also held that deficits or constrictions in orgone energy within people caused disease. The idea of unblocking mystical energy as a form of treatment is seen today in countless alternative medicine practices.

Trying to figure out what makes the universe operate, Reich came up with the idea of bions, which he described as self-luminescent, sub-cellular vesicles that were omnipresent and observable in decaying material. Someone had to be the first person to think that planets revolve around the sun, to contemplate the existence of atoms, or to postulate about String Theory. However, these were all the starting point for potential discoveries. They were not dogmatic beliefs that were honed while working mostly in isolation. The first proponents of heliocentrism, atoms, and String Theory did not label disbelievers conspirators or fools. They followed the Scientific Method, laid out their ideas and welcomed input, including critical questions. Coming up with an idea about how the universe works is fine; the way Reich followed up on his notion was not.

During this subsequent work, he asserted that orgone was a “primordial cosmic energy” responsible for the sky’s color, gravity, the nature of galaxies, and even nonscientific ideas, such as why political revolutions fail. He seemed to use orgone energy as a fallback to every unexplained mystery in astronomy, biology, chemistry, and physics. It is similar to the god of the gaps argument, whereby a person will insist that since we don’t know why something happens, it must be the work of a supreme being.

Reich was once testing his hypothesis that if sterile dirt and coal are soaked long enough, they will give spontaneous rise to bacteria and amoebas. Then an assistant accidentally prepared a sample with sterilized ocean sand instead of dirt. Under a microscope, the sample gave off a blue glimmer. Reich gave this sample to a radium physicist to test, and the physicist reported that he could detect no radiation being given off. Reich therefore concluded that he was seeing a previously undiscovered form of radiation. In truth, the blue glimmer was likely the result of focusing light through a lens, and this incident highlights the importance of submitting work for peer review, rather than just concluding that you and Igor have accessed a secret power.

Not content with his status as a self-appointed microbiology pioneer, Reich attempted to start his own branch of medicine. He devised a therapy he said could tap into orgone energy, using as assemblage of boxes, blankets, and hand-held devices. It was not unlike the products marketed today as energy bracelets and ionic jewelry.

There are few orgone proponents left. One is orgoneproducts.com, which offers an enormous assortment of gadgets, gizmos, and what-is-its. One of the many is an orgone pyramid. The website’s description of the object is one of the most concise assemblages of pseudoscience giveaways I’ve ever come across. In one paragraph, it squeezes in the idea of a panacea, a spectacular claim, and allegations of a cover-up: “The possible uses for this device are only limited by your imagination. For less than the cost of a doctor’s visit, you could have the end of all disease. What have you not heard of orgone? Because the AMA was scared of losing its monopoly on medicine, so it conducted a witch hunt which led to Dr. Reich’s death in jail.”

The website maintainers, therefore, bravely risk their lives to sell a zapper that will cure Lyme disease and end those inconvenient comas. New Age medicine practitioners and conspiracy theorists may maintain cordial ties, but they are generally segregated from one another. But this site blurs, then completely obliterates any distinction between the two camps. For instance, one of the website contributors informs us that, “Hurricane Irene was another artificially-generated HAARP hurricane” meant to kill and terrify thousands.” But our intrepid orgone super heroine was ready.

“In preparation of the storm, I want down to the East River and prayed to the moon god. Then I hid a mini orgone chembuster in the shrubbery.” With an assist from this grassy knoll and a lunar deity, she and the orgone piece foiled the plot. “The winds were expected to be over 100 mph, but never gusted about 25 mph,” our anonymous reporter gloated. “Orgone does more than just change the weather. It actually changes the dimensions vibrationally so that negative events like this won’t happen. Quantum changes within the matrix occur when we project and maintain high energy states.” She referenced energy, vibrations, quantum, and matrix, but left out chakra balance.

Next, she explains that while G-men and their Illuminati compatriots can create disastrous weather, they are unable to control its direction without our inadvertent mind control. Our fears and anxieties attract the artificial hurricanes, tornadoes, and earthquakes. But never fear, these piffling volcanoes and such can be thwarted with orgone pellets. Also available are healing discs, anti-chemtrail spray, and magic toothpaste. Then there’s colloidal silver, which the site advertises as being able to cure HIV, Ebola, tuberculosis, diphtheria, diabetes, gonorrhea, well pretty much every disease ever discovered, and probably even a few that haven’t been. The product description notes that the ancients cited colloidal silver as being able to smite werewolves and vampires, and indeed, I don’t see those monsters around anymore.

One other site hawking orgone ornaments is natures-blessing.com. Other than offering some chemtrail busters, this site embraces the peace, love, and unicorns aspect of orgone. Displayed most prominently is a Chakra System Orgone Pendant, which will get your aura reception system in working order. Other pendants promise to give wearers the vision of a shaman, open their third eye, and allow them to chit-chat with dolphins.

If there are still more gold doubloons in one’s New Age budget, one can augment these potent pendant powers with crystals, and take advantage of their “natural ability to arrange energy and direct energy flow,” as well as revive dead orgone. Yes, beware, for orgone has a negative side. If orgone energy dies, the ghosts will cause you to experience sickness, fatigue, headaches, confusion, and depression. And since everyone experiences these at least sometimes, it shows how widespread orgone deficiency is.

The sales pitch just had about had me hooked until it mentioned that the pendants can be used as distance healing, so I’ll just take my treatment that way.