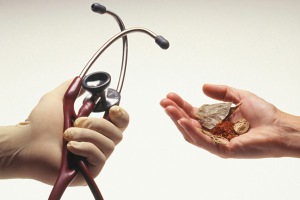 Because people don’t like being sick or seeing their loved ones suffer, alternative medicine is always going to find fertile ground, literally if using sandalwood to cure dyspepsia.

Often, ancient (or allegedly ancient) mystic practices are updated for the times. For instance, a Shaman may use a beeping device to locate harmony imbalance. The most straightforward attempt I’ve seen at combining ancient nonsense with the modern is the bio-ching, a portmanteau of biorhythms and the I-Ching.

Biorhythms is the pseudoscientific notion that our lives are impacted by rhythmic cycles, usually said to be based on our birthdate. For example, one’s performance in an office presentation will be good, bad, or so-so, depending on where one’s biorhythm cycle is at. Meanwhile, the I-Ching is a form of Chinese divination based on a book with 64 hexagrams. Mixing the two superstitions are Roderic and Amy Sorrell, who wrote a computer program that includes 512 biorhythm traits that are randomly matched with an I-Ching hexagram. The results can be interpreted to tell you how to deal with your sore throat or mild anxiety.

For maximum results, $250 a day will get you into the Sorrell home for a deeper analysis. The price includes room, board, and access to 100 percent of the world’s bio-ching clinicians. For double the price, you get to stay on their houseboat, presumably providing access to dolphin telepathy.

But you may be able to avoid the bio-ching altogether if you first consult an aura therapist. These folks maintain the aura can foretell if the body is about to get hit with a disease, then preemptively zap it.

Types of aura therapy include therapeutic touch, a form of hands-off energy healing, and aura-somatherapy, which is not a parody despite being described thusly: “a holistic soul therapy in which the vibrational powers of color, crystals and natural aromas combine with light in order to energize and harmonize the body, mind and spirit of mankind.” I tried mixing many of the words in this sentence and noticed it didn’t change the meaning any. The new sentence: “a harmonizing spirit therapy in which the holistic mind and vibrational powers of natural color and crystals combine with aromas to energize the soul of mankind.”

For those who prefer medicine that goes beyond two empty hands, we have laser wand crystals, which center on “detecting disturbances in the auric field.” It is described as using the crystal’s electromagnetic field to balance the aura and protect the patient by preventing disease from striking in the first place. I rubbed one of these on me at the psychic and paranormal fair and haven’t had a disease since!

While at the fair, I frequently heard peddlers tell me they just felt the energy or sensed the power. These are decidedly unscientific ways of deducing illness and finding cures, and with these techniques, claims are limited only by the imagination. That’s how you end up with lines like “accessing the meridian of the primary chakra to unblock the flow of auric energy.” Trying proving someone did NOT do that.

If promising to balance chakras or restore harmony, there is no way to test these claims. You can’t tell if it failed or worked. But if using alternative techniques to cure or mitigate pain or illness, they might occasionally seem to work for a number or reasons. For one, many illnesses and discomforts are cyclical, and may have run their natural course or be in lull.

Also, the attention from a caring, mysterious healer can make a person feel better, at least mentally. This can enhance the placebo effect, where suggestion, belief, expectation, and reassessment can seem to make a difference and perhaps even lead to physical changes.

I am sometimes asked, “If the patient thinks it’s working and feels better for it, what’s wrong with using it?” What’s wrong is that the patient may later opt to use these techniques to deal with a more serious condition. Persons have died when using energy healing, crystals, and dieting to battle diseases that could have been cured with real medicine.

Also, patients may credit the alternative treatment if it’s used in conjunction with genuine medical care. This again raises the danger that they may later use the alternative practice exclusively, owing to convenience, price, or comfort. Since they’re not medicine, alternative treatments are free from side effects, overdose, and addiction. Their practitioners are also much less likely than a doctor to acknowledge deficiencies. A shaman at the fair who incorrectly diagnosed me with upper back pain blamed the failure not on himself, but on the room’s unbelieving, negative energy. Must have been the one I brought with me.