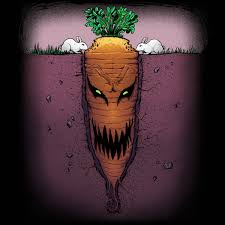 In the interest of balance: GMOs cause massive tumors and famine, rupture children’s digestive systems, and drive Indian farmers to mass suicide. Using seeds improperly is worse than the Holocaust.

Now that I’ve presented the other side, here’s mine.

Genetically Modified Organisms are plants or animals altered by the splicing of genes and the insertion of DNA from one species into another. The goal is transfer properties that have agricultural benefit.

We will concentrate only on plants, since no GM animals are sold for food. One example is golden rice, made from genes of maize and a common soil bacterium. The benefit in this case is food rich in beta carotene, which helps bodies produce Vitamin A. Genetic modification can also yield food that is softer, tastier, healthier, longer lasting, more resistant to pests, and less susceptible to drought. Compared to traditional plant breeding, there is less risk of concentrating natural toxicants since far fewer genes are transferred.

Because persons with allergies could be affected, all GM foods must be approved before going to market. In one case, a gene from a Brazil nut was transferred into a soybean. When serum from persons afflicted with nut allergies was introduced, a positive reaction registered, so the product was never sold. In another instance, a corn variety was also declared unfit for human consumption because of a potential allergen. This highlights two key points. First, there are safety controls in place. Second, any danger is going to be to a specific engineered food, so condemnation of all genetic modification is unfounded.

Most of those doing the condemning claim to prefer natural foods. Those people never had to eat the original tomato. University of Buffalo biochemistry professor Mark O’Brian called agriculture, “the manipulation of nature to meet desired ends.” He pointed out that a bright red, perfectly ripe, delicious tomato is “a biologically distorted, genetically engineered product of human innovation derived from a small, hard, poisonous fruit created by nature.” Similarly, the original carrot was dark purple and not near as high in beta-carotene.

Ray Comfort and Kirk Cameron have a YouTube video in which they declare the banana to be proof of God. Their evidence is its nonslip, biodegradable wrapper, a shape angled to enter the mouth, and a color scheme letting the consumer know if it’s not ripe, too mushy, or just right. Indeed, the banana is the result of intelligent design, but by farmers and scientists. What Comfort and Cameron tout as a divine miracle was once tiny, nasty, green, and full of large, hard seeds.

In short, there’s nothing natural about the foods we eat. Instead, cultivation is mostly artificial selection, with farmers saving the best plants from the year’s crop to provide seeds for the next season. After a few thousand iterations, we get tonight’s dinner. Genetic modification takes that idea and runs with it at light speed. Scientists can do in a few months what nature might have taken a few million years to accomplish.

Metadata from 12 long-term studies and 12 multigenerational studies met the conclusion that, “The studies reviewed present evidence to show that GM plants are nutritionally equivalent to their non-GM counterparts and can be safely used in food and feed.”

Meanwhile, University of California-Davis geneticist Alison Van Eenennaam and research assistant Amy Young reviewed 29 years of livestock productivity and health data from both before and after the introduction of genetically engineered animal feed. Van Eenennaam and Young found no increase in illness or disease, and concluded that GM feed is safe and nutritious.

Anti-GMO types, of which Mike Adams of Natural News is the most outrageous, don’t care for this science so they make up their own. While he and his ilk hawk scores of alleged studies and papers attesting to GMO dangers, none of them have appeared in scientific peer-reviewed journals. Another trick is to cherry pick quotes from genuine research in order to distort the findings. Adams’ efforts have put Natural News at the top of several lists of the Top 10 Worst Anti-Science Websites. Adams claims agribusiness is out to poison us all, aided by compliant scientists, doctors, and reporters. He encourages his followers to murder those expressing pro-GM views.

Despite engendering this murderous rage, causing alarmist terms like Frankenfoods to enter the lexicon, and being the subject of dire warnings and outright lies, GMOs haven’t harmed anyone. Opposition to them is another matter. Presidents of Zambia and Zimbabwe preferred to let a famine rage rather than allowing GMOs to be imported.