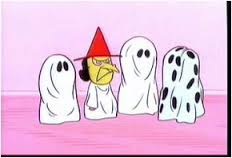 The chilling image darts across the surveillance video, a vaguely human-looking figure gliding past the police station entrance in Espanola, N.M. The video made the national rounds, being aired on CNN and Good Morning America.

Enter professional skeptic and spoilsport Benjamin Radford to ruin everyone’s fun. Radford was able to detect that the image was an insect walking across the camera lens, a far less spooky six-legged creature. Radford deduced that the bug’s smooth movement indicated its weight was being distributed on more than two legs. Another tipoff was that the image cast no shadow.

While this was another fruitless ghost chase, the field is burgeoning. But in spite of countless books, video cameras, cell phone photos, TV shows, and institutes dedicated to finding ghosts, there is not even agreement on precisely what they are. This makes finding, capturing, and tagging one all the more difficult.

Ghosts are usually described as being the remains of a person that has died. Most often, they are thought to be stuck in a netherworld border checkpoint, unable to attain a higher level of existence. However, there is no evidence that this higher realm exists, nor for that matter, that there is a post-mortem labyrinth for them to be stuck in.

In some attempts to modernize ghost-hunting, assertions are made that these spirits are energy of the deceased. But during decomposition, a body’s energies are released into the environment. So the energy does endure, and that is as close to a positive spin that I can give to anyone desperate to find evidence of an afterlife. But there is no reason to believe the energy continues in any recognizable form, or that it passes to another state of consciousness.

Since ghosts are largely undefined, they are freed from the laws of physics and chemistry, and can do whatever a ghost hunter wants them to do. Indeed, ghostly appearances have changed over time. In the 19th Century, even clothes had ghosts and their owners appeared very similar to what their Earthly incarnations did. They were generally transparent, levitating, and had wide freedom of movement, but they looked much like they did when alive. These ideas were consistent with the era of Dickens, Poe, and Washington Irving. Similarly, the notion that a ghost resembled a floating white sheet likely came from burial cloths laid on the dead.

Later, ghosts became less concrete, such as how they were portrayed in The Amityville Horror. Today, white orbs in digital photographs are the most frequently cited evidence of ghosts.

Other examples of alleged evidence are cold spots or breezes, a funny smell, or a sense of being touched. All of these are explicable through mundane reasons. A draft in a 19th Century castle is consistent with the abode, not evidence of a ghostly presence.

Animals are sometimes credited with having a greater awareness of ghosts, an idea doubly good for the believer since it is esoteric and impossible to disprove. Come to think of it, the idea is triply good for pet psychics.

The Winchester House in California is said to be haunted, as are abandoned prisons, asylums, and castles, along with graveyards. There is no reason to think a ghost would be in any of these places, as opposed to lurking around a ranch house near the end of a cul-de-sac, but it fits the narrative better.

Other evidence cited includes photos and videos, but these images are attributable to camera flaws, bad photography, misinterpretation, and fraud.

One of the more common methods used today is electronic voice phenomena. These are popular among believers since body noises, rustling clothes, wind, creaks, whistles, stray radio signals, whispers, camera sounds, and magnetic interference can all be interpreted as ghostly. A more incredulous observer would be asking, “How does an immaterial being bump into something or make a noise while walking (or even walk, for that matter)?” Or, “How does an entity lacking vocal chords and a tongue shriek and babble?”

Trying to put a scientific spin on the field has backed ghost hunters into a haunted corner. If ghosts can be scientifically detected or recorded, there would be irrefutable evidence of it by now, either by happenstance, or through the thousands of endeavors that have attempted to do this very thing. By contrast, if ghosts are unable to be detected in photos, videos, and audio recordings, any supposed proof though these mediums is no such thing.