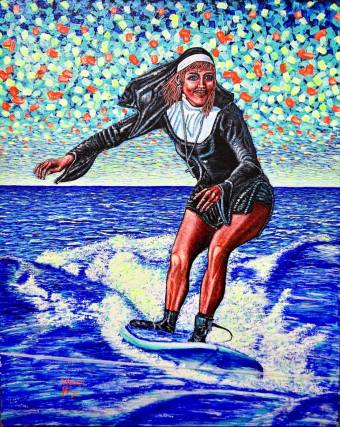 In the post, a wowed, anonymous person declares, “The two bodies of water never mix with each other, allowing the Gulf of Mexico to retain its clear, blue color. Simply amazing! That just proves that their (sic) is a GOD!!!! Who else can let WATER meet and touch but NEVER mix together???? #illwait.”

While she is willing to wait, we won’t spend time here imparting a lesson on circular reasoning or affirming the consequent. Rather, we’ll jump right into the science.

The image shows a dead zone, called hypoxia, off the coasts of Louisiana and Texas in 2015. This unintentionally-manmade phenomenon occurs when high levels of nutrient runoff make their way into the Mississippi River. This causes tremendous amounts of nitrogen to be disbursed when the river empties into the Atlantic Ocean. These nitrogen levels cause overgrowth of algae and other vegetation that deplete much of the oxygen from the water, kills fish, and causes the adjoining bodies of water to assume different colors.

Don’t plan your vacation around seeing this. Dead zones change each year based on a weather conditions, wind speed, and a water’s nutrient level. This means there is no permanent divide between the Mississippi River and the Gulf of Mexico.

When it does occur, it’s mostly because the majority of the ground in the Mississippi’s watershed is farm land. Seventy percent of the nutrient loads that cause hypoxia result from agricultural runoff that occurs when rain washes fertilizer from the land into a stream or river.

Additionally, urban areas that border the Mississippi continually deposit treated sewage into the river. Between the rural and urban contributions, about 1.7 million tons of nitrogen and phosphorous are deposited, and this is crucial for phytoplankton growth.

However, this also leads to ecological harm. It causes massive phytoplankton blooms to occur, which in turn leads to a large increase in zooplankton that feed on them. Large amounts of dead phytoplankton and zooplankton waste then accumulate on the ocean floor and the decomposition of this matter depletes oxygen in the area faster than it can be replaced. Put another way, if this is God’s doing, he’s displaying his wrath, not his wonder.