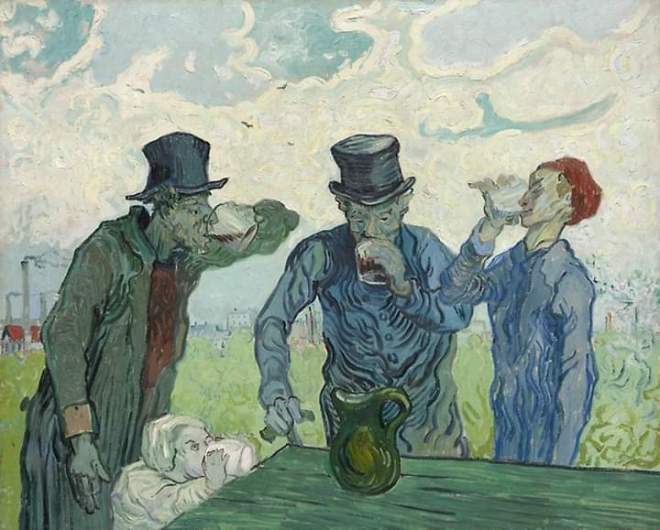 During my days in Germany, an acquaintance of mine would rave about absinthe, which he longed to imbibe on his upcoming visit to the neighboring Czech Republic. He would alternate between hushed and excited tones when speaking about the licorice-tasting libation and he was especially fascinated by its hallucinogenic qualities.

Alas, his trip was cut short, as he failed to procure a passport and was turned back at the border. In another misfortune, he later earned a lifetime ban from the local opera house for his drunken vomiting in the aisles.

I’m unsure if the long-sought absinthe was his drink of choice that night, but if so, it would have added to the list of legendary stories associated with the liquor.

One of those myths is its supposed place of origin. Despite my crony’s explanation, it is not a product of the Czech Republic, but rather of Switzerland. The Czech fallacy formed when unscrupulous and/or opportunistic merchants swindled tourists by fraudulently stamping “absinthe” on bottles containing all manner of greenish-bluish liquids following the Velvet Revolution.

There are many other misnomers, such that it leads to insanity, hallucinations, convulsions, and even death. Artists and writers like Van Gogh and Hemingway insisted it gave them more creativity. Despite being slurped by these icons, absinthe was largely associated with society’s dregs. Western Europeans considered wine and beer to be high society drinks brimming with healthful benefits. Meanwhile, absinthe was considered detrimental and the domain of the lower classes, the crack of alcoholic drinks. Its surly reputation, combined with the prohibitionist movement, led to it be being banned in several countries.

Detractors equated its consumption with subsequent criminal acts and it was blamed for juvenile delinquency and the general loosening of morals.

Especially impactful were the murders committed by Jean Lanfray, who slew three of his family members after gulping two absinthe shots. Prudence and rationality were victims of post hoc reasoning and a hysterical populace, and legal proscription of absinthe ensued.

Lanfray was an extreme alcoholic who drank primarily wine, and he had consumed liters of the stuff the day of the murders, along with cognac and brandy. Yet somehow two absinthe shots took all the blame.

At the forefront of this moral panic was worry over thujone, which is derived from the grande wormwood, an absinthe ingredient. Detractors castigated thunjone as being responsible for deleterious effects.

But this would only have been possible if a drinker ingested it at far higher quantities and concentrations than anyone ever has. Even then, the effect likely would have been limited to convulsions. For, despite the hype, absinthe has never contained hallucinogens or opiates.

With a schlock tactic that that portended the U.S. drug war, French psychiatrist Valentin Magnan plied animals with an essential oil of wormwood, causing the literal and figurative guinea pigs to suffer seizures.

However, the oil contained a much more concentrated dose than what an absinthe drinker would ever consume. The victim animals received an exponentially larger amount, and horrified audience members demanded that the drink be outlawed. But they failed to eliminate it entirely and seven decades later, drunken opera buffs were still seeking it.