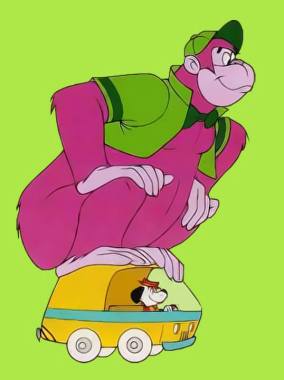 In the densest jungles of the Democratic Republic of the Congo, there is said to lurk a relative newcomer to the ape family. Witnesses have described the beast as large, upright, aggressive, and distinct from both chimpanzees and gorillas. It is called the Bili ape, after the forest in in which the animal is said to live. While eyewitness reports are considered weak evidence for validating the existence of a new creature, some of those witnesses brought back a potentially strong piece of evidence in the form of primate skulls purported to be neither chimp nor gorilla.

The story begins with what sounds like the first line of a joke: An author, a photographer, and a bushmeat activist walk into a museum. There, they saw skulls that, again, seemed to be not quite gorilla or quite chimp, but something in between. According to the display’s text, the craniums were collected in the Bili-Uéré region by late 19th Century colonists. Intrigued, the photographer from this trio, Karl Ammann, flew to DRC in in 1996 and found potential confirmation of an undiscovered ape. The primate resembled a chimpanzee but was larger, grayer, and behaved like a gorilla. It slept on the ground, whereas chimps usually snooze in trees to avoid predators. Ammann collected a skull from a deceased specimen and noted that it resembled a chimpanzee’s, except that it was larger and had a satittal crest akin to a gorilla’s.

This potentially exciting find was put on hiatus for a few years because of the Second Congo War. But in 2003, Ammann returned to DNC accompanied by scientists and an experimental psychologist, Dr. Shelly Williams, who had received a $20,000 research grant from National Geographic. There followed a slew of stories based on Williams’ reports, most of which dutifully pronounced that a new great ape was amongst us. Citing the animal’s facial features, body idiosyncrasies, and utterances, Williams decreed the animal to be either a new species (the most thrilling possibility), a chimp-gorilla hybrid (still pretty cool), or a new chimp subspecies (meh).

But, again, Williams’ doctorate was in experimental psychology, not in zoology or biology. That itself does not mean what she said was wrong, but it calls into questions National Geographic’s incentive in presenting her as a Ph.D. and letting readers assume it was in a related field to what she was commenting on. Her doctorate may also explain why outlets like CNN and the Associated Press didn’t ask more probing questions about her claims and just assumed she was a subject matter expert.

However, her claims were subject to immediate peer review in the form of responses from the biologists, primatologists, and anthropologists who accompanied her on the trip. This group of 13 scientists uniformly rejected her interpretations. And scientists currently in the Bili region are no longer reporting any sightings of hybrid apes or their corpses.

One of the scientists who accompanied Williams was Thurston Cleve Hicks, who presented the results of DNA analysis at the International Primatological Society in Uganda. Results from three laboratories show that the Bili apes are ordinary members of a common Eastern chimpanzee subspecies, Pan troglodytes schweinfurthii. He also reported he saw them behaving in a manner consistent with chimps, such as guttural noises and rudimentary tool usage.

This year, Hicks authored the definitive paper on Bili chimps in the official journal of the European Federation for Primatology. The paper mentions how their use of tools and some behaviors differ from other chimp populations, but makes no references to differences in appearance.

About the only physical traits of Bili chimps that are different from other chimpanzees are a somewhat larger head, a slightly larger build, and a tendency to turn gray earlier. But these are all the result of specific allele frequencies, which commonly causes slight differences in dispersed populations. So there’s no new animal here, and the credulous reporting about it is something we’ve also seen before.