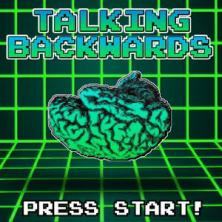 Reverse speech is an alleged form of cryptic communication which arises from the subconscious. Its primary (if not lone) proponent is David John Oates, who considers unconscious thoughts to be a repository of repressed truths, unvarnished honesty, and secret meanings. He asserts that the unconscious mind sends out backwards messages to the conscious mind every dozen seconds or so. Then the conscious mind straightness out the reverse message, filters it, and delivers it. To grasp the real meaning of speech, Oates says, we must tape it and play it backwards. If Oates has any peer-reviewed articles, written either forward or backward, to support these claims, he has yet to make them public.

Among his many unsubstantiated assertions is that toddlers learn to speak backwards before they learn to speak forward. He thus interprets babbling as being profound thought from the unconscious mind of a 2-year-old. Like pet psychics, Oates alone would be the one who could say whether it’s working or not and so he always has cover.

He likewise insists that since “reverse speech is the voice of truth, if a lie is spoken forward, the truth may be spoken backwards.” He adds this could help police learn where evidence is stashed or the name of criminal accomplice. This would be of limited value if the place or person were palindromic.

These ideas seem worthy of a toilet, and indeed, according to his biography, Oates gained this breakthrough knowledge after accidentally dropping a tape recorder in his outhouse or similar locale. After that, the recorder would only play in reverse and he took this unintended new toy to ridiculous heights. First, his interest was in finding Satanic messages in music. But devilish digeridoos are ever so trite, so he expanded his empire and deduced that with the right training (provided by him at a hefty cost), anyone could learn to detect the true message of forward communication. With no way to test or falsify this, Oates’ claims remain unproven, but this also provides him with a convenient out whenever challenged. He’s the only one who knows how it truly works, so who can question him?

Other Oates claims include: 95 percent of our thoughts are subconscious; Reverse speech can unlock hidden memories, reveal physical health, and show personality and behavior traits; Reverse speech can even touch the soul. But this is trying to explain one unknown, unproven entity by employing another. Further, it is an instance of Tooth Fairy Science, where one attempts to decipher how something without first ascertaining that it exists.

One of Oates’ bigger tricks is saying that reverse speech can be metaphorical or symbolic. This allows him to twist meaning into any utterance. And like psychics or mediums, he tells customers what they want to hear. If the person says they killed JFK, Oates can reassure them that it means they metaphorically killed their American History exam.

There is also the sizable matter of what evolutionary benefit there would be to reverse speech. When humans gained the ability not just to communicate but to formulate a language, it ranked up there with fire-making, wheel-inventing, opposable digits, and bipedalism as traits that put us on top. But there would be no value to the species if the true messages remained garbled and were a mishmash mess that would only be solved 100,000 years later by a 20th Century pseudoscientist.

Oates cheerfully plays the Galileo Gambit, wondering, “Have we not yet learned from the lessons of history? Many of our great discoveries have come from outside the mainstream. Einstein, for example, was a high school dropout.” This is majorly wrong. Einstein was booted from a school for nonacademic reasons before earning his Ph.D. The larger point, however, is that just because a person was ridiculed in the same manner as Newton or Galileo or Wegner was, that doesn’t mean the person shares any other trait with members of this trailblazing trio. (For a further critical thinking lesson on this, look up the Composition Fallacy). It was these geniuses’ use of the Scientific Method that eventually validated their ideas. If Oates wants the same recognition and vindication, he needs to follow the same path.

According to reversespeech.com, “If human speech is recorded and played backwards, mixed amongst the gibberish at regular intervals can be heard very clear statements.” This is a real stretch, though if one is inclined to listen to backward speech, one will occasionally be able to hear sounds that vaguely resemble known words, although most of it is completely unintelligible.

For the parts that might seem more like real speech, the power of suggestion and auditory pareidolia can come into play.  Oates offers no reason why only a small percentage of the speech would reveal secrets, nor does he offer any rationale for how all this would work.

While mostly comical, this highly creative interpretation of auditory gobbledygook can have tragic consequences. Writing for Skeptical Briefs, Mark Newbrook told the tale of a woman who interpreted her infant daughter’s backward babbling to be an accusation of child molestation against the father.

Newbrook further writes that the reverse speech hypothesis is fraught with “major methodological and theoretical problems.” For example, Newbrook states that Oates tries to make a distinction “between genuine Reverse Speech and phonetic coincidence, (which is) the accidental occurrence of very short sequences which are almost the same” forward and backward. Yet Oates is not consistent as to which sequences count as coincidental reversals.

A similar issue, Newbrook continued, is when “the reversal of the forward speech sequence yields another equally possible sequence,” such as would happen with the words “say” and “yes.” Oates considers such instances to not be reverse speech, but this is based on convenience, not empirical evidence. As Newbrook explained, “It is very important for him to exclude such sequences, because his theory implies that different speakers may produce different reversals of the same utterances, depending on their often covert attitudes.”

All in all, this makes for a backwards idea.