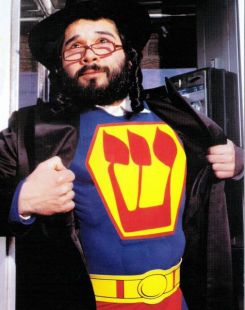 For the past few thousand years, there have been incessant accusations leveled at the Hebrew people. They are said to be crippling society, spreading disease, running a shadow government, running the real government, manipulating currency, weakening the white race, undermining the church, and plotting to swipe your grilled cheese.

They do all this as either communists, Free Masons, the Illuminati, Bohemian Grove leaders, Rothschilds, New World Order perpetrators, or Reptilians.

While anti-Semitism is most associated with the Nazis, Hitler and his monstrous minions were merely the most searing and extreme instance of illogical hatred toward Jews. In Persia, Xerxes ordered the extermination of all Jews within his jurisdiction. Roman emperors, Greek kings, and Spanish rulers have all given the same genocidal dictate. During the Dark Ages, panicked Europeans blamed Jews for the Plague. Pogroms have been regular features on the continent, as well as in western Asia, and there has also been legally-mandated discrimination, segregation, violence directed at synagogues, and cartoons that portray Jews in grotesque caricature.

Czarist Russia had anti-Semitism woven into its official policy since Jews were accused of fomenting a revolution from within. When the regime collapsed in 1917, it occurred without much Jewish involvement. Hitler used a similar tact, accusing Jews – who were less than one percent of the German population – of committing traitorous acts that cost the country victory in World War I. This alleged power out of proportion to Jewish numbers is typical of charges leveled at the people.

These charges have been sustained for many centuries, from Jews being accused of slaughtering babies for their blood during Passover in the Middle Ages, to their descendants engineering the 9/11 attacks. One myth associated with the latter is that Jews employed at the World Trade Center stayed home that day.

All this is led by an elaborate hierarchy. Sometimes names are given – a Soros, an Eisner, a Bloomberg – but many more unknown persons are assumed to be allies and lackeys in this quest for world dominion and subjugation of decent folk.

Even by the loose standards of this conspiracy theory, one of its more preposterous manifestations is in portraying The Protocols of the Elders of Zion as the Jews’ diabolical playbook. This has long since been exposed as a hoax, as it is a nearly-identical copy of The Dialogue in Hell Between Machiavelli and Montesquieu. This work was a satirical work centering of Napoleon III plotting to conquer the world. For Elders of Zion, Large sections were plagiarized, with “Jews” replacing “Napoleon III.”

Skeptoid’s Brian Dunning has identified three primary types of anti-Semitism. The first kind couches itself in a veneer of superiority. Just as a Klansman might consider Hispanics to be lazy, dirty, and justifiably destitute, there is an anti-Semitism that sees Jews as lowlifes, worthy of scorn but not to be feared except as criminals. This was the overwhelming type of anti-Semitism for millennia, but is the rarest type today.

The second kind rests at the opposite end of the spectrum and paints Jews as residing in a pit of avarice and cruelty, where they assume positions as our dark overlords who control the banking system and direct perpetual warfare for their benefit. Closely related to this is the belief in a Zionist-Occupied Government, where Jews make the law and institute policy, either for real or by proxy.

Finally, we have a religious anti-Semitism practiced by Christians and Muslims. Islamic distrust of Jews has been sustained for a millennium and a half and continues unabated. The practice of usury – oft times necessitated since Jews were forbidden to own property or run a business – was traditionally one of the reasons. That’s still the case, though the Israeli-Palestinian conflict is a much larger factor.

Christian disdain for Jewry was far more common 100 years ago. The Hebrew people were seen as messiah-denying, hell-bound heathens who slaughtered the savior. We don’t see this brand much anymore, as most American evangelical fundamentalists are convinced that blessings from the Abrahamic god will flow proportionally to the level of obsequiousness the U.S. displays toward Jerusalem.

However, there are some outside the Christian mainstream who prefer a more conspiratorial flavor to their worldview and who feel the end times will be ushered in by a Jewish anti-Christ. Additionally, there are some bigots without a religious bent who insist immigration is a Jewish plot to destroy the white race – a curious goal for a people who themselves are conspicuously light in melanin.

In an attempt to bolster their case, proponents of these conspiracy theories may point to the inordinate Jewish influence in business, the news media, and entertainment, but this is committing the affirming the consequent fallacy. It is failing to consider correlation and causation and other factors that can explain Jewish success in these areas. Also, this success does not mean it is used to realize a nefarious agenda.

Like other gloom-and-doom scenarios, the anti-Semitic one collapses under the weight of its extravagant claims. The fruition of those ghastly goals takes place in an Eternal Tomorrow, always on the cusp of happening, yet never quite arriving. To hear anti-Semitic conspiracy theorists tell it, there exists an incomprehensibly malevolent, highly-organized cabal of geniuses with supreme power and authority; It has at its disposal every means of manipulating commerce, trade, and militaries; It clandestinely pull the strings of legislatures, monarchies, industries, and the press. The end state is to solidify this power and bring the rest of us to our collective knees. Yet this has been said to have been the case for thousands of years and it never happens. These completely evil, supremely powerful people have had the means and desire to complete this dastardly deed, yet they all keep dying without it being accomplished. With those deaths, the theory should perish as well.