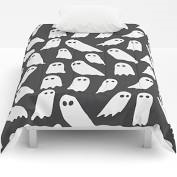 While most persons think of ghosts as spooky or non-existent, there walk amongst us those who see a more amorous side. They claim to have had romantic relations with spirits of the deceased, with a majority of such reports coming from the UK and Ireland. It’s not surprising that countries with deep histories and medieval castles would be home to such tales, if one can ever consider reports of sex between ghosts and the living to be unsurprising.

Playboy quoted Patti Negri, a self-described medium and spirit sex expert, who said, “They can go beyond your skin, in and out. It’s pure energy.” There’s that word again. In four and a half years of covering the paranormal, supernatural, and alternative medicine, I’ve learned I can never go five blog posts without one of the believers making an undefined reference to energy.

Ancient texts seem to allude to spirt/person romps. This includes references in the myths of many cultures to incubus, who are demons who have their way with unwilling women. Their female counterpart is the succubus. Whereas incubus are out to torment women, the succubus is said to inflict a slower demise upon its victim, who eventually succumb to deterioration of health and wealth. Whereas the incubus rape, the succubus seduce. This reinforces ingrained sexual stereotypes and serves as a morality tale against careless sex and a not-too-subtle description of females as being wily, cunning, and evil. It is comparable to the Biblical labeling of prostitutes as being foul temptresses who lead men to ruin, while their customers are reviled for succumbing to Satanic temptations of the flesh.

While ancient tales of ghost sex involved men and women, it seems to be only the latter reporting such occurrences these days. Actress Natasha Blasick, who appeared in Paranormal Activity 2, apparently practiced for the part by having some spirited sex, so to speak, and she opines that men may be experiencing this but are less included to talk about it.

She could be onto something. By way of comparison, an actress who comes out as bisexual may experience a career boost for doing so, while an actor likely would not. That’s not due to any more open-mindedness, but because there is a subset of society who find gay male sex revolting, but consider woman-on-woman action to be “cool” or something they can get off on. Such observation is hardly evidence that men are experiencing ghost sex, but Blasick could be right about them keeping it to themselves if they think they are.

If this belief is happening more often to women, it could be because they have concerns for their safety in dating and courtship that a man would not and this rectifies that. An added appeal is that this control allows the woman to take the experience wherever she wants.

While this might provide the desire to believe, we here prefer more scientific explanations. So let’s mention sleep paralysis, which occurs when the body emerges from slumber but the person continues dreaming, opening the possibility of nocturnal visions morphing into waking hallucinations that coincide with an inability to move. The latter is likely an evolutionary safety measure that prevents sleepers from acting out their dreams.

Another possible explication is hypnogogia, a dreamlike trance that produces auditory and visual hallucinations. This can lead to tingling and sensations of being crushed or suffocated, in addition to hearing noises that aren’t there and sensing the presence of an animal or humanoid.

Skeptic leader Joe Nickell posits that an individual’s disposition causes them to view these happenings through a personalized lens. A skeptic might think they experienced sleep paralysis, a Tarot Card and ESP enthusiast might think they’ve had sex with a ghost, and a UFO fan might think they’ve been probed. So the putative experience reflects the person. We can see it as something with a rational, scientific explanation, a horrifying ordeal, or a satisfying sexual experience that serves as a grown up version of having an imaginary friend.