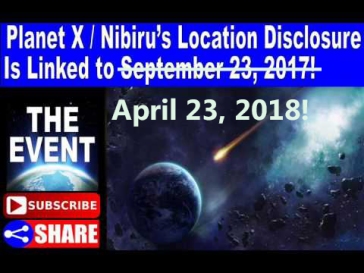 It’s just about time for this year’s end of the world. On April 23, Earth will meet its demise, courtesy the rouge planet Nibiru. Sometimes going by the more sinister-sounding Planet X, Nibiru brings together two normally disparate groups: End-time Christians and those who prefer a more alien or deep space flavor to their ultimate mass extinction events.

These groups normally don’t get along, though the antagonism is mostly from the former camp, whose members consider the other bunch to be messing with demonic gateways akin to astrology, fortune telling, and Ouija Boards. The star searchers, meanwhile, are normally indifferent to the religious pronouncements of doom, although some occasionally use Biblical interpretations to bolster their case. Such persons are notionally religious and have undertaken a conversion of convenience because they can use one small aspect of a faith to support their cause.

For example, self-described Christian numerologist David Meade has interpreted upcoming celestial arrangements as a “sign exactly as depicted in the 12th chapter of Revelation. This is our time marker.” However, most Christians reject such definitive statements as, “The world will end on April 23,” because of Matthew 24:36. This verse declares of Earth’s final moments, “About that day or hour no one knows, not even the angels in heaven, nor the Son, but only the Father.”  Still, a  minority of Christians see it otherwise and will point to verses which suggest that discernment and signs in the skies make it possible to know when God is about to call them home.

The latest Nibiru cataclysm – there have been many – embraces the biblical apocalypse angle. An alleged alignment of planets on April 23 is said to be referenced by Revelation, which tells of a “great sign in heaven: A woman clothed with the sun, with the moon under her feet and a crown of twelve stars on her head. She was pregnant, and cried out in pain as she was about to give birth.”

With their being no reference there to Earth, April 23, or the destruction of every man, woman, child, dog, ladybug, and fern, how does one manage such an interpretation? Elizabeth Howell at space.com wrote that Nibiru believers think the verse references the second coming of Christ and the advent of the rapture.

Hence, believers conclude that on that day, the sun and moon will be in the constellation Virgo, as will Jupiter. The latter is said to be a euphemism for Jesus, though this conclusion seems to be reached only because Jupiter will be in Virgo, not because there is any logical reason for our solar system’s largest planet to represent a Galilean Jewish religious leader.

In any event, Howell notes that celestial bodies will not be arranged the way doomsayers are expecting. “Jupiter is actually in Libra all day and night on April 23, while the moon is between Leo and Cancer,” she wrote. “The sun, out of view when Jupiter and the moon are in the sky, is by Pisces.”

While not occurring on April 23, the arrangement cited by believers does occur every 12 years, which would be a huge strike against the notion of it portending gloom and doom. This has led to an ad hoc rationalization that Nibiru represents the Lion of the Tribe of Judah, and that its addition to the alignment will push us over the cataclysmic brim.

This planet, for which there is no evidence of existence, is touted by enthusiasts as a rocky giant in a massive, haphazard orbit, which will eventually bring about our destruction, though the dates and methods keep changing. In fact, if we all wake up on April 24, the Nibiru doomsayers already have a backup apocalypse in place, as they say it is on target to pass near Earth in October and unleash volcanic fury. I’m not much on guessing the future, but somehow I think I’ll be writing about that prediction again in early November.