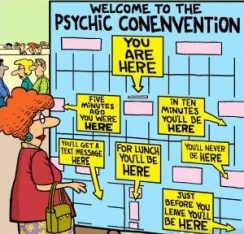 Each year, the Quad Cities Psychic and Paranormal Expo rolls into town. Another tradition is me having 86 cents in my expendable income account. That has kept me from paying for any paranormal products or psychic services, but I have some magic of my own and always come away from these events having gotten something for nothing.

My first stop this year was at an essential oils table, where I was assured the merchandise was “100 percent certified pure therapeutic grade, with nothing synthetic.” When it comes to the only oil I ever buy, motor, synthetic is a good thing, so I’m curious what this is all about.

I asked the two women what they could tell me about the oils and they inquired if I had any aches or pains. Indeed, my head was hurting so they referred to their chart that recommended peppermint. Later, I checked other essential oil businesses and websites for their headache cures and among those listed were lavender, eucalyptus, rosemary, spearmint, roman chamomile, magnesium, turmeric, frankincense, wintergreen, birch, jasmine, sage, marjoram, bergamot, ginger, and basil. By the time I tracked all those down it would be way past the four hours my headaches normally last and it would be gone anyway.

As to these ladies’ recommendation, per their instruction, I put a couple of drops on my fingertip and lathered up my forehead and the back of my neck. This caused a pronounced burning sensation, meaning the pains on the inside of my head were now matched by ones on the outside, so I at least had symmetry going for me.

“There’s lot and lots of science. Our company is all about science.” What they lacked in specifics, they made up for in enthusiasm and assurance, so I continued.

“If there’s an active ingredient in it, is there a chance you could use too much of it?”

“But if it has healing properties, I would think there would be a danger of overdose. If you take a bottle of Excedrin, you’d be dead.”

“But that’s not all-natural.”

“Natural could still do you in. Hemlock is natural, too. So with the peppermint oil, is there a way to determine the proper dose?”

There is a look I get from psychic and paranormal fair merchants when I start lobbing anything beyond remedial inquiries at them. They are used to being asked, “What can craniosacral therapy do for me,” not, “Can you explain the mechanism behind craniosacral therapy?” Questions about the science are answered with “lots and lots” as opposed to providing examples of peer-reviewed articles and double blind studies.

I got that look, which they then turned on each other. They traded stammers before one of them offered that I should start with a drop or two and work up to what works for me. Of course, if no amount worked, I would keep going until I overdosed, which is what I was trying to avoid.

I was about to make this point when one of them changed the subject by offering me oil-infused chocolate chip cookies. I can’t ask probing questions if I’m chewing on confectionaries. To wash it down, they handed me water with lemon oil added.

“What does this do for you?”

“It helps with dehydration.”

Water helps with dehydration. Really glad I’m not paying for this information.

Glancing at the comparison chart that recommends oils in lieu of over the counter medication, I asked, “So for body aches, instead of Tylenol, I should take chamomile?”

“Why not just take Tylenol?”

“Because ours is pure.”

Oh, that’s right, you told me that. I need to look and see what oil helps with memory.

I then made my way to another table, where I asked a middle-age bespectacled woman with shoulder-length blond hair what she was offering.

In a dreamy voice she intones, “Oh it’s wonderful. I love it. It holistically heals you from the inside. A week ago I got arthritis real bad and had Reiki done and I haven’t had it since.” There have been about 10 million such anecdotes in Reiki’s favor, none of them accompanied with an explanation for the mechanism behind it.  An eternal optimist, I hoped to be the first to track this down.

“It’s spiritual. It’s the universe. It’s the angels. It’s the spirit guides and all the energy they use to heal you.”

“What type of energy does it use?”

So someone would take my energy then give it back to me. Again, glad I’m not paying for these services.

Turning the subject to another of her offerings, I asked, “What’s energy clearing?”

“That clears away the energy we pick up from other people as you’re walking around or you’re living with them.”

“But that kind of contradicts the Reiki healing. Wouldn’t the energy clearing cancel out the Reiki energy you received?”

“No, it’s not connected. The energy that’s been cleared is low level. Depression, for instance, does not have a high vibration. The session helps to clear the clutter that builds up from negative thoughts and actions,” she told me. “Have you ever been talking to someone that just makes you sad for what the world has come to?”

Boy, she nailed that one. Why isn’t she manning the mindreading booth?

Moving on, I found a merchant who focused on a haunted house south of Buffalo, N.Y. He owns the house, he told me.

“Does anyone live in it? Besides the ghosts, I mean?”

“No, I’m fixing it up.” He’s probably using sub-contractors for the various tasks, like remodeling, wiring, and ghostbusting.

He further explained, “I’ve researched the spirits in this house and its history. There was a failed exorcism there, another guy died there. Some people left after two months. Another family got out quickly and left all their stuff behind. People have tried to live there but it’s hard.”

I tried living in upstate New York for a while, I know what you mean.

“How do you research it?”

“There’s lots of scientific ways of researching it. Then there’s the personal, the feelings you get when you’re there.” So he bases it on science and feeling, and I have a feeling he’s exaggerating the science part.

This fellow was giving a free (there’s that key word again) presentation about this, so I followed him into the speaking room. Wonder if all this makes me a paranormal investigator investigator.

Once there, he enthralled audience members (well, with one exception), telling tales about these spooky surroundings. He assured us, “There’s definitely a dark entity there.” I imagine that’s called nightfall.

His talk contained the phrases, “something’s holding the spirit there,” “there’s a portal in that room that can’t be closed,” and “spirits are crossing a threshold.” There was talk about “an Indian chief” and “a woman in white at the pond,” both of whom he reported capturing on film. He also related a story about how a K2 meter stayed lit when he attempted to contact a former resident. “There was no explanation for it,” he said.

That’s because he didn’t ask me. The K2’s purpose is not to enable the dead to communicate via beeps and flashing lights as you walk up creaking stairs. Its function is to detect electromagnetic radiation and indicate the radiation’s strength and direction. There is no evidence deceased homeowners have the ability to leave this radiation behind.

When I asked if the K2 meters were designed to chase ghosts, he said no but added, “When your body dies, energy can’t be created or destroyed. There’s still that energy somewhere. If you ask a question and it flickers, perhaps it’s paranormal.” And perhaps it’s from the cell phones, video cameras, and computers you brought in.

Other audience members asked questions like, “Are you worried about driving off the friendly ghosts and leaving only behind the evil entities,” and “If the house burned down, would the spirits go back out the portal?” Meanwhile, I got in a second question, about why ghosts in his photos would still be wearing clothes. He answered that they did that somehow, some way, so that people in the present could recognize them. By this point, I realized the peppermint oil wasn’t helping any and my headache had gotten worse.