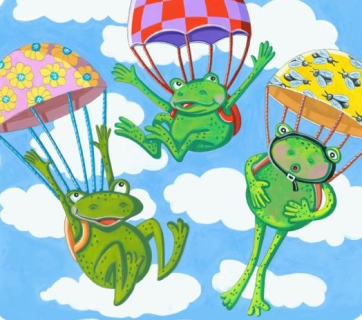 There have been sporadic reports worldwide for two centuries of frogs and fish plummeting from the sky. The most recent account came last month in Oroville, Calif., where elementary school teachers and students showed up to the sight of fish strewn across the playground and even on the roof.

No eyewitnesses reported seeing any falling aquatic animals, nor were any images of such captured on school security cameras. In most other instances, this is the case: Frogs and fish are seen en masse in places they normally aren’t, yet seldom do witnesses report seeing them fall, nor is there video or still shots of this happening. And it would seem that if a frog or fish were to fall from a high distance, the impact would splatter them, whereas most of these tales involve still-living frogs and fish that are dead but with intact bodies.

As to the cause, a few have suggested divine intervention, noting that frogs were among the plagues a angry Yahweh foisted upon the Egyptians. At the other end of the spiritual spectrum, some consider the animals akin to manna being sent from above. But a convergence of small, wet animals on the streets or in yards is more of an inconvenience than a curse. And the idea of consuming them seems less than appetizing, so these explanations fall flat, even more so considering the complete lack of evidence and testability that accompany them.

Most attempts to explicate focus on a more natural source, such as a tornado or updraft. The most common assumption that these or other extreme weather phenomena suck the animals out of a lake or river, then lift and drop them. Many legitimate scientific sources have pegged these as the likely reason.

Purdue University professor of atmospheric science, Dr. Ernest Agee, has said, “I’ve seen small ponds emptied of their water by a passing tornado. So it wouldn’t be unreasonable for frogs to rain from the skies.”

Such an explanation makes the most sense for instances where the animals ended up of roofs. The only other options would be a prank, which would be a lot of work for something not very funny, or a misfire during an attempt to restock lakes by plane, and there’s no more evidence for this ever happening than there is for the plague hypothesis.

But while extreme weather is a plausible reason for a few of the incidents, most of the instances came with no nearby tornado or updraft nearby. And again, many of the stories have involve frogs that lived, which would not be the case if they had been transported via tornado.

Many persons suspect waterspouts, which are tornadoes that form on land before traveling over water. But while their appearance resembles a typical tornado, they have much less power than one and would be incapable of lifting a cow, much less a carp.

Brian Dunning at Skeptoid explained: “The decreased air pressure inside a tornadic waterspout can raise the water level by as much as half a meter, but water itself is not sucked up inside. The visible column of a waterspout is made up of condensation, and is transparent. The high winds will kick up a lot of spray from wavelets on the surface, but the spray is thrown outward, not sucked up inward. Just below the surface of the water, things are undisturbed.” So these spouts have no mechanism to reach into the water, consolidate amphibians or other objects, then spew them skyward, where gravity takes over.

Dunning suspects most of the supposed cases of raining frogs and fish involve the animals never leaving the ground. Frogs do not migrate to the same degree that birds do, but the seasons do dictate which locale they prefer. In spring and fall, they move from shallow breeding ponds to deeper lakes. Being amphibians, they need to keep their skin at least moist, so they will often make these moves in the rain. Moreover, the frog army will march as one, perhaps crossing roads and fields. When an observer sees a heavy storm with thousands of frogs in places they don’t normally congregate, the idea that they came down with the rain can take hold.

This can even work with fish, as about three dozen species are capable of going overland for brief periods. Fish such as mudskippers have an organ which enables them to breathe in air, and they can walk using gill plates, fins, and tails. So witnesses may see a large school of fish flopping somewhere completely out of place, and the persons make the connection to stories of falling fish they’ve heard before.

Lending credence to Dunning’s idea is that it is almost always fish and frogs that are involved. Even comparable animals, such as lizards, crabs, and geckos never litter the streets in such a manner, and raining cats and dogs remains but a metaphor.