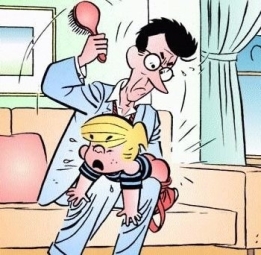 Nicole Arbour has become a minor Internet celebrity by videotaping rants about groups of people who are different than Nicole Arbour. Blacks, the overweight, and feminists have all been on the receiving end of her mocking monologues. Her most recent assault is on ADHD sufferers and their parents. The gist of her railing is that the disorder is make-believe and that unfit parents should be spanking their little hellions into line.

In actuality, Attention Deficit Hyperactivity Disorder has been a known clinical condition since at least the early 1900s. In his takedown of Arbour, skeptic blogger Emil Karlsson noted there are more than 30,000 articles about ADHD in PubMed.

Biological factors that contribute to ADHD include genetic variants of neurotransmitter receptors and transporters as well as differences in executive function that are related to memory and attention. Environmental factors may include brain injury, premature birth, and heavy lead exposure during pregnancy.

Arbour offers no research or a different interpretation of data. Rather, she is content to reject outright a swath of parents, make evidence-free claims that cola and cereal cause ADHD symptoms, and offer erroneous anecdotes. For instance, she claims the first person to describe ADHD eventually rejected his initial finding and concluded the disorder was nonexistent.

She is referring to Leon Eisenberg, who contributed to psychology’s understanding of childhood behavioral conditions, but ADHD had been identified 20 years before his birth. Second, Eisenberg never claimed ADHD was fictitious, he only thought psychosocial factors were more important than biological ones in causing the disorder. He therefore thought that pills to control the condition were being overprescribed. Most importantly, even if Eisenberg had said ADHD doesn’t exist, that wouldn’t make it true and wouldn’t override what the tens of thousands of papers and decades have research have shown.

Another Arbour claim, one frequently espoused in the anti-ADHD camp, is that the disorder is over-diagnosed in the United States. Critics will point out that six percent of U.S. children are identified as having ADHD, nearly 10 times what is seen in Europe, particularly France.

It is true that most American children diagnosed with ADHD would not be similarly labeled in France, while a child not diagnosed in France might be in the United States. But this is because the countries use different diagnostic systems and analyze different factors in making the determination.

In Europe, a child must show a sustained inability to adapt due to inattention, hyperactivity, and impulsiveness. In the United States, a child needs to show substantial impairment in just one of these categories.

Arbour uses the disparity when trotting out hackneyed claims of a Big Pharma conspiracy. Like most alleged conspiracies, it collapses under the weight of the ever-increasing number of participants who would need to be involved and stay silent for it to work. This one would have to involve pediatricians, school nurses, teachers, and psychiatrists working in concert to continue a sham for the benefit of shadowy pharmaceutical executives. Also conspiring would be parents such as Cristina Margolis, who blogs on issues related to ADHD.

In her response to Arbour’s characterization of parents like herself as lazy, coddling miscreants “who give kids drugs,” Margolis related her experience of being married to an ADHD sufferer and being the mother of one.

She noted that one of Arbour’s many mistakes was dismissing ADHD boys and girls as being nothing more than typical, hyper children. Margolis pointed out that hyperactivity is only one type of ADHD, with inattentiveness and a combination of the two being the others.

“Not all children with ADHD are hyper. ADHD affects people differently,” Margolis wrote. “When a child is diagnosed with ADHD, more coexisting conditions can arise as well, such as depression, anxiety, oppositional defiance disorder, and bipolar disorder. My then 6-year-old daughter told me she wanted to die. ADHD, depression, and all the other coexisting conditions are nothing to belittle and make fun of.”

This is not the first time that a public response has been warranted following a misinformation piece about the disorder. In 2015, blogger Matt Walsh labeled ADHD a myth, which prompted a detailed reply from Steven Novella of the Yale School of Medicine and president of the New England Skeptical Society.

Perhaps the most fundamental of Walsh’s errors was using “disease” and “disorder” interchangeably while failing to define either. Novella wrote, “ADHD is certainly not a disease. That term should be reserved for entities that involve a discrete pathophysiological condition. But in medicine, there are also clinical syndromes, disorders, and categories of disorders.”

Novella further explained that brain disorders are different than problems with organ systems that rely only on the health of cells and tissue: “Liver disease is largely caused by pathological processes affecting liver cells. However, brain cells also have other layers of complexity to their function, the pattern of connections, and the biochemical processes that underlie brain processing. To add another layer of complexity, part of the function of the brain is to interact with the environment, including other people and society. Because of this, medicine uses the concept of mental disorder to define a clinical entity in which a cluster of signs and symptoms relating to thought, mood, and behavior cause demonstrable harm.”

ADHD specifically is “a disorder of executive function, which is a definable neurological function that localizes to the frontal lobes. Executive function is what enables us to pay attention…and to inhibit behaviors that are not socially appropriate. Medication for ADHD improves function and outcomes and is cost effective.”

Walsh’s piece conspicuously lacked any of the technical terms and explanatory passages contained in Novella’s post. For instance, he wrote that because there is no magic line where the amount of hyperactivity and inattention crosses the threshold from normal to problematic, there is no disorder. That is the continuum fallacy and would be like arguing that because there’s no set number of drinks a person can have per week to go from a casual imbiber to a lush, there are no alcoholics. While not referencing the 30,000 PubMed papers, Walsh did highlight three doctors who agree with him, displaying a cherry-picking acumen that would impress the most robust climate change denier.

Back to Margolis, she wrote that the disorder is a lifetime sentence, but that it can be controlled with diet, accommodations at school, and medication: “I hoped our daughter would respond well to treatment without medication, but she was one of many who needed more help. That is what ADHD medication is: Help. With her medication, she is excelling in school and extracurricular activities, making friends, and has gained self-confidence.” Margolis thus describes her daughter as “thriving,” while Arbour calls her “a zombie.”