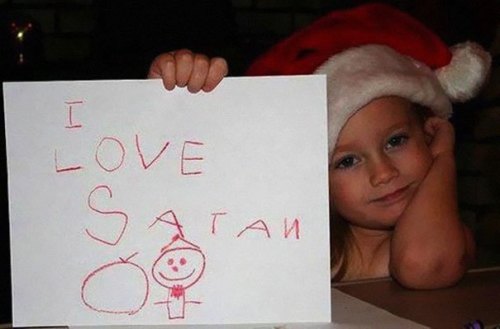 There is Sasquatch, Yeti, Nessie, and dozens of less-celebrated cryptos. But the most enduring monster whose existence has yet to be verified is Beelzebub, the devil, Lucifer, Apollyon, Satan, the Dark Lord. This many-monikered beast, unlike the rest of the monsters, is indirectly responsible for much misery.

Now, for being the embodiment of evil, the cloven-hoofed one has never harmed anybody himself. But there have been some who committed atrocities in his name, such as Richard Ramirez who went on a spree of break-ins, rapes, and murders with an inverted pentagram tattooed on his palm. There were a few others who did similar deeds, but the most frequent Satanic byproduct are baseless accusations made against someone.

Those took place in 17th Century Salem and continue today with Pizzagate. I saw one online poster who claimed that 800,000 children are snatched each year by Satanists. She was basing the figure on information provided by the National Center for Missing and Exploited children. But she was basing the reason for their disappearance on negative evidence, wild speculation, and filling in the sizable gaps with her agenda. While about 2,000 children a day are reported missing, this figure includes children who show up 45 minutes later to announce they had taken the scenic route home from school. It includes those who got hurt while hiking and are rescued four days later. It includes runaways, children who are abandoned by their parents, and those who are kidnapped by noncustodial mothers or fathers. Just 1.4 percent of missing children are taken by strangers, and most of these kidnappers worship another deity besides Satan or no deity at all.

So even if five percent of the kidnappers were Satanists, this means that six children are year are taken by devil worshippers, not 800,000. The poster had made the preposterous claim to bolster the case for her belief in Pizzagate – a tale twisted and bizarre even by the ridiculous standards of conspiracy theorists. This theory has expanded to potentially include any pizza joint, any business adjacent to a pizza joint, and anyone who even once patronizes these establishments. All this is said to be part of a nationwide kidnapping and child rape ring, led by Lucifer his Satanic sidekicks, Hillary Clinton and John Podesta.

This is a new twist on an ancient idea. The devil figured prominently in Paradise Lost. New Testament writers blamed him for sending a herd of pigs over a cliff and for causing people to fling themselves into a fire. He even appears to win an argument with the archangel Michael over an unspecified issue regarding Moses’ corpse in Jude –  perhaps the most unhinged, bizarre, paranoid, threatening, rambling, and doomsday-desiring book in the Bible. And though it was likely due to a translation error, Satan makes one cameo in the Old Testament when God permits him to destroy Job. The horned one even takes the blame for future carnage and calamity, in Revelation.

But our focus will be relatively modern. Anton LaVey penned the Satanic Bible in the 1960s and become a cult celebrity. He played the devil in Rosemary’s Baby in the 1970s, a decade that also gave us The Exorcist, The Omen, and cattle mutilations that some pegged on Satanists.

In 1972, Mike Warnke wrote a book in which he claimed to have previously been a Satanic high priest, a position from which he witnessed mandatory blood sacrifices, ritual rape, and child abuse. A few years later, Michelle Smith wrote Michelle Remembers, in which she insisted the she recalled seeing children kept in cages, adults having fingers sliced off, and even baby sacrifices. Neither Warnke nor Smith could provide any names and were unable to lead police to any perpetrators, victims, or corpses. This set the tone for what was to come: Over-the-top claims followed by panic and sometimes false convictions, but never a capture of any felonious Satanists.

Onto the 1980s, lowlighted by Geraldo specials and the almost-requisite inclusion of the adjective “Satanic” before the phrase “heavy metal band.” This, even though for every genuinely Satanic band like Deicide, there were 100 Judas Priests, for whom 666 was just another number. And for all the panic about devil worshippers, the damage was actually being done by child-molesting Catholic priests and Christian televangelists caught in a series of scandals.

A few wayward derelicts may have dabbled in the dark arts and performed a few silly rituals, but most were doing it for the thrill of being iconoclastic outcasts, not because they were truly evil. For instance, when I was 20, I saw a truck that had been spray painted with the slogan, “Kill For Satin.” It had been thrown on there by a hoodlum who was either linguistically-challenged or who was showing unusual fealty to smooth fabric.

To be clear, there were about half a dozen murders attributed to demons’ minions in the 70s and 80s, but this was uncovered by means of traditional law enforcement and confessions, not from the revelations of someone privy to the inner workings of Satanic cults or from daytime talk show investigations.

On Saturday Night Live, Jon Lovitz portrayed a devil who made failed attempts at wickedness, while the Church Lady chastised her guests for being under Satan’s spell. Indeed, much of this had a comic edge to it, but there was a much darker side that featured many ruined lives. Not ruined by Satanic cult members, who killed very few, and who certainly represented a microscopic percentage of the homicidal maniacs. Rather, innocent lives were ruined by the collective hysteria of parents, press, and prosecutors. The result was the loss of freedom for innocent persons accused of kidnapping, torture, sexual abuse and murder.

This Satanic Panic was an example of a moral panic, which Blake Smith of Skeptoid defines as “a cultural event wherein people become hypervigilant to a threat to the status quo and tend to throw reason and rationality out in favor of seeking protection from the perceived threat at all costs.”

A recent moral panic example would be last year’s glut of clown sightings. Past examples include the 1920s Red Scare, which was a virtual Commie lovefest compared to the House Un-American Activities Committee and Joseph McCarthy hearings 30 years later.

With regard to the Satanic Panic, it promoted the notion that organized cults of Luciferians were clandestinely controlling childcare facilities and using their positions to molest, murder, dismember, and torment.

The most infamous case was the McMartin Daycare trial. Judy Johnson’s 2-year-old son had a reddened rectum and trouble using the toilet, two facts which convinced her he was being molested at the daycare center. Other parents were asked to look for evidence this was happening to their children as well.

Toddlers barely old enough to talk were coached into giving the “correct” answer and, eager to please adults, did so. The paranoia was so extreme that Johnson even claimed her son had reported seeing daycare members fly about the room and many persons believed this. There were reports of secret tunnels and rail tracks beneath the daycare center that would transport the children to other buildings to be tortured and molested. Hot air balloons were offered as another means of transportation, though this would seemingly be superfluous for someone who could fly. Despite the ease with which such ideas as hot air balloon rental and subterranean transportation could be checked out, this wasn’t about logic or facts, it was about fear and revenge.

None of the McMartin defendants were convicted and some were never even formally charged, but some still spent years in jail, unable to pay the seven-figure bail amounts that were also part of the panic. It was at the time the longest, most expensive trial in U.S. history and it was all based on such notions as flying Satanic daycare workers.

This injustice was not enough to slow the paranoia. Dan and Fran Keller spent 20 years in prison after being convicted of molesting children at their daycare center in Oak Hill, Texas. Transportation again figured prominently in the case, with the victims allegedly flown out of the country to be molested in a Satanic orgy perpetrated by Mexican soldiers before being shuttled back in time to be picked up by their parents. Other claims were babies used as shark food and children being forced to watch the sacrificial slaughter of kittens and puppies. The Kellers were released when the doctor who had provided the only physical evidence at their trial recanted.

In both daycare cases, children ages 2 to 5 were asked leading questions and praised when they gave the desired response. They were even allowed to mix with each other in between giving testimonies and were encouraged to collaborate and come to shared conclusions.

A bizarre false confession led to another conviction, this time of Paul Igraham, whose daughter accused him of sexual abuse. Imgram was a committed Pentecostal who had no memory of the alleged attacks, but surmised that a demon must have seized control of him.

So when his daughter claimed to have been in ceremonies in which 25 babies were sacrificed and in which she was raped 800 times, he figured it must be true and that the devil made him do it. There was no physical evidence or other witnesses despite these horrors being allegedly being perpetrated by a large cult over many years. No matter in the era of the Satanic Panic, and Ingraham spent two decades in prison.

While these devilish tales took place in the 70s, 80s, and 90s, Pizzagate shows that the notion still has life. When it comes to getting people to act irrationally and believe the farfetched, few things can match the fear that the devil inspires. As our spray painting buddy would put it, “Satin rules!”