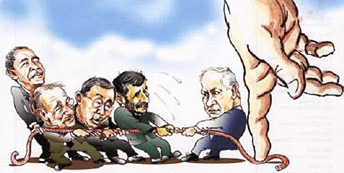 Post hoc reasoning occurs when a person wrongly assumes that because two events happened in succession, one caused the other. This is fallacious thinking because it fails to consider other factors that might be involved. Post hoc reasoning is common in alternative medicine because of the fluctuating nature of many pains and illnesses, and because persons are more apt to try unorthodox methods when the discomfort is peaking. That’s why reflexology, Reiki, and aura cleansings have plenty of glowing testimonials but no double blind studies or control trials to support these anecdotes. Post hoc reasoning is also regularly employed by horoscope readers and ghost hunters.

But the most extreme example I’ve come across is from prophecynewswatch.com. This website focuses on U.S.-Israeli relations, most often in the form of dire warnings of what will befall America if it betrays its Middle Eastern ally. After the U.S. declined to use its UN veto on Security Resolution 2334 on Dec. 23, the website posted a story headlined, “10 previous times America faced major disaster after attempting to divide Israel.”

Whether the U.S. had tried to divide Israel in these instances is debatable, but our focus here is on the claim that such actions led to American harm. We will go over a few examples and the entire list is here if you are hard-up to kill some time.

The ominous article wastes little time in getting to the post hoc reasoning. In the third sentence, author Michael Snyder warned, “Over the past several decades, whenever the U.S. government has taken a major step toward the division of the land of Israel it has resulted in a major disaster hitting the United States.”

Besides post hoc reasoning, this is also example of subjective validation, which is when something that is routine seems profound because it has personal meaning. Also at work is selective memory. Snyder thinks the U.S. has betrayed Israel, so he will be looking for signs that Yahweh’s wrath has been unleashed, and he will remember it if he thinks this has happened. But he will not remember instances where the wrath is seemingly withheld, nor times where wrath was seemingly leveled without a recent rift in U.S.-Israel relations. For example, there was no anti-Israel activity in the days immediately preceding Space Shuttle explosions, the Beirut barracks bombing, the King and Kennedy assassinations, or 9/11.

As to the disasters that did befall the U.S. for being insufficiently obsequious to Israel, here is some of Snyder’s list:

California earthquakes, Midwest tornadoes, and Gulf Coast hurricanes occur every year and require no invoking of the supernatural. They are explicable through what we know about meteorology and geology. And Clinton survived the Lewinsky scandal to serve out his second term, and while the revelation might have been a personal embarrassment, it was not a national disaster. This, however, is a minor point. The main point is that Snyder offered no evidence that any of these incidents were the result of foreign policy or of being an ungracious dinner host.

To demonstrate how fallacious his thinking is, let’s look at some times where the U.S. worked to benefit Israel, only to befall disaster shortly thereafter.

On May 14, 1948, the U.S. became the first country to recognize Israel. Later that month, the Columbia River dike broke, killing 15 persons and leaving thousands homeless in Vanport, Ore.

The Nixon Administration provided massive resupply support to Israel in the Yom Kippur War from Oct. 6-25, 1973. On Oct. 10 of that year, Spiro Agnew resigned. A few days later, Nixon ordered the firing of special prosecutor Archibald Cox. This led to the first calls for his impeachment and eventually doomed his presidency.

Writing about the recent veto declination, Snyder noted the president had previously used it and the U.S. benefited. “When Barack Obama blocked a similar resolution that France wanted to submit for a vote in September 2015, it resulted in America being blessed, and we definitely have been blessed over the past 16 months,” he asserted, conspicuously lacking to give even one example.

The 16 months in question featured the Pulse Nightclub massacre, the Flint water crisis, 13 dead in a California tour bus crash, multiple innocent civilians killed by police, and eight innocent officers killed in retaliation. There was also Hurricane Matthew, which killed 26 Americans. Two hurricanes made the author’s list of times the U.S. suffered for forsaking Israel, yet one also occurred during a time he said we were being blessed for adequate kowtowing.

Snyder also ignores when good fortune occurs in the wake of abandoning Israel. His list included Oct. 30, 1991, when Bush the Elder opened the Madrid Peace Conference, bringing Israelis and Palestinians together for negotiations. Snyder noted this was followed by the “1991 Perfect Storm” which killed 13 people and slammed waves into Bush’s Kennebunkport home.

However, the rest of 1991 also brought Terry Anderson’s release, the dissolution of the Soviet Union, indictments of two Pan Am Flight 103 bombing conspirators, and David Duke’s gubernatorial race defeat.

Snyder is so determined to cram disasters into his narrative that he ascribes Hurricane Andrew making landfall to the Madrid Peace Conference being moved to Washington, D.C., the day prior. However, this move came after weather forecasters had already said Andrew was barreling toward Florida.

Snyder closes by writing, “Barack Obama has cursed Israel by stabbing them in the back at the United Nations. According to the Word of God we should be cursed as a nation as a result. And as surely as I am writing this article, we will be cursed.”

I too can prophesize and according to the Scroll of Skepticism, Snyder will count the next unrelated disaster as fulfillment of his prediction.