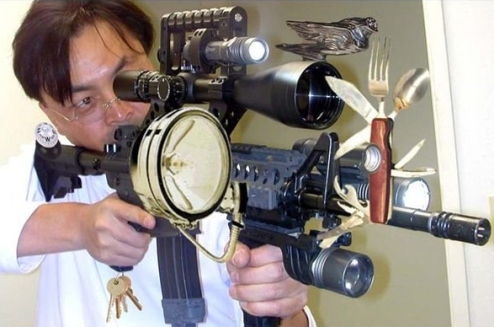 There are three primary explanations for supposed ghost photos. They could be the result of a defect, a hoax, or a ghost.

In the case of defects, the image normally looks like whatever ghosts are said to look like in a given time and place. Photographs of allegedly inexplicable bright orbs are sometimes said to be a person’s spirit, and such shots are frequent consequences of today’s technology. By contrast, the orb would merely have been a distraction in 19th Century photos since ghosts were then thought to be transparent, floating apparitions who kept their clothes on when they passed to the other side.

Hoaxes are easy to pull off today, but it is also easy for PhotoShop experts and other professionals to detect them. Before the ubiquity of cell phones and camcorders, still film images were allegedly the primary means for spirits and souls to manifest themselves. In truth, the science behind photography could always explain the anomaly. Even if a case ever came along that baffled the foremost photographers, it would not be proof of a ghost. It could be a world class hoax, an innovative photography technique, or something else. Passing it off as a ghost because we aren’t sure what it is would simply be negative evidence. If ghosts could be captured in still or moving pictures, we would see many instances of this, especially in morgues, hospitals, and scenes of fatalities. Photos and videos taken during and after 9/11, Oklahoma City, Waco, D-Day, and natural disasters are all ghost-free.

Which is why the final explanation is by far the least likely. Also, how a ghost would manifest itself on film or video has likely never been tested via the Scientific Method, and these ideas have certainly never been confirmed. Believers have likewise proffered no explanation for the process by which a person becomes a ghost. Even undertaking these challenges would be to embrace Tooth Fairy Science, which is when the specifics of a phenomenon are investigated before the phenomenon is confirmed to exist.

This shortcoming has been no issue for paranormal investigators. Ghost hunting has been around for at least two centuries, but séances with mediums have largely been replaced by a glut of programs on third-tier TV channels, YouTube, and other mediums. Besides small video cameras and phones, the hunters are invariably wielding an assortment of other electronic gizmos and doohickeys.

Most of these pieces do indeed function as detectors, as they are intended to detect light, heat, movement, or electromagnetism. The substantial problem arises when one interprets those readings as ghosts as opposed to readings of what they are meant to measure. There is no science to suggest that ghosts emit anything in measurable amounts.

So when ghost hunters uses an infrared thermometer or motion detector to pinpoint a cold spot in a room, they might find such a location. While there is no reason to think ghosts are responsible for temperature changes, those chasing them might be causing it since more persons in the room will raise the temperature. Changes are also caused by heating, air conditioning, insulation, studs, wiring, pipes, radiant heat, sunlight, and wind.

Another item, particle detectors, make infrequent appearances in ghost hunts. But as Brian Dunning at Skeptoid put it, “For a ghost to emit ionizing radiation, it would have to be an awfully sick ghost or be composed largely of unstable radioactive metals.”

EMF meters are said by hunters to detect ghosts, though this claim is never augmented with any suggestion of what the deceased wanderer’s power source is. Also, Dunning wrote that, “Given the massive amount of EMF pollution on a TV ghost hunting set, the idea of being able to detect the EMF field of a ghost who’s not carrying any batteries is ridiculous.”

Skeptic Kenny Biddle found he could set off an EMF detector with just a computer mouse. But what should be seen as a major flaw is seen as a plus by ghost hunters. Their devices are erratic, highly susceptible to false positives, and have blinks and beeps that make it seem to believers like something ghostly is happening. Throw in some strange sounds that seem even more frightening in a darkened castle or mansion and you’ve hit poltergeist pay dirt.

Though they haven’t been used much since being brushed aside by electronics, dowsing rods are still utilized by a few ghost chasers. Whether the rod moves, and in what amount and in what direction, is determined by the hunter, who also interprets and announces what this movement means. His claimed ability cannot be tested, measured, or duplicated by another person, nor has any dowser proposed a plausible hypothesis for how this would work.

Usually touted as the spookiest fruit from hunts is ghostspeak on audio. These mystic missives might seem unsettling, but that’s only because they are so garbled and distorted. They are drenched in static, vary in pitch, and produce an unpleasant sound that can come across as someone who is pained, scared, or angry. In the many thousands of hours of these recordings, we have yet to have a ghost articulately announce in plain language, “Here I am. I am the ghost of King John’s tailor.” Ghost hunters claim that their prey speak on a plain that can only be captured by recording devices, providing another example of how they fundamentally misunderstand what these items are for and how they work. The proof of ghostspeak is so tenuous it has  included rationalizations that the same ghost is speaking in different languages within the same sentence, or that it will speak backwards only some of the time.

The Atlantic related the tale of what was likely the first ghost story of the photography age. In 1861, William Mumler noticed the shadowy figure of a young girl on a plate he was developing. He knew the cause was that he had inadvertently reused a plate that had been insufficiently exorcised of its previous image. He showed it to his spiritualist friend as a prank, which the friend gullibly swallowed. When Mumler tried to explain what had really happened, the friend refused to believe it and even had the image printed in spiritualist publications.

This started a trend that continues today, as almost any new recording or electronic device can be used to further the ghost hunter’s agenda. Beginning with Mumler’s double-exposed photo, telegraphs, telephones, cassette recorders, radios, televisions, camcorders, the Internet, iPhones, and Fitbits have all been seized on by believers as a means to access the paranormal realm. The only medium they haven’t penetrated is a peer-reviewed journal.