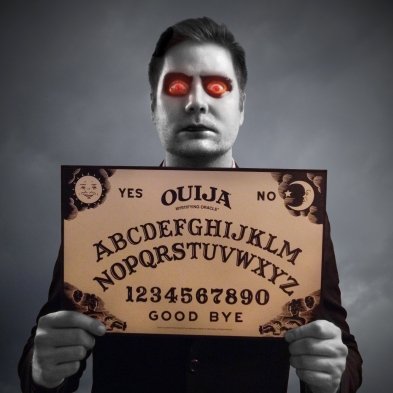 Many persons consider the Ouija Board to be harmless fun, but I disagree. It’s really not much fun.

In my youth, I never really got the thrill of sitting around asking questions of something that couldn’t answer. At least the Magic 8-ball offered a response. I was screwing around with the board once, which showed I had some naivete that it might work. But then I figured if a spirit really knew the answers it could move the planchette by itself. And if it were unable to move a light object a few inches, it wasn’t a very powerful entity.

Ouija sessions can be solo, but are usually done in groups, with everyone placing their hands gingerly on the teardrop-shaped planchette, which itself rests on a board. Imprinted on the board is the alphabet, along with  “yes,” “no” and “goodbye,” presumably so the spirit can tell us when he’s tired of fielding candlelit queries about deceased aunts and the cute new boy in algebra class.

The board was originally a fraudulent spiritualist tool in the 19th Century, then enjoyed a 1960s and 1970s heyday as a bonding experience for sleepover tweens. But among those for whom everything is either sacred or sinister, the boards helped summon demons or angry ghosts.

There is indeed an invisible force behind the gliding planchette and it’s an unconscious, involuntary movement called the ideomotor effect. In motor behavior, there are two parts of brain activity. The first drives motor activity, while the second is the conscious registration of that activity. The ideomotor effect occurs when this registration is skipped, and while neurologists are uncertain of the mechanisms behind it, we know it exists for reasons we’ll address shortly. Instances of the effect were occurring as early as the Fourth Century when messages were divined in held pendulums, and the effect is also the force behind dowsing and facilitated communication.

In a Vox article, Aja Romano wrote, “Paradoxically, the less control you think you have, the more control your subconscious mind is actually exerting. The planchette makes it easier to subconsciously control your muscle movements, because it focuses and directs them even while you believe you aren’t in control of them. The appeal of the ideomotor effect is that you actually may be communicating with something you can’t typically access — your own subconscious — and that the experience can feel like communicating with something paranormal.”

Whenever participants are blindfolded, they are no longer able to produce discernible answers. This means that they were either in charge of the planchette all along or that the spirit is now speaking in its unknown language. In either case, the board is useless for deducing a message from another realm. In some of the experiments, the board is stealthily reversed when the subjects are blindfolded and the planchette is in invariably moved to where the letters had previously been.

Ouija boards were derived from Talking Boards, which assumed a variety of forms and were sold by those preying on the grieving following the Civil War. The boards were touted as a device to communicate with dead relatives and friends, and the various incarnations were consolidated into the Ouija Board and planchette, which were patented in 1890.

In a rare early 20th Century collaboration between Catholics and evangelicals, both condemned the device as demonic, and that reputation still largely holds in these communities.

Then there are those who believe in the board, but who think it’s excellent, not evil. For these types, ad hoc reasoning is used to dismiss the evidence that participants are providing the planchette power. When 1960s studies suggested that the ideomotor effect was behind it all, believers insisted the effect was a manifestation of ESP. And I found one guy online who explained the blindfolded problem by suggesting that the spirit must be able to see through the eyes of its conduits. These seem shaky rationalizations at best, but wanted to consult my go-to source on such matters and was told, “Reply hazy, try again.”