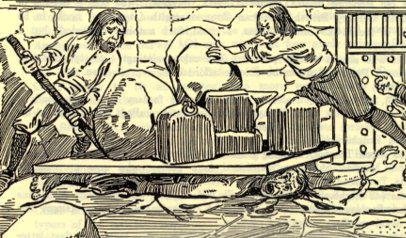 The world would be a worse place without color, light, and sound. But it would be better off without a therapy that uses these phenomena instead of medicine to treat disease and illness.

This describes vibrational therapy, which is a form of vitalism. This is the metaphysical belief that organisms possess an inner spirit that bestows the gift of life.

Vibrational therapy goes by many names, as different regions attempt to put their cultural spin on it, but is usually known as energy medicine in the United States. By whatever name, it is based on the assumption that health is determined by the flow or blocking of an unproven energy that runs through meridians, chakras, or reflex zones, none of which have been shown to exist. When the energy stops flowing, vibrational medics apply their crystallized Drano.

As energyandvibation.com tries to explain it, “All matter vibrates to a precise frequency and by using resonant vibration, balance of matter can be restored. Trauma and disease often results in states of either no movement or constant movement. Vibrational Energy Medicine therapies mirror trauma and disease to the system so that it can self-correct.” Light, color, sound, stones, crystals, and even geometry are all supposed methods for accessing and altering this vibration.

The field makes generous use of the appeal to tradition fallacy. The aforementioned website claims crystal medicine has its roots in dynastic Egypt and hints that Jesus used it too, though it fails to specify which gem helped him walk on water. If your incredulity meter has yet to peak, they also ponder that the field has its roots in Atlantis. However ancient or fictitious the place of its birth, this has no bearing on whether it works. And vitalism should have ended with the advent of Germ Theory, antibiotics, and vaccines. Sadly, the idea that our health is contingent on the manipulation of an imaginary energy traveling through undetectable portals remains. There are many who think that stones, crystals, tuning forks, crystal bowls, and infused water will aid in their wellbeing.

Seeming successes are due the fluctuating nature of illnesses, post hoc reasoning, and communal reinforcement. Failures are not considered such, but rather reasons to continue searching for the right frequency and proper gem/crystal/sound/light/color to treat the condition. Since the auras, chakras, and soul stars are only visible to the practitioner, you have to take their enlightened word. There is no equivalent of X-rays or blood pressure cuffs in this field.

Not only is no scientific instrument able to detect this energy, no practitioner has explained what type of energy it is, how it is accessed or controlled, and how it benefits the recipient. We are only assured that balance is met and the proper frequency is communicated, again without an explanation of what that means or why it matters.

Some proponents claim that each gem (or other conduit) has a specific healing property, which nature will lead you to, or more accurately to the New Age medic who sells it. Doing this enables them to do a nifty two-step around the notion of subjecting the claim to a double blind study. They can argue that each person responds differently, so the study would be invalid.

Dr. Steven Novella brilliantly noted that alternative medics use science like a drunk uses a lamppost: For support, not illumination. Accordingly, some vibrational medicine practitioners are fond of noting that the sun provides energy, which leads to a chemical reaction that coverts some of that energy to Vitamin D. This is true. But vibrational medicine further asserts that this change is caused by vibrations and therefore falls under their umbrella. There may be vibrations in the skin and photons during the process, but that’s incidental and is not the sources of the benefit.

Lisa Simpson bemoaned that a wealthy school’s periodic table had 250 elements while Springfield Elementary and the rest of us are stuck at 118. Even more shortchanged are vibrational medics, who lay claim to only four, none of which are actually elements. Again, from energyandvibation.com: “Our world is comprised four basic elements. These are air, earth, fire, and water. Understanding what each element represents helps us evaluate where our individual strengths and weaknesses are. Healers have found that focusing on the elements and the vibrational energies associated with each of them is helpful when determining treatments.”

Failing to understand what an element is would seemingly be enough to repel mainstream science, and overwhelmingly, it does. But most pseudosciences have at least one iconoclastic mainstream proponent who jumps on their alternative bandwagon. Jason Lisle wastes his astronomy doctorate promoting the Institute for Creation Research. After earning his Ph.D. in anthropology, Jeffrey Meldrum has spent 20 years chasing Bigfoot. Yale’s Dr. David Katz spends his time and his school’s money championing homeopathy.

For vibrational medicine, we have Dr. Richard Gerber. His possession of a legitimate medical degree fails to preclude him from making this pronouncement: “Only by viewing the body as a multi-dimensional energy system can we begin to approach how the soul manifests through molecular biology. That comes down to the whole issue of reincarnation and karma. There are various people doing past life regression work who are beginning to envision the soul’s progress through life, and illness as an expression of obstacles the soul is trying to overcome.”

Gerber offered no mechanism on how this is accomplished, so I was most interested in the energyandvibration section labeled, “How does vibrational energy medicine work?”

To avoid keeping you in suspense, I’ll tell you that the answer never comes. It begins by taking a swipe at mainstream medicine for treating the symptom but not the cause of an illness. This is a typical alt-med ploy and is incorrect. Beyond treating the symptom, a doctor will also consider the whole person when planning a treatment program by taking into account genetics, habits, and health history. Alt-med will vaguely claim to be treating the persons’ spirits and emotions, never explaining what this means, how they do it, or how it works.

In a second evasion of their own question, the website tells us, “Rather than treat the heart directly if there is a heart problem, a vibrational energy medicine practitioner will instead work with the energy systems of the heart.” I do appreciate the assurance that vibrational medics will not be conducting open heart surgery with amethyst crystals. Instead, they will “work with the heart chakra, the heart reflex zone on the feet or hands, the emotional layer of the energy field, and the air element in Polarity Therapy.”

The closest they ever come to trying to answer the question they raised is when they employ this piece of false equivalence: “When the C string of a harp is struck, all the C strings of all other harps nearby begin to vibrate. The C strings are in resonance with one another. The different parts of our physical, emotional, mental and spiritual being also resonate to various frequencies of vibration.” This is as mistaken as saying that harps, like humans, can benefit from a balanced diet.

At healingcrystals.com, I was given a crystal assessment and was advised to “Be open and honest during communications.” I’d like to think this post has accomplished that.