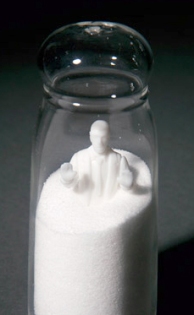 Halotherapy offers the chance to lounge in a cushy chair and wear a comfy robe while listening to soothing music, with it all taking place in ideal temperatures and conditions. I would like to report on this first hand, but the therapy takes place in a salt mine. I’m not inherently anti-salt mine, but the nearest one is much further away than my sectional, which would seem to offer the same relaxation and climate control advantages.

The reason for necessitating the salt mine is the alleged health benefits of breathing in such locales. Like most unproven therapies, the claims are all over the medical map. It is used mainly for respiratory issues, but proponents also tout its ability to slay depression, eczema, migraines, digestive issues, and dozens of other maladies.

Such inconsistency is almost always a pseudoscience giveaway. The mainstream medicine equivalent would be like a person with a herniated disc and another person with a malfunctioning gall bladder both expecting to be cured by the same podiatrist techniques. Double blind testing will, over time, show what works and what doesn’t. That’s how we know that anti-inflammatory drugs are successful against arthritis, while we have no reason to suspect arthritis would be impacted by salt mine sojourns, despite proponents making this very claim. Also unexplained is how much salt breathing is optimal or how it prompts the body to make the changes necessary to provide the alleged benefits.

It’s also a variety show amongst practitioners as to which salt is best. Some laud their salt’s purity, playing on the fallacy that pure is necessarily good. This is mistaken, as unadulterated mercury would be highly detrimental if consumed. And while probably not fatal, swallowing pure capsaicin would make one wish they were dead.

Meanwhile, others halotherapists stress the impurity of their product, highlighting the number of minerals they supplement their salt with, figuring that more has to be better.

Back to the purists, some of them insist that only Himalayan pink salt can achieve  maximum benefit because it is the most pure. The real appeal factor they’re going for, however, isn’t purity, but the idea of the salt coming from a mountain a long ways away. In Kathmandu, Himalayan salt is sold as just a seasoning, not as a cure all. And anyway, the salt actually comes from the far less exotic location of Pakistan’s Punjab region, and the mines are nearly 200 miles from the Himalayas.

Of course, mainstream medicine also features disagreements about the best treatment methods. Reasonable people can arrive at different conclusions, doctors are subject to human error, and science is forever questioning itself. But a doctor understands the mechanism behind the medicine and would know that penicillin works by interfering with the synthesis of complex molecules in bacterial cell walls. Salt therapists have no agreement on how their product would achieve any benefit.

About half of halotherapists maintain the salt is beneficial once it enters the patient’s lungs. The other half gets a little more complex, saying the caves produce negative ions that destroy bacteria. But according to Brian Dunning at Skeptoid, “An ionizer can help draw bacteria out of the air but it doesn’t hurt the bacteria. To kill bacteria, you need not negative ions, but ozone, which consists of three oxygen atoms.” And when the ozone is concentrated enough to kill bacteria, it may be deadly to the humans that house them. Thus, the only way to prove the efficiency of this treatment is to kill the patients.

Halotherapy sometimes takes place in manmade spas that employ machines which grind salt into fine particles, then dispatch it via the air. That has not caught on as much as treatment in a salt mine because persons who seek out this treatment are susceptible to the Naturalistic Fallacy.

For example, honeycolony.com greets us with a quick appeal to this fallacy on its home page. Without offering evidence for any of this, the website proclaims, “Standard iodized table salt has been chemically treated to such a degree that it no longer has any value for your body. You can find a number of natural salts, such as sea salt, at your natural food store, and Himalayan salt is considered to be the most nutrient-dense salt of all.”

As far as I can tell, there has been only one peer-reviewed paper on halotherapy, in the journal Allergy and Asthma Proceedings. It concluded salt therapy was an unproven treatment that lacked any support from double blind studies. Because the therapy resulted not from testing or development, practitioners cannot explain what it does, what mechanism it uses, or how it should be administered.

That leaves honeycolony.com to make the hackneyed and mistaken alt-med claim about detoxification, as well as employing the appeal to tradition fallacy by chiding skeptics who ignore the eastern Europeans who “have been using salt caves as therapy for hundreds of years.”

These Romanians, Moldovans, and Kosovars, by the way, are reporting relief from allergies, neurological disorders, rheumatism, and locomotor system dysfunctions. Honeycolony thus completes the alt-med quartet by emphasizing anonymous anecdotes over data.

I still want to conduct my own studies. I’ve got the furniture, clothing, music, and temperature, I just need to add some salt to the equation. French fires should to the trick.