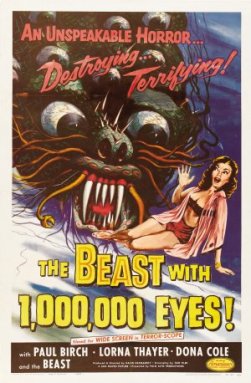 There are nearly 500 species of shark, most of which are harmless to humans, with obvious exceptions such as the hammerhead and great white.

According to Ryan Haput at Skeptoid, the fossil record reveals there was a much larger and more lethal shark millions of year ago, the megalodon, which likely could have devoured multiple great whites and hammerheads at once.

As part of its race against the History Channel to the bottom of the Stupid Pit, the Discovery Channel ruined one of its few remaining gems, Shark Week, by featuring a supposed documentary on a search for a living megalodon during the 2013 season. Like This is Spinal Tap, the mockumentary was hilarious. Unlike Spinal Tap, the producers were hoping to have it taken seriously. What is not funny is a network that started out as a science ally ended up producing faux documentaries they tried to pass off as authentic. They were busted when the supposed marine biologist leading the expedition was revealed to be actor Darron Meyer. The fact that they never found a living example did not keep them from naming the program, “Megalodon: The Monster Shark Lives.”

This was allegedly a giant monster hunt but was actually just a wild goose chase. What’s sad is that a TV program whose mission was tracking down unverified creatures would be a fascinating, entertaining way of bringing zoology to the masses. But to actually succeed, the scientists and producers would need to pursue insects or maybe small reptiles in a rain forest. Meanwhile, cryptozoologists and Discovery Channel executives prefer their secretive animals to have fangs, claws, and the ability to shred humans with ease. Minor point here, but the megalodon search is not precisely a cryptozoological undertaking, since the animal once swam our oceans. Promoters are not asserting a new species, but the existence of a living fossil.

According to Haput, giant triangular fossil teeth were discovered at least as early as the 17th Century, by Danish naturalist Nicolaus Steno. These are the largest shark teeth ever, up to seven inches long. Haput wrote, “Estimating the size of the shark…is difficult because the majority of the fossils found are isolated teeth or disarticulated vertebra, but it was likely between 50 and 70 feet and weighed up to 100 metric tons.” Most exciting to the Crypto Crowd, it had a bite that would produce 10 times the force of a Great White commoner.

Based on the evidence, paleontologists conclude that the megalodon was a large predatory coastal shark that went extinct 2.6 million years ago.

In the Discovery Channel shlock fest, staged footage shows a boat being attacked, with the passengers concluding the damage is inconsistent with encountering an angry whale. The next obvious step is hyperbolic post hoc reasoning, so enter marine biologist Collin Drake, who deduces that it must be a megalodon because a giant fin was captured in a photo of a German U-boat in these same waters during World War II.

I love the concept of chasing a giant aquatic best, but want it to be done in The Beast From 20,000 Fathoms or Attack of the Giant Leeches. I don’t want it in purported science documentaries.

This one featured sonar readings, beached whales, and an enormous amount of magical thinking that tied those elements into a giant prehistoric shark. In fact, the only piece of evidence presented was a Megalodon tooth allegedly found in 10,000-year-old sediment. But paleontologists who examined the find concluded it was an example of reworking. This is where a tooth erodes out of its original encasement and is re-preserved in newer rock.

Dr. Steven Novella has said that alternative medicine uses science the way a drunk uses a lamppost – for support, not illumination. Similarly, the Discovery Channel will gladly embrace genuine science if it furthers its goals, such as establishing that a 100-foot beast swims amongst us, ready to devour surfers, seals, and maybe even a blue whale. So the Channel identifies climate change as the reason the animal has swum from the depths of the sea back to the coast. In their explanation, warming oceans have forced the super beast back to his old chomping grounds.

Near the end of the program, team members deploy a life size whale decoy and 5,000 gallons of chum. A blurry, shaky image follows, during which the monster is tagged before diving more than 6,000 feet. Drake concludes, “I believe we just encountered megalodon,” cramming his version of the Scientific Method into one sentence.

As noted earlier, the biologist was later revealed to be an actor. No coincidence there, noted oceanographer David Kerstetter. “If even one credible scientist had doubts about this, the Discovery Channel wouldn’t have had to use actors,” he said. “But there is no discussion among fisheries professionals whether Megalodon is extinct.”

Indeed, no fossils indicate a megalodon in the last 2.5 million years. Haput noted, “This date coincides with the rise of our modern composition of whale diversity, including the gigantic filter feeders like the blue whale, which were smaller in general during the time of the megalodon. This is also around the time we start seeing orca in the fossil record, suggesting that there may have been intense competition driving the megalodon to extinction or that orca evolved shortly after the extinction of the shark to fill that niche in the ecosystem.”

In her takedown of the documentary, Discover Magazine’s Christie Wilcox wrote that the Channel could actually have made a worthwhile documentary about the megalodon: “They were incredible, fascinating sharks. There’s a ton of actual science about them that is well worth a two hour special.”

When the Discovery Channel was justifiably excoriated for trying to pass fiction off as fact, executives meekly noted it included a disclaimer about events being dramatized. This would justify recreating an actual moment, but the no “Dramatized Events” umbrella is so broad as to include completely fabricated events, fake newscasts being called real, or claiming an actor is a marine biologist. In doing so, the Discovery Channel created a whopper bigger than the one they were chasing.