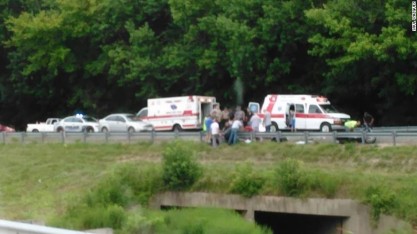 The photo above is from a fatal motorcycle crash last week and features a white, vaguely humanoid figure rising above the site. Some are claiming this image is of the man’s soul or of an angel. I even encountered one person speculating it was the demon who caused the wreck.

The idea of it being a soul escaping his dying body is contradicted by the fact that the victim died in the hospital, not on the highway. Some of the more creatively credulous have speculated that perhaps God lets spirits in such cases go to Heaven a little early so the person no longer suffers, and it only appears they are writhing, moaning, or crying. This, of course, is based on no evidence whatsoever, and is using an unprovable notion to justify another unprovable one.

Even if we go the angel or demon route, we have the sizable obstacle of none of the emergency workers or other witnesses on the scene reporting having seen this supernatural entity. It is only visible in the viral photo. The idea that spirts can be captured in an in-between world of video and photography dates to almost the advent of film. But if this really happened, we would be seeing regular instances of it. Yet no souls are seen leaving the body in videos of the Sept. 11 attacks. The extensive coverage of World War II battles features no departing spirits. The macabre compilations of suicides and other deaths on YouTube and other sites are likewise spirit-free.

Souls were once presented in Christian folklore as naked children, symbolizing an innocence that came with leaving a sinful body and world. Ghosts later became clothed adults, with chains for added effect. Today, they are most often detected in orb form since photo defects make the white circles more ubiquitous in photographs. This is especially true when the photo is taken at night or features a high contrast. The motorcycle victim, however, is a retro ghost since it somewhat resembles a body, though lacking extremities and facial features.

Proving either way whether the milky image is a soul is nearly impossible, so we will consider potential earthbound explanations. One suggestion is that the image is indeed the remnant of the deceased, as it is an out-of-focus bug that splattered on the windshield of the photo taker. However, that man, Saul Vazquez, said he took the photo out a side window, which he rolled down before snapping it. Indeed, for Vazquez to have taken the photo through his windshield, he would had to have been parked sideways on the shoulder. Besides, there’s no reason to disbelieve him when he says he rolled down the window.

So with a fauna explication not forthcoming, let’s consider a flora one. The image shows foliage emerging from the shade of trees in the area, so we may be seeing a tree trunk or light-colored branch. It could also be sunlight coming between the space between two trees.

But the most likely explanation is camera-related. Specifically, the image may be a dust spot that has affixed itself to the camera’s lens or internal sensor. This could cause a white or gray fuzzy appearance, such as what we see in the photo.

Also, the photographer had a large depth of field and the lens is stopped down to a smaller aperture. Investigating the picture, Snopes noted, “When the lens is stopped down and the aperture is significantly smaller, light rays coming from the lens diaphragm are perpendicular to the sensor filter. Because the angle is more or less straight, dust specks also cast direct and defined shadows on the sensor. That’s why dust shows up in images much smaller, darker, and with more defined edges at small apertures.”

Mix that with the photo being taken at a fatal crash site, then add a pinch of pareidolia, and the speck of dust takes on human spirit form. I’m anticipating a counterargument that this confirms Genesis 2:7: “Then God formed a man from the dust of the ground.”