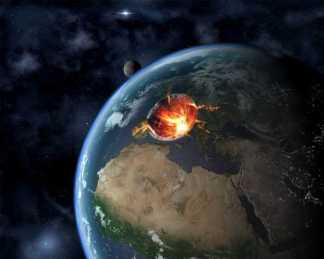 This month’s ushering in of the apocalypse took place on the Franco-Swiss border at the European Organization for Nuclear Research, better known as CERN. The focal points were clouds and lightning above the Large Haldon Collider particle beam smasher.

As portents of doom go, this one had a fair amount of specificity. We knew the date, June 24, the location, and who shot the photos: Joelle Rodrigue, Dean Gill, and Christophe Suarez. They are stunning photos, both for their subject matter and the quality of framing, light work, and depth. They were taken by either professionals or enthusiastic hobbyists.

While the colored clouds, twisting lightning, and refracted sunlight do look somewhat foreboding, other photographs have captured much more ominous skylines without an accompanying Armageddon announcement. In this case, it was a combination of clouds, lightning, and a vivid imagination which sparked the conspiracy theory that CERN is paving the way for demons or aliens to overtake Earth.

It’s not the first time CERN has been so accused. Theorists have noted that its logo proudly proclaims 666, though it more resembles 09D. There is also a statue of Shiva, the Hindu god of destruction in front of the CERN building. Connect those dots and add a few more of your own, and that cloud can become what rightsidenews.com called the “opening up of mysterious inter-dimensional portals that disrupt the fabric of space and time and expose Earth to the risk of alien or demon invasion from a parallel universe.”

Besides the location, the date was also a factor in this hyperbolic thinking. June 24 was when CERN began its Advanced Wakefield Experiment. Per the CERN website, this experiment is meant to be demonstrate “how protons can be used to generate wakefields and will also develop the necessary technologies for long-term, proton-driven plasma acceleration projects.”

As to how that plasma acceleration paves the way for invading demonic hordes and their Andromedan allies, we defer to prophecywatchnews.com. The website made the connection between a new CERN experiment and an old religious text, specifically Revelation chapter nine: “To him was given the key of the bottomless pit. And he opened the bottomless pit, and they had a kind over them, which is the angel of the bottomless pit, whose name is Apollyon.”

These clouds and lightning don’t really form a pit, as they are in the sky and not the ground, and the “had a kind over him” is nonsensical in this or any other context. But, hey, doomsdays are too infrequent to quibble over details.

Beyond Apollyon, a few other supernatural beings are in play. The website excitedly notes that a horned god named Cernunnos has a name that starts with C-e-r-n. So it deduces, “Is this just a coincidence? Is it also a coincidence that CERN has to go deep underground to do their god harnessing experiments? Cernunnos was the god of the underworld.” Since you asked, yes, it is just a coincidence. What is not a coincidence is that someone with a paranoid mindset would take the acronym for “Conseil Européen pour la Recherche Nucléaire” and note that it has 44 percent of the letters in an otherwise forgotten Celtic deity, and tie that to storm clouds over a particle accelerator intended to destroy the world.

Theorists also claim the site was once an Apollo temple, which worshippers felt was a gateway to the underworld. The portal is above, the underworld is below, once they find a lateral evil, they’ll have it all covered.

As mentioned earlier, Shiva loiters outside, which theorists like because he is the destroyer. However, that is but one of his almighty attributes. For Shiva is also a benefactor, giving him a complexity and ambiguity that makes for a more developed character in Hindu tales. If the statue is your evidence, one could argue that the benevolent side is what CERN is appealing to. Then there is my interpretation, which is that the good and bad balance each other, so the sculpture will have no impact on atom smashing or apocalypses.

Rightsidenews.com takes a somewhat evenhanded approach to the issue, though it seems a little more sympathetic to the credulous. It wrote, “Some people just see normal thunderstorms when they look at these clouds, but others are convinced that they are looking at inter-dimensional portals.” The key factor here is that we know what thunderstorms look like, interdimensional portals not so much. To be clear, I would probably be OK with elite physicists accessing interdimensional portals, but I need more than storm clouds above a particle accelerator to convince me it’s happening.

Unencumbered by this stuffy skepticism is the maintainer of freedomfighters.com. She writes, “CERN is notorious for opening portals and then denying it. The cloud looks to be rotating in a circular motion and some have claimed to see a face in the lightning-filled cloud. Last year we reported that there were clear images of demons in the pictures of CERNs beams. Could this be an outer manifestation of one?”

To keep church and doomsdays separate, we should consider that making out shapes in rotating clouds can easily have overtones free of demonic embodiment.