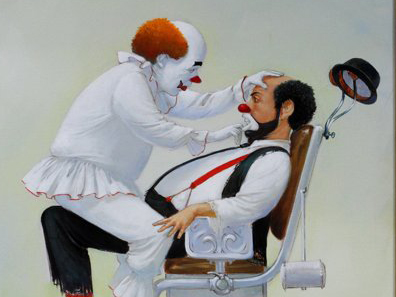 I’ve had my share of dental unpleasantries. There was the brutal wisdom tooth surgery that took seven times longer to recover from than what had been forecast. More recently, there has been a sustained inability to find decent dental insurance for my family. But Ben Goldacre notes that flaws in aircraft design do not prove the existence of magic carpets, and likewise, any dental care deficiencies are no point in favor of holistic dentistry.

Alternative approaches to dentistry are not as ubiquitous as in other medicines, but they do exist. Like other naturopathic remedies, the overarching idea is to find a way to help the body heal itself. Hence, the field purports to consider not just patients’ mouths, but also their bodies, mindsets, and spirituality. Put another way, chakra realignment and aura balances are said to impact gingivitis.

Naturaldentistry.us asks the difference between traditional and alternative dentistry, then provides this photo to symbolize this latter:

Indeed, that’s different than the poster of an anthropomorphic smiling tooth I’m used to seeing in most dental offices.

The Holistic Dental Network’s mission statement fits two logical fallacies into one sentence, appealing to both antiquity and nature: “Holistic dentistry encompasses…knowledge drawn from the world’s great traditions on natural healing.” It then defines the field as “an approach to dentistry that promotes health and wellness instead of the treatment of disease.” This insinuates that mainstream dentists are merely reactive, concerned only with fixing problems once they arise. Yet traditional dentists consider a patient’s oral health, history, and habits when planning treatment. They focus on prevention as well, for every trip to the dentist I’ve ever made has included free toothpaste, toothbrush, and floss. There were also pamphlets and posters focusing on how to avoid cavities and decay.

Alternative dentists are usually opposed to fluoride, even though the Centers For Disease Control and Prevention lists fluoridated water as one of the 10 greatest health achievements of the 20th Century. Most alternative dentists instead prefer the use of Vitamin D. Studies do suggest Vitamin D to be an effective strategy in combating decay, but this is no reason to halt fluoride use.

Some alternative dentists go so far as to proclaim the mouth to be the key to the health of the rest of the body. In this sense, it is the oral equivalent of chiropractic, reflexology, and craniosacral therapy. What is so strange about these disparate claims is that there never seems to be debate within the alternative medicine community over them. The mouth, spine, feet, and skull cannot all be the center of health, yet clinicians from the various alternative medicine branches never challenge each other when such claims are made. A chiropractor’s entire existence is based on the idea that all disease and illness emanate from the spine. Thus a claim that they all come instead from deficiencies in the mouth would, if true, render the entire chiropractic field useless. If a skeptic or mainstream doctor questions the central point of these alternative practices, the practitioners respond, but when fellow alt-med clinicians essentially say the same thing, no protests are raised.

Alternative dentistry may use some genuine science, but it also throws in various fluff based on the whims of the particular practitioner. This can include using herbs in lieu of toothpaste, or creating an oil concoction to combat periodontitis. If being serviced by Natural Dentistry in Gordon, Australia, these treatments will be administered in their “peace-inducing, Zen-like premises.” Meanwhile, lame mainstream dentists respond with an ambiance of Muzak and Goofus and Gallant comics.

Probably the most frequent claim in alternative dentistry is that mercury is one of the most toxic heavy metals; however, toxicity is determined by dosage, not element, and the amount of mercury absorbed from fillings is only a tiny percentage of what a person ingests through daily food intake.

Despite this, Natural Dentistry blames the mercury in amalgam fillings for “fatigue and lack of energy, poor short-term memory, poor concentration, anxiety, depression, and susceptibility to infections due to a depressed immune system.” Other alternative dentists blame amalgam fillings for goiter, heart trouble, tuberculosis, diabetes, anemia, high blood pressure, hardened arteries, rheumatism, neuritis, arthritis, kidney stones, leaky bladders, fever, constipation, weight problems, cataracts, and cancer. Attributing all these conditions to poor dental work is post hoc reasoning and is cast with a net so wide that it will snare most patients, especially seniors.

Alternative dentists frequently employ a mercury vapor analyzer to convince these patients they are in danger. The practitioner has the patient chew vigorously for 10 minutes, which will likely produce tiny amounts of mercury. The exposure lasts just a few seconds and most of the mercury will be exhaled, but the machines still give a false high reading.

This mercury poisoning and other dental ails will, depending on the practitioner, be treated with herbs, vitamins, essential oils, green tea extract, acupuncture, or body chemistry balancing. With regard to the last item, the International Academy of Biological Dentistry and Medicine’s mission statement reads: “We are committed to integrating body, mind, spirit, and mouth…and to relieving the body of infections, toxic chemicals and metals, electromagnetic disturbances and radiation, food allergens and nutritional deficiencies, biomechanical imbalances, and psycho-emotional distress and dysfunction, in order to restore natural biological function, mind-body vitality, and the ability to self-regulate and maintain homeostasis.”

However, Dr. Stephen Barrett at Quackwatch wrote, “The human body contains many chemicals, ranging from water and simple charged particles to complex organic molecules. Legitimate medical practitioners may refer to a specific chemical or a balance between a few chemicals that can be measured, but the idea that body chemistry goes in and out of balance is a quack concept.”

These treatments are often done under the umbrella of promoting wellness, which is an undefined term offering unspecified benefits. Hence, wellness can be advertised and sold without the customer getting anything in return. The patient may even be in ideal health to begin with.

Another nonexistent entity sold by some holistic dentists is cavitation therapy. This was most associated with Hal Huggins, who died two years ago. Huggins maintained that facial pain, heart disease, arthritis, multiple sclerosis, and leukemia were caused by cavitations, a byproduct of amalgam fillings which lurk somewhere in the jawbones. These cavitations are said to be undetectable by X-rays and are incapable of being treated with antibiotics. Only Higgins’ disciples, then, are capable of detecting and treating them. Per his website, finding them “requires lots of skill and years of experience.” A gullible patient is presumably another huge plus.