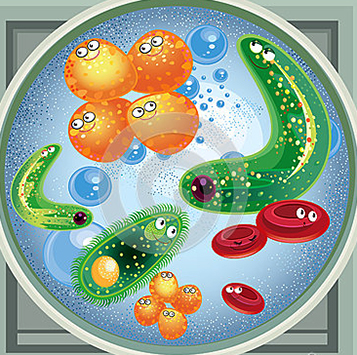 I regularly run across claims from the biology-challenged that evolution has never been observed. Yet it is on display every day in Richard Lenski’s ongoing E. coli experiment at Michigan State University.

Since 1988, Professor Lenski and his compatriots have charted genetic changes in 12 initially identical populations of asexual e. coli bacteria. The researchers have observed a wide array of genetic changes, occurring in anywhere from one to 12 of the populations. The population reached its 60,000th generation two years ago.

To deal with the cognitive dissonance of observed evolution, creationists fabricated a  distinction between micro- and macro-evolution. Since it would be straining credulity for even Ken Ham or Kent Hovind to deny what was literally being seen, they needed to come up with the ad hoc rationalization that these changes were merely improving an existing species, not creating a new one. They have yet to explain what would constitute a new species (breeding abilities, new appendages, just looking way different?)

But even if one accepts the term macroevolution, the Lenski experiment has now shown an example of this in its first stage. That’s because one of the e. coli cultures has evolved the ability to use citrate as a carbon source. Until then, the inability to do this was one of the traits that defined the e. coli species.

To be clear, neither Lenski, myself, nor anyone else claims this is a new species yet, as speciation is not a single event. It is a series of processes, with a beginning stage of initial divergence, a middle stage where species-specific characteristics refine, and an end where a new species becomes a separate evolutionary lineage. From there, it begins its own diversified branch or goes extinct.

Some creationists say that science doesn’t count if it contradicts their interpretation of a specific Bible version. As such, I’m unsure why they even try to answer scientific research with their own creative biology. Why not just limit their response to quoting Malachi this or Heznekeriah that? But since they do sometimes try to sound science-y, we will examine their attempt to finagle their way around Lenski’s observation of macroevolution.

Leading the creationist charge is Scott Minnich, who has genuine scientific credentials, as he works as a microbiology associate professor at the University of Idaho. More specific to this case, he had a critique of the citrate-using e. coli find published in the peer-reviewed Journal of Bacteriology. He and his associates replicated Lenski’s findings, so the disagreement was over what it meant. Minnich’s overarching point was that since the bacteria gained its new ability by rearranging existing genetic elements, no new genetic information evolved.

University of Toronto biochemistry professor Laurence Moran compared that to “saying a new book…contains no new information, because the text has the same old letters and words that are found in other books.”

Minnich argued that since genetic information was merely moved around as opposed to being created that this was not an example of macroevolution. Yet an e. coli strain gained an ability it had never had before, so this could be a necessary step toward speciation.

Also, the result allowed microbiologists to observe the ecological and genetic factors that cause change in organisms – changes that over time can lead to a new species. Contrast that with summarily dismissing the notion of speciation because Genesis suggests otherwise.

Moran further explained: “A genome encodes not just proteins and patterns of expression, but information about the environments where an organism’s ancestors have lived and how to survive and reproduce in those environments by having useful proteins and expressing them under appropriate conditions. So when natural selection favors bacteria whose genomes have mutations that enable them to grow on citrate, those mutations provide new and useful information to the bacteria.”

Moran’s words describe one example of how evolution works. Existing DNA is modified to create new genes or regulatory elements from existing sequences. Genes and functions don’t just poof and appear, much as creationists would love for them to.