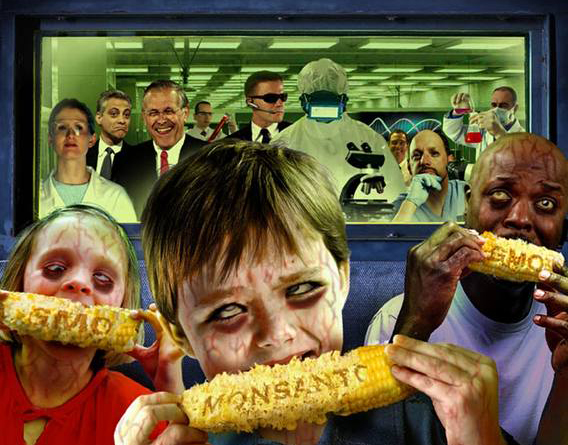 I strolled past the signs near the entrance proudly proclaiming that gluten-free food was available within. The store’s names stressed that the food was natural, leaving an unstated assumption that this was necessarily good. There was a detox section, although no one in it was receiving a liver transplant. There was also a sizable aromatherapy section and I was here for an anti-GMO presentation, so I figured I was deep in enemy territory. The organic dog food removed all doubt.

I was one of about a dozen attendees and presumably the only one doing undercover skeptic blogger work. I expected a one-sided presentation, but figured the speaker (a 67-year-old naturopath) would at least be aware of pro-GMO points in order to try and counter them. However, she had never heard of Golden Rice until I mentioned it. This is rice that is infused with Vitamin A, with a goal of preventing blindness in Third World children. Her retort was that Vitamin A should be distributed in other forms, without specifying this form, or how it would be paid for, transported, and delivered.

I thought we might have a chance at some evenhandedness when she described a GMO as “an organism which has been altered.” Anti-GMO types frequently prefer phrases like “manipulated into an unnatural state.” However, that hope vanished when she told us, “In the original Omen series, the antichrist was the CEO of a company thinly veiled on Monsanto. That is fitting, and they knew something.”

She touched on foreign policy as well. “Russia has totally banned GMO foods. They won’t have to launch a war, they will just be able to walk in and take our country because people here will just be zombies from eating that stuff.” I know the undead has been a saturated pop culture topic lately, but burned-out Commies vs. capitalist zombies, I think we’ve got a ratings winner there.

By the end she was explaining “how to avoid these Frankenfoods.” She also regretted that GMO opposition in the United States hasn’t mirrored what has happened in France, where she says the citizenry has ripped up cobblestones and dumped farm animal excrement in the streets. Indeed, the drive home was the one part of my seminar attendance that was without bullshit.

The Omen and Frankenfood references nicely mirrored the naturopath’s own horror tales. These included how 70 percent of U.S. foods are genetically modified and that these products cause liver malfunction and heart failure. And we are washing these GM foods down with aspartame-riddled drinks, which causes Multiple Sclerosis, Alzheimer’s, and Parkinson’s. Yet we were somehow all alive and spry enough to be hearing this. The other attendees presumably douse themselves in patchouli oil before heading out to buy organic pears and honey lemon shampoo, but that wouldn’t explain why I’m still healthy.

There was frequent praise of organic produce. “Does it cost a little more? Up front, yeah. But do you know how much it costs to be in a nursing home’s Alzheimer’s unit?” This was asked without offering evidence that this is the inevitable destination for the GMO corn-fed amongst us. It also glossed over the fact that Alzheimer’s substantially predates the appearance of GMOs .

She repeated the usual ad populum associated with anti-GMO talk. She pointed out that 26 nations have banned GMOs, with “Europe” being one of the countries she listed. In truth, most of the countries she cited only ban portions of the GMO process. I was unable to get a definite picture, but I could only verify that Zambia and Zimbabwe have truly banned GMOs, meaning they outlaw their cultivation, import, and sale.

In any case, the number of countries that have banned it has nothing to do with whether they are safe. Governments can and do pass bad laws based on bad information.

She described GMOs as “Round Up Ready,” which is only true occasionally. Most Round Up ready crops are GMOs, but not all GMOs are Round Up Ready. She used this introduce the idea that glysophate is a danger. Indeed, it can be, but like all chemicals, toxicity is determined by dosage.

I raised this point, asking, “Since the dose makes the poison, what is a safe amount of glysophate? For instance, if you had two acres, how much glysophate could safely be spread?” She answered, “There’s no safe level of glysophate, just none.” I decided to fact check this and came across the National Pesticide Information Center at Oregon State University. Its information about glysophate shows potential danger in certain conditions and doses, but it is far from the death sentence our neighborhood naturopath had guaranteed.

We were shown photos of severely bloated rats that supposedly had been fed GM soy. I’ll give the benefit of the doubt and assume that these rats were bloated for this reason. But if so, the studies test for such dangers, and when proven unsafe, the food is not allowed to be sold.

She made no mention of the 1,783 studies that indicate GMO safety, other than to say such studies are pushed through by wickedly wealthy Monsanto executives and a compliant government. Not all studies are industry-funded, though many are, and with good reason. Most automobile safety tests are funded by the industry, in part because they are liable if they sell a defective product. The same is true with those who sell genetically modified organisms.

Next, the naturopath offered, again without evidence, that industry and government elites “who push all this junk on us, you better believe they’re eating high-quality organic food.”

Between what she said and audience members chimed in with, here were some other memorable quotes from the day:

BEST POST HOC REASONING: “I have a friend whose adult daughter was struggling with infertility. She asked what she could do, and I said, ‘Get her off soy and tell her to eat organic.’ Now she’s pregnant with her second child.”

BEST POLITICAL BIPARTISANSHIP: “It doesn’t matter if it’s Republicans or Democrats. GMO stuff is Obama, and aspartame was Bush and Rumsfeld.”

BEST GRAMPA SIMPSON IMPERSONATION: “These people that are 20 and 30 years younger than I am are idiots and zombies, out there eating all this stuff. It effects the way you think, the way you reason, and your reaction time. In places where they don’t have GMOs, people are bright, they’re engaged, they’re energetic.” Or in the case of Zimbabweans, they are starving because President Mugabe won’t accept GM corn for drought victims.

As mentioned earlier, the only countries I could determine that have banned the cultivation, import, and sale of GMOs are Zimbabwe and Zambia. So unless the naturopath is vacationing exclusively in the Victoria Falls vicinity, at least some of the peoples she’s encountering on her travels are consuming GMOs. Attributing all pleasant character traits to a GMO-free diet, and all negatives traits to consuming GMOs, was part of the presentation’s continual post hoc reasoning.

BEST OMINOUS, HUSHED, REPEATED USE OF THE WORD “THEY”: “They created the Zika disaster and then they say we’ve got a vaccine to treat it. They do that again and again.”

BEST REFERENCE WITH WORLD WAR I OVERTONES: “It’s mustard gas when you take a shower because the chlorine heats up the water and turns the water into it.”

The naturopath closed with what she said was a true tale about a Greek nun.

“She never kept more than a day’s supply of food. She ate what anyone offered her and she never got sick. Then she had a girl who came to stay with her who tried the same approach, and she got deathly sick the first day. The difference was that before the nun ate anything, she prayed over it, and the young girl didn’t.”

It seems, then, that the naturopath and her kind can dump their anti-GMO food campaign in exchange for praying before consuming it. I can live with that compromise.