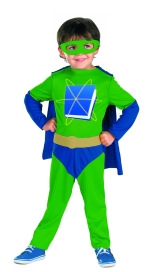 Indigo children are said to be youngsters who possess highly desirable supernatural abilities. These awesome offspring are variously suspected to be multidimensional beings, human-alien hybrids, super-evolved hominids, or prophets destined to lead humanity to full enlightenment. While none of these distinctions have been confirmed in indigo children, we can be certain of their parents’ traits, most notably a massive ego.

The concept of indigo children originated with Nancy Ann Tappe, who attributed her discovery to her synesthesia. This is an neurological phenomenon where a person is using one sense but has another stimulated. Everyone does this to some extent. For instance, if someone hears the word giraffe, they likely will “see” this giant animal in their mind. But synesthesia primarily refers to such experiences as hearing a car start and associating it with the color green, or looking at a circle and getting an itching sensation. Tappe, then, attributed synesthesia to her seeing an indigo glow around select children.

A fairly minor point here, but that would not be synesthesia since only sight was involved. Perhaps she was claiming the color was her “seeing” the sixth sense. In any case, whether or not she is seeing shimmering children would be easy to determine. A dozen partitions could be set up, and behind each would sit either a person she considers indigo, a person she does not consider indigo, or an empty chair. She could then tell testers which partitions had an indigo glow rising from them. However, New Agers don’t normally care for these types of tests, instead preferring feelings, intuition, and client gullibility. Boyued by these elements, Tappe writes books on the subject and holds seminars, where hundreds of disciples bathe in each other’s bluish brilliance.

In her writings, Tappe lists traits to look for to know if your child is indigo. It’s unclear why this is needed, since having Tappe look at the kids would seem enough. Also, the list of indigo traits is so long and vague it could apply to everyone and so the Forer Effect comes into play. These descriptions include being curious, headstrong, unusual, driven, intuitive, intelligent, and resistant to structure.

Thinking one’s child is a hyper-evolved multidimensional being is attractive to those whose credulity is matched by their vanity. But author Sarah Whedon suggests the indigo label also appeals to parents who seek to excuse their child’s behavior and their parental responsibility to do anything about it. For instance, pro-indigo authors Jan Tober and Lee Carroll say such children may function poorly in conventional schools due to their rejection of rigid authority, their being smarter than their teachers, and their inability to embrace discipline.

Whedon suspects that many children who have ADHD or autism are instead labeled as indigo by their parents. This also gives a fabricated reason to avoid Ritalin or other medication, a plus in this mostly anti-vax, anti-Big Pharma community. Here, autism is just another word for telepathy. Skeptic author Robert Todd Carroll said, “It’s much easier for them to believe their children are special and chosen for some high mission instead of having a brain disorder.” Anthropologist Beth Singler considers the movement as part of a moral panic about children, parenting, ADHD, autism, Big Pharma, and vaccinations.

From a list of identifiers at indigochildren.com, we learn, “If this seems to describe you, chances are you are an Indigo,” followed by an exhaustive list of personality traits. Most are positive, such as creative, honest, sympathetic, and confident. Like astrology, it is kept general, while also telling the listener what it wants to hear. There are handful of negative traits thrown in – rebellious, antisocial, strange – in order to have cover for ADHD and autism.

I doubt if anyone who has wanted to know if their child was indigo has looked into it and decided the answer was no. If someone has gotten to the point of seriously asking that question, it reveals their motivation and mindset.