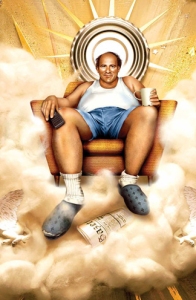 This fall, we had something a little different in skeptic news. It was nice to see something besides the usual essential oils, chemtrails, and clairvoyance. Specifically, there was a video that appeared to show skyscrapers floating on clouds above Foshan, China.

Attempting a scientific explanation, some suggested it was a fata morgana, a mirage that can distort the appearance of distant objects, and is the likely reason for ghost ships spotted by 17th Century sailors. According to Wired science writer Matt Simon, when the sun heats up the atmosphere, it can create a gradient of temperatures. The air near the surface is cooler than the layers of air higher up. So when light hits a boundary between two layers that are different temperatures (and therefore different densities), the light refracts. Transitioning from Simon’s scientific explanation to my unscientific one, this screws with the viewers’ eyes and makes them think objects are higher than they actually are.

However, skeptic blogger Mick West notes that a fata morgana creates only a thin illusion close to the horizon. It also appears small and in the distance. None of these are consistent with the video of skyscrapers on a cloud.

Seeking another scientific explanation, some observers noted that, under specific conditions, clouds can isolate and obscure the foreground. This means that that tall objects, such as city buildings, can appear to be floating on those clouds. This is what happened in Huangshan City, China, in 2011. Mist arose from the flooded Xin’an River and made it appear the buildings downstream were floating above it.

But in the Foshan case, no mist is involved. There is just a fairly clear shot of buildings floating on a cloud. I anticipated hearing explanations centering on alien architecture, a government sanctuary city for an impending nuclear war, or a crack in space-time continuum that allowed us to briefly view another universe (albeit one that looks boringly like ours).

However, if any such ideas were voiced, they were shouted down by those blaming it on Project Blue Beam, the Illuminati’s space warfare division. The most popular conspiracy theorist guess is that NASA, as part of the New World Order, is creating a hologram of invading aliens or the second coming of Christ. The reasons given for doing this are typical of the ill-defined but nefarious purposes that the Illuminati is said to be doing anything. The floating city was intended to be a test to see if the hologram generator is ready. Indeed, what better way to keep an above Top Secret plot quiet than to have it include a spooky image that appears in broad daylight over a metropolitan area? It was never explained how NASA had gained permission to use Chinese airspace, although the default conspiracy theorist position would be that China is part of the plot, as am I for questioning this premise. Also never addressed was the flaw of hoping to gain control over a population by having Jesus return to a country that is three percent Christian.

While the video seems to lack a reasonable explanation, the fact that there is only one image would suggest it was fabricated. The idea that no one else would grab their cell phone and take a shot of a floating city seems unlikely. Also, it attracted attention only after the video was made, as there are no other reports of anyone noticing it at the time it was allegedly overhead.

But this is speculation. I like wrapping my posts up in nice, orderly, scientific bows, and I cannot do that in this case. I can only write, “I don’t know, let’s find out.” Although in this case, it’s more like, “I don’t know, that was kind of interesting, let’s go to Taco Bell.”

Both of those declarations indicate an ambiguity that is nowhere to be found by those on the other side. For example, YouTube poster Gaia declared the sky city to be, “Even more evidence of multinational shadow government megalomaniacs spending trillions of taxpayer dollars in order to further mess with our heads and push a few more million people onto psychotic drugs, dumbing down or killing us.”

Sounds like the dumbing down is proceeding as scheduled.