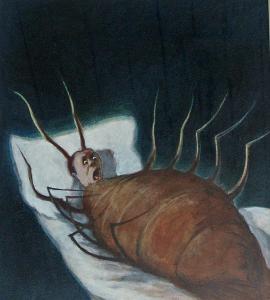 We all feel bugged now and then, but no one has it worse than those with Morgellons syndrome. This is a psychotic condition in which people think their skin is infested with disease-carrying parasites or similar nastiness. For maximum effect, this condition is sometimes attributed to chemtrails. The victim may experience sensations of biting, stinging, or itching, or have seemingly unexplained lesions.

A CDC multi-year study concluded there were no disease organisms present in supposed Morgellons sufferers. The study consisted of skin biopsies and blood tests of more than 100 people said to be afflicted, and revealed no evidence of an infection or common environmental factor among the subjects.

In another era, this would have been the end of it. The Dallas Observer noted a “long line of weird diseases that have swept through populations, only to disappear without a trace once public concern subsides.” But with the Internet, there is no subsiding. Here, persons can find communal reinforcement for their suffering and search for cures, and possibly present the CDC report as part of a government cover-up.

This problem can be exacerbated by false balance in the media. If the topic is a minimum wage increase or whether our military should intervene in Lower Eastern Craznovia, a good journalist will present all sides of the issue and let each source give his or her opinion. But with science and medicine, opinion is of no value. A person could think gravity is a hoax or that Sirhan Sirhan was framed, but a journalist doing a documentary on high jumpers or the RKF assassination would be under no obligation to present these silly sides to the stories.

But in cases like Morgellons, reporters feel it necessary to let everyone have a turn. So one side says, “No biological agent has ever been shown to be consistent with this supposed malady,” or “No biopsy has ever identified a pathological agent.” The other side counters with “My skin is crawling and itching, this is real,” and scores of similar anecdotes.

Now, this is a real condition, as it is a form of delusional parasitosis. As such, it can best by treated with antipsychotics, which many sufferers will shun because they don’t think that’s addressing the problem. The notion that they don’t have a physical condition makes them more deluded and desperate.

With no mainstream doctors to turn to, sufferers may do their own diagnosis, inspection, and treatment. In doing so, they sometimes claw at the phantom parasites, causing lesions to form, with these being considered an advanced stage of the disease. So the rapid scratching is accelerated and the sore made still worse. Many turn to alternative remedies. All will be ineffective, but they can range from as innocuous as crystals, sage, and reflexology to as dangerous as bleach treatment, equine medicine, and industrial insecticides.

Unlike much of pseudomedical lore, this phenomenon has a known starting point. In 2002, Mary Leito claimed her son demonstrated the symptoms of a disease described by Sir Robert Browne in 1690. This story was passed around the web and the hysteria began.

It is good to identify previously-undiscovered diseases and start seeking treatments. But this needs to start with a working definition of the disease and involve corroborating with other medical and science professionals. It should not start with a definitive declaration by an amateur and spread unchallenged online. That really bugs me.