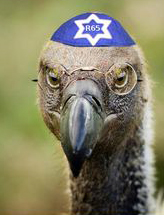 The Book of Revelation features vivid imagery of sea dragons, winged lions, and scorpions with human heads (or possibly humans with scorpion bodies). But some modern-day interpretations also include a much more mundane creature, the vulture.

On the website of Paw Creek Ministries, Joseph Chambers lays out the relevance this despised bird has to cataclysmic end times. Chambers begins by interpreting Armageddon to be in Israel’s Mediggo Valley. This seems a fair enough conclusion. Every action in the Bible and Koran took place in either modern-day Israel, southern Turkey, eastern Egypt, northern Saudi Arabia, or western Iraq. Hence, almighty God’s omnipotence seems limited to a small circle of the Middle East.

After dispatching with cookie cutter references to the Antichrist and the tribulation, Chambers gets to the heart of the apocalyptic matter: “The hatred for Israel that fills the Middle East and much of the world is a prophetic fulfillment. It could not be otherwise or we could not be living in the end times.”

Critical thinkers may note the affirming the consequent committed here. For any new readers, this is when one: 1. Makes a conditional statement; 2. Affirms the consequent; 3. And conclude this proves the antecedent to be true. In this instance, Chambers notes that it is prophesied Israel will be hated, and since some people hate Israel, this proves the Bible is true. Chambers did not cite which verse predicted this, and I could find no verse that made the claim. But even if there is such a verse, there could be reasons persons would dislike the Israeli government that would have nothing to do with God foreshadowing it. Its treatment of Palestinians or its civil rights abuses could be an issue. Or it could be plain old anti-Semitism, which has existed as long as there have been Jews. Anti-Semitism was in existence at the time Biblical prophecies were written, so predicting that it would continue is an underwhelming prognostication.

Getting back to the blood and gore, Chambers writes that Armageddon will be the greatest battle in history, not just fought by men, but featuring angels, demons, dragons, griffons, and Sleestak. What a mess it will be.

“The clean-up from such a slaughter cannot be accomplished by human hands,” Chambers writes. “Vultures will be called by their creator to descend en masse and devour the rotten flesh,” which will be peeling off 200 million victims, although he never explains how he reached this figure.

At any rate, an avian army will descend, according to Revelation 19:17-18: “An angel cried with a loud voice, saying to all the fowls that fly in the midst of heaven, come and gather yourselves together unto the supper of the great God, that ye may eat the flesh of kings.” All this explains why the number of vultures in Israel is substantially rising, Chambers adds.

Also showing an interest in Israeli scavenger birds is cuttingedge.org. This site is similar to Paw Creek Ministries, but with more interest in the New World Order and exclamation points. It tells us, “The Jews of Israel are showing great concern for vultures, to the point where the population is increasing dramatically!”

The site then segues into Israel’s standing in the world. “Israel has fought five major wars, most of them against considerable odds. Israel today numbers 6.6 million citizens living amidst 300 million Arabs who universally want to kill her once and for all and throw her out of the Middle East. That tiny Israel can withstand this kind of opposition is proof positive of the omnipotent power of almighty God. God defends tiny Israel against overwhelming foes.”

Another critical thinking interjection here. This is one more example of affirming the consequent. The writer is saying, “If a small nation can survive despite being surrounded by hostile enemies, it is because it has godly protection. Israel survives despite being surrounded by hostile enemies. Therefore, God is protecting it.”

However, there can be other factors. God, for instance, is providing $9 million less a day to Israel than the United States is. Neighboring countries may also may be hesitant to provoke a nation strongly suspected of having nuclear arms. Those countries are also aware that Israel’s Begin Doctrine calls for preventive strikes if an enemy attempts to possess weapons of mass destruction. Israel employed this in 1981 when it bombed an Iraqi nuclear reactor under construction, an attack that would be superfluous if God was offering absolute protection.

Cuttingedge.org then quotes the other biblical book known for its vivid imagery, Ezekiel. It claims 39:17-18 is referring to Armageddon’s aftermath: “Say to the birds of prey of every sort and to every beast of the field, assemble yourselves and come, gather from every side to the sacrificial feast that I am preparing for you, even a great sacrificial feast on the mountains of Israel.”

It then explains, “‘Gather yourselves to my sacrifice’ alludes to an invitation common in the Middle East to invite friends over for a specially prepared feast. God is celebrating a victory over the enemies of Israel!” Come one, come all, for free food, drink, and a celebration of genocide!

The author also concludes that the prophesied destruction of the House of Esau refers to Palestinians, and he excitedly notes their impending slaughter. And the vulture increase in Israel is a complementary miracle since something has to eat the flesh of the displaced people and pluck their heathen eyes.

I usually find websites that specialize in prophecy fulfillment or conspiracy theories to be selective in their facts and interpretations. I don’t know that I’ve ever come across any that were just so wrong as these two. For vulture populations in the Armageddon vicinity are actually plummeting dangerously low.

Jon Gerrish runs the Jerusalem Cornerstone website and he is one Christian who takes a jaded view of imminent doomsday pronouncements. With regard to the ornithological implications, he writes, “After my arrival in Jerusalem in the fall of 1982, I was introduced to articles and newsletters regarding Israel and the End Times. One had to do with a sudden and dramatic increase in vulture populations across the country, especially in the Jezreel Valley, where Megiddo is located. Since then I have become more familiar with Israel’s flora and fauna. It is well documented that Israel’s current population of vultures has unfortunately diminished to the brink of extinction. Only 40 pairs of griffon vultures are left, when there were 1,000 in 1948.

Meanwhile, the Al-monitor newspaper reports that vultures native to Israel are in danger of extinction. About 150 years ago, Briton Henry Tristram documented thousands of vultures in modern-day Israel. A survey taken in 2000 counted just 400 of them. That means these 400 birds would have to finish off 200 million victims, quite a miracle indeed. But 5,000 people were fed with a few fish, so maybe this idea just needs to be inverted.