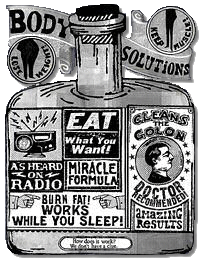 Scott Adams wrote that he once planned to pen an investment book for newlyweds, but scrapped the idea when he realized he could fit everything onto one page. With proper Dilbert reverence, I present my similar treatise for healthy living:

Number eight cancels out if your friend is also your doctor.

I would stack that list up against most nutrition and health advice I come across. But like Adams’ shelved financial work, nobody would buy mine, and not just because it’s terse. It doesn’t offer anything groundbreaking or trumpet a claim of uniqueness. There are no hidden secrets, no purported scientific breakthrough, or no long-lost knowledge. These are the elements that drive modern health fads.

One of the current buzzwords, natural, thrives on circular reasoning: Natural foods are good because they come from nature. This movement usually criticizes processed foods, chemicals, and toxins, without defining any of these. When it’s pointed out that all foods have chemicals, the mantra might be changed to synthetic chemicals, without explaining why these would be unhealthy. Also overlooked is that today’s food is not natural, but rather the result of artificial selection developed to make it longer-lasting, more pest-resistant, and more nutritious.

In order to sell their products, decidedly unscientific types like the Food Babe and Dr. Oz need to generate food fear. A frequent tactic is to employ the faulty logic that if a chemical is dangerous in one context, it’s dangerous in all. This fallacy is perhaps best demonstrated by the components of table salt.

Of course, even this innocuous compound can be made to sound dangerous by employing the right verbiage. It was at the center of one of the heavier concentrations of buzzwords I’ve ever seen, on spiritdetox.com:

“Just as an illusionist does, table salt pulls off a first-rate impression of NATURALLY occurring salts. It’s not very comforting to learn that the taste of PROCESSED salts stem from the manufacturing of 97.5% sodium chloride and an assortment of CHEMICALS.”

Ignoring the concept of chemical change, the salty talk continues: “Sourced from crude oil extract – yes, leftover oil flakes – table salt is created through iodization. Table salt is unhealthy, and it can be downright TOXIC to your body! A few symptoms particular to PROCESSED salts are…,” followed by a listing of every malady known to man.

Continuing: “Choose to pass the traditional saltshaker, and head for a NATURAL salt. HIMALAYAN salt is still the reigning champion of NATURAL salts.” The more exotic the land and the farther away these products come from, the better. Finally, we learn that the solution is for sell on this website. “To order spirit detox Himalayan organic salt, call 1-800-… ” Spirt, detox, Himalayan, organic, and natural! We’ve arrived at Pure Bliss Junction.

Some put a religious spin on the natural food movement and insist we should only eat food that God provided. Ask Eve how that worked out. The idea of paradise goes beyond Eden, and is found in Greek culture and in tales of various indigenous tribes. The modern incarnation is Paleo Man, whose diet got humans fine-tuned to the optimum evolutionary state, which we are now ruining. Depending on how extreme one takes these ideas, the dieter may even avoid cooking, as raw foodists do. They claim that cooking removes food from its natural state. With some foods, their natural state is underground, but raw foodists still pull them out. It’s true that cooking can zap nutrients, but it can also bring them out, depending on the food, and it also kills bacteria.

Another common food fad tactic is piggybacking on a diet that is legitimate for a few persons with a specific condition. For instance, those suffering from Celiac disease were advised to avoid gluten. Since this avoidance is necessary for someone’s good health, it was advertised as good for all.

We also frequently see the post hoc ergo propter hoc reasoning, of “A, then B. Therefore A caused B.” For instance, “Since we started wrapping our 12-year-old son in seaweed, he’s been more focused.”

People are always going to want to lose weight, so diets will continue to proliferate. So here I offer Volume II of my health series: Eat nutrient-dense, low calorie, satiating foods, maintaining a balance of fruits, carbohydrates, and lean protein. Exercise regularly. The end.

My diet plan has plenty of competition. For starters, there is the vegan diet, which is sometimes undertaken based on personal morals. If done for this reason, be advised that it doesn’t eliminate the demise of animals in food production. Bugs and mice are killed when soil for tomatoes is tilled, and raccoons are squashed by trucks that deliver them. If it’s done for health reasons, it’s obviously good to increase fruit and vegetable intake, but it can be tough to get enough protein, though beans and peanut butter help.

Then we have the blood-type diet, developed by someone calling himself a “naturopathic physician,” a seeming oxymoron. He claims whatever food a person eats react chemically to his or her blood type. This is without scientific merit, but the author gets credit for originality, which is necessary if you’re going to get someone to swallow it along with their diet food.

There are dozens of very low calorie diets that would cause one to lose weight, but are very hard to stick with and the weight almost always comes back. The Werewolf Diet uses the full moon (or new moon) as a guide to fast on those days and eat very little on other days. There’s no logic behind tying it to the moon, and not even as easy to remember as fasting on dates that end in 1.

There are also cookie diets. These are not centered on nice soft, chocolate chip cookies, but on high-protein, high-fiber hunks of cardboard forced down twice a day, followed by a low-calorie dinner. With the Five-Bite Diet, one skips breakfast, then eats five bites of anything twice a day. One would certainly lose weight, but sacrifice all kinds of nutrients, especially depending on what food one chose. I would go with Peeps because their supple nature would allow me to cram more in. Other very low calorie diets are based on cabbage, lemonade, baby food, or grapefruit, always accompanied by a claim that a particular food works best. Side effects of very low calorie diets include fatigue, nausea, dizziness, and dehydration. Plus, dieters lose muscle, not the weight they want to take off. Short-term diets like these are unlikely to yield long-term results.

I will close with Volume III, Vaccinations. Get them.