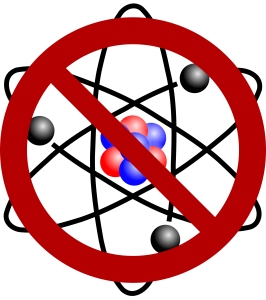 I once had an idiosyncratic anti-science stance. Owing to youthful indiscretion, I found the subject boring and took the minimum amount possible in both college and high school. I later realized my error and did what I could to mitigate the damage, subscribing to Discover, watching intellectual television when that existed, and grabbing some books. The plus of picking up Cliff’s Notes on Chemistry is that it is a $9 science education. The drawback is that it is a $9 science education. I was trying to teach myself the topic, meaning my chemistry professor was Wayne Marlow, a tough obstacle indeed.

I’m still at it, squeezing in science reading when I can, which isn’t much with five children. At the same time, I explain science principles to them and tell them they will learn more about this in future school years. I also watch YouTube tutorials and have all Cosmos episodes on DVR.

Taking so little science is my greatest regret, but at least my anti-science stance was because I thought it was boring, not because I was denying its truths. Today’s anti-science army does just that, ironically aided by the Internet, cell phones, and iPads. Long gone are the days when universities and laboratories could serve as guardians of the world’s scientific knowledge.

What follows is a list of 10 of the worst anti-science ideas. For space reasons, these are presented in Genetically Modified nutshells. Most of the subjects I’ve dealt with at length in other posts, but the focus here is on consolidating them to show the anti-science motif that runs through some of society. The list is in ascending order of negative impact on the country.

10. EARTH IS FLAT. This idea is silly, but the issue is serious. It demonstrates just how impervious to facts and logical arguments some people can be. While Flat Earthers are less than .1 percent of the country, ideas later in the list are just as scientifically flawed, but embraced by 30 to 50 percent of the population and Congress, and these persons attempt to influence policy.

The only incidental positive to the Flat Earth position is that it forces one to build thinking, deduction, and persuasion skills when explaining why the idea is wrong.

So somewhat sheepishly, I present evidence for a round Earth: We see the top of vehicles first when they come over a hill. The farther one travels from the equator, the farther the stars go toward the horizon. The higher up you are in your treehouse, the more you can see the approaching enemy. And the best proof: During a lunar eclipse, a round shadow is cast on the moon.

9. GEOCENTRISM. This bunch thinks the sun, planets, and stars revolve around Earth. Like their Flat Earth brethren, modern-day geocentrists are maddening to someone concerned about science education. But it also forces us to logically explain to, say, our 7-year-old son, how we know heliocentrism is true.

Even at warp speed, Neptune would be unable to complete a rotation of Earth in 24 hours. Second, the apparent positions of the stars changes between January and June, the result of Earth moving around the sun. Also, when rain falls without wind, it comes down vertically. But jump in your car and the rain seems to come at an angle. Similarly, as Earth moves around the sun, the light appears to fall from a slight angle. This would not happen in a geocentric world.

While almost exclusively the domain of a tiny subset of Catholics, I found one geocentrist online who purported to make a scientific case for it. The site was littered with pseudoscience red flags, the most glaring being that he took his ideas straight to a sympathetic audience rather than a peer-reviewed journal. Similarly, he worked in isolation, not with scientists. While he did maintain a forum, he was hostile to sound scientific responses and inquires, whereas a genuine researcher would welcome the dialogue. Another red flag was that he started with his conclusion, then sought confirming evidence. He also employed flawed methods with irreplicable results, another giveaway.

8. MOON LANDING HOAX. This is slightly more in the conspiracy theory mindset, though it includes a massive heaping of scientific ignorance. It centers on misunderstanding of the Van Allen belt, why no stars would be visible, and a flag allegedly waving with no atmosphere. It’s OK to raise questions like these. When I first heard these objections, I entertained them and sought out further evidence. I was satisfied with the thorough scientific explanations given. But for those determined to deny it, these answers were further evidence of a cover-up.

7. GMO EVIL. This is based on little more than fear, highly-selective quote mining, and treating correlation and causation as identical twins. Genetic modification is merely the splicing of genes and inserting of DNA from one species into another, resulting in better food. There are safety controls in place and any danger, if there ever is any, would be to a specific engineered food, not to the entire concept.

Despite the appeal to nature that many anti-GMO activists claim, agriculture has advanced through the use of artificial selection. Nature’s food was mostly atrocious, but has been made delicious and nutritious through agricultural advances.

6. POLYGRAPH USE. These machines accurately record physiological data, but cannot determine if the subject if prevaricating. Police can request a suspect use them, but a guilty sociopath will pass, while someone nervous and innocent might fail.

Another problem is that subject is asked a series of simple questions to establish a baseline before the serious questions commence. But if a person is already sweating and breathing heavily, normal responses to being grilled about a murder, then the baseline will be flawed and the test thrown off. Despite the lack of scientific support for its use as a lie detector, the polygraph is used by governments when hiring for sensitive positions or conducting internal investigations. The best-known person ever hooked up to one, spy Aldrich Ames, passed the exam.

5. YOUNG EARTH. Here is evidence for an old universe: 1. We can see light from stars millions of light years away. 2. Since Earth’s earliest days, radioactive isotopes have been breaking down and releasing energy that adds heat to the planet’s interior. By measuring those atoms inside rocks and comparing their ratios to those inside meteorites, Clair Patterson figured out Earth was 4.5 billion years old. 3. Cosmic background radiation, the afterglow of the Big Bang, is visible in the microwave spectrum.

The Young Earth crowd sometimes claims it is silenced by media, science, and academia. There is no such repression on this page. Here is Answer in Genesis’ retort to the light year evidence, radioactive isotopes, and cosmic background radiation: “The Big Bang is entirely fiction because the Bible tells us that God created heaven, earth, and everything within them in the span of six days.”

4. CREATIONISM. I have a Friend who occasionally posts creation stuff. We have gone back and forth a few times, but my strategy has always been defending the Big Bang or evolution. Most recently, he posted a video of a man claiming that the odds against life forming by chance were so astronomical that it had to be done by God. This time, I tried a different tact and posted, “Describe the Scientific Method and explain how he used it in reaching his conclusion.” For first time, my Friend gave no response.

This is because creationism rests almost entirely on finding supposed flaws in evolution or the Big Bang. Proponents have never, to my knowledge, presented scientific evidence for their position. If creationism is championed in a Facebook post or over dinner, it’s a shame the level of science knowledge is at this level. But far worse is the idea of bringing it into a science classroom. This attempt has failed, but the other side continues to battle for it.

3. ANTI-EVOLUTION. It is a common misconception among the general public and among 99.99 percent of creationists that creation and evolution are in competition. I’m not implying they co-exist, but if creation happened, it would have no impact on evolution’s legitimacy. That’s because evolution is the change in inherited characteristics of biological populations over succeeding generations and doesn’t speak to how life formed. Science has only rudimentary guesses as to how that happened. We have good evidence for how the universe began and how planets formed, cooled, and became habitable. There is good evidence life started in the ocean, but we are unsure how. Admitting this ignorance and searching for the answer is science. Invoking a supernatural explanation is not.

With regard to evolution, the stupidity on this subject is so profound that 44 percent of U.S. adults think Man and other animals were created in their present form less than 10,000 years ago. This requires ignoring, or coming up with ad hoc explanations for, Lucy, Archaeopteryx, Tiktaalik, the Geologic Column, carbon dating, animals that exist only on Madagascar, Iceland, and Papua New Guinea, and Richard Lenski’s ongoing e.Coli experiment at Michigan State University.

The most extreme misunderstanding of the theory comes from those who think it posits that monkeys gave birth to humans. Only slightly less ridiculous is asking, “If man evolved from gorillas, why are there still gorillas?” Of course, the theory really holds that man and the apes have a common ancestor, as evidence by you and me sharing 22 of 23 sets of chromosomes with chimpanzees. Other evidence includes the entire biology field.

I have no issue with anyone asserting that God created Man or the universe. My objection is when they claim these conclusions are arrived at scientifically.

2. ALTERNATIVE MEDICINE. This can be a waste of time, a waste of money, or a waste of a life. If you apply a Reiki rub for a minor stomachache, no harm is done, though that’s time that would be better spent posting a pro-science retort on a UFO thread.

Chiropractic, acupuncture, reflexology, and applied kinesiology are rackets. But as long as real medical care is also sought, the patient has a chance to see improvement and is only impacting the wallet, not his or her health. But when these techniques are the only solution, the patient either continues to suffer or is swayed by post hoc reasoning and communal reinforcement. In the most extreme cases, death results. This month, a teen girl in Florida died from leukemia after forsaking chemotherapy for vitamins and veganism. Closely related is the practice of treating serious illnesses with nothing. Faith healers in Idaho, protected by the government, have allowed a dozen children to die from preventable causes. Faith healing is 100 percent faith, 0 percent healing.

1. ANTI-VACCINATION. This tops the list because it kills babies, such as the 18-month old Measles victim in Germany. Those who are too young or too unhealthy to be vaccinated are at risk of dying from a preventable disease. If choosing to be unvaccinated only impacted that person, being unimmunized would be like finishing two fifths of Scotch at home. Bad for the drinker, irrelevant for everyone else. But refusing to vaccinate is like getting behind the wheel after that whiskey bender.

Smallpox went from killing 500 million people to killing zero, probably the most successful of vaccination’s many victories. Vaccines work by stimulating our immune system to produce antibodies without infecting us with the disease. So if the vaccinated person comes into contact with the disease, the immune system will recognize it and produce the necessary antibodies.

On a UNICEF Facebook post about 15,000 African children dying annually from Measles, and the difference vaccines can make there, one respondent wrote, “There’s no way that’s true. If it’s as dangerous as they’re saying, everyone my age would have died from it.” It’s called vaccine denial for a reason.

So there’s my list. I realize that science can be very complex and I can relate to struggling to grasp the concepts. But there’s a clear difference between genuine searching and questioning, and rejecting facts because they run contrary to a pet position.