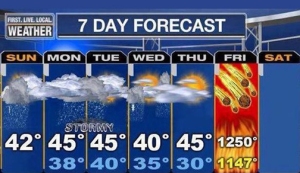 If doomsayers had a .001 winning percentage, I wouldn’t be writing about them.

There have been predictions about the imminent destruction of the planet for as long as Man has been aware of his mortality. As the year 1000 approached, some Christians crucified themselves as a sign of repentance and a way to connect with Jesus, since they were sure the end was near. A millennium later, some were convinced that nuclear bombs would set themselves off and we would be collectively fried.

Most panicky prognostications are religious in nature, though some involve aliens and a few attempt a more scientific spin. There are two main types of doomsday predictions: The vague assertion that the end is coming, and the one that pegs a day or at least a year. I have seen online commentators insist Earth is doomed due to gay marriage, a cross being removed from a public park, or a busy hurricane season. These pronouncements are reactionary at best and gain no traction. To get a doomsday cult of your own, specifics are needed. For maximum attention, assign a date for Armageddon.

Some of the better known of the last 20 years include Aum Shinri Kyo (1995), Heaven’s Gate (1997), the Movement for the Restoration of the Ten Commandants of God (1999, altered to 2000 when that apocalypse came and went), The Lord Our Righteousness Church (2007), Harold Camping (2011), and the Mayan calendar brouhaha (2012). When ATF agents surrounded the Branch Davidian compound, David Koresh told his flock this meant the end was nigh. Jim Jones adopted similar tactics when his empire began crumbling.

Let’s examine one of the reasons people come to this way of thinking. The Lord of our Righteousness Church is led by Michael Travesser, a former Seventh-Day Adventist. He now refers to that denomination as a “daughter of the great harlot” referenced in Revelation. The great majority of Christians who read Revelation come to a different conclusion, or none at all, about who these harlots might be. This highlights a crucial point about Christian portents of doom. Books like Daniel, Ezekiel, and Revelation, with their vivid imagery, and lack of proper names and known places, are open to wide interpretation. This is why people analyzing the same script come to such different conclusions.

Ronald Weinland of the redundant Church of God Preparing for the Kingdom of God has picked dates in 2008, 2012, and 2013 as the time it all comes to an end. One of his failures was explained away by clarifying afterward that he meant the beginning of the end would start on that day.

But clairvoyant Christians aren’t the only players in the End Times Lottery. A partial list of doomsayers over the centuries includes:

• Astrologers (Richard Noone and Jeanne Dixon)

When the end date approaches, some believers commit mass suicide to attain a higher plane, while others feel they will be spared death and snatched to paradise.

While the tactics are similar through the ages, Doomsayers adapt for the times. The 1950s saw the advent of UFO-related cults, such as the one led by Marian Keech. She gathered followers in her home on Dec. 21, 1954, to await salvation from flying saucers, which would spare them from Earth’s fiery end. When the alien rescuers failed to arrive, Keech told her followers their faith had saved the world. She got away with it, as the cognitive dissonance was especially strong. The deeper the investment of time and emotion, the stronger the rejection of alternate truths. Some followers of William Miller reacted the same way when they woke up on Oct. 23, 1844, to find the planet still here.

Marshall Applewhite, however, took no such chance. He instructed dozens of Heaven’s Gate followers to swallow a mix of cyanide and chocolate pudding so their souls would ascend to an alien craft being shielded by the Hale Bopp comet. As far as we know, it worked. No one is here to tell us otherwise. But the subsequent destruction of Earth hasn’t happened.

Another adaptation to the modern day is offering a more plausible-sounding scenario, such as asserting that a dwarf planet or asteroid is on a collision course with Earth. This is distinct from scanning the cosmos for such a phenomenon in order to be ready with defensive measures. Doomsayers, by contrast, dissect the Old Testament, Nostradamus prophecies, or other cryptic texts, then shout that rouge heavenly bodies and mass extinction are hurtling our way.

Then we had the alarmist concern about the Large Hadron Collider creating black holes that would gobble Earth and its inhabitants.

For most of Mankind’s history, we had no idea where we came from, why we were here, or where we were going. This left us primed to create and embrace myths, as way to find meaning in it all. While all the questions aren’t answered, astronomy and biology give us a good idea of how we got here. Astronomy and physics, meanwhile, let us know how it might end. This should mean the end of doomsayers, but cataclysmic events require some persons to square them with the Bible or Nostradamus, and interpret it to mean that it’s almost over. But every generation has seen catastrophic events without the world ending.

Another factor is that some people feel more important to think they are living in the last days. Also, it can be exciting to think the end is coming, especially when it’s also the beginning of something better. Accompanying many doomsday beliefs is the notion that a savior is coming to reward the faithful. These saviors have been many, but the best-known is Jesus. People still think he’s coming back, in some cases to help the South rise again.

Jesus hasn’t returned, but several others have filled the messiah void. Rabbi Sabbatai Zevi had a sizable following in 17th Century England. It was a huge blow to many of his believers when he converted to Islam. But other followers rationalized that the conversion was part of Sabbatai’s plan to bring Muslims to Judaism, or Jews to Islam, as part of a unifying plan that would precede the Rapture. There are people in Turkey, called Dönmeh, who still anticipate Sabbatai’s return.

If you know of anyone who would like to read this, let them know now. Markbeast.com warns that they have only until summer 2016 to do so.