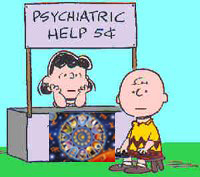 Astrotherapy challenges the assertion that two wrongs don’t make a right. It combines the fallacy of horoscopes with shaky psychology and uses the resulting mongrel to sell people a path to success.

While it taps into the discredited ideas of Carl Jung, the psychology aspect of the practice is relatively scant. Its main connections to that field is its use of leather couches and fern-laden offices. The sessions are primarily an extended horoscope, with little in the way of therapy.

The man most responsible for the field is Dane Rudhyar, who ruminated on Jung’s notion that the psyche needs wholeness, and figured the Zodiac would help that along. He became the first astrotherapist in the 1930s. There are not a lot of astrotherapists these days, but we’ll take a look at the few that I could find.

We’ll start with Alan Salmi and his description of his profession. He starts by accurately noting that changes happen all the time. He then leaps blindly to this unfounded follow-up: “Astrology gives us a map of the ongoing changes and where they came from.” He then ventures back toward possible accuracy by asserting, “Learning to take advantage of change can enhance and smooth our way in life.” Next, he makes the usual New Age appeal to long-lost enlightenment, writing, “Ancient wisdom and knowledge is applicable today.” Salmi closes by setting the conditions for piggybacking on legitimate science and psychology by telling us, “Modern understanding of the mind complements our traditional understandings.”

Salmi uses a patient’s birth chart to determine their position in life. It’s akin to a horoscope, except that it takes at least three expensive sessions to arrive at. During these meetings, therapist and patient will focus on strengths, weaknesses, changes, challenges, goals, and interactions. So it’s pretty much like a job review, except you’re paying the guy to give it to you and not the other way around.

One common thread of astrotherapists is that they provide a ubiquitous New Age benefit, a holistic approach. I feel better just writing that, holistic, holistic, holistic. The mystics of yore, while benevolent and talented, missed the larger picture, astrotherapists insist. The planets impact people, yes, but only in the sense that everything is interconnected. This assertion ties into Carl Jung’s theory of synchronicity and gets in the requisite psychobabble to justify the “therapy” part of the field.

The synchronicity idea merits a quick explanation. During a session with a patient, a golden scarab flew kamikaze style into Jung’s window. The patient related that she had dreamt about just such a flying insect the night before. Jung excitedly reached the conclusion that this was no mere coincidence. The consciousness and the physical world work in concert, he now realized. He further inferred that the cause of the patient’s neurosis was her unilateral personality, and that if it would die, so would her illness, much like the scarab met its demise.

Stated goals of these sessions vary from the comprehensible (“find dormant abilities”) to the esoteric (“delve into the subconscious”) to the nonsensical (“become cosmically synchronized.”)

Since the field is not legitimate science or medicine, it requires no licensure or education, and most practitioners have no competence in therapy. Still, legitimate doctors can be part of the work, such as psychologist Glen Perry. Though a fan of astrology, Perry insists it has limitations and he works to eliminate them. For instance, traditional astrologers might stipulate that a Capricorn and Gemini would be incapable of a long-term loving relationship.

He says ideas like this result from misinterpretation of the art. While two persons from these amorous-challenged signs may end up lovelorn, another possibility is that an even more profound passion may result. This is because the love would need to be built on patience, searching, understanding, and support (something it would have in common with every meaningful romance ever). Perry’s system allows maximum flexibility for the doctor. If it works, great, the system succeeds! If not, well, yeah, you know that Capricorn-Gemini thing can be a doozy.

Others in the field likewise steer far wide of definitive statements when analyzing someone. A typical line from an astrotherapist reads, “The readings symbolize the type of adult that the individual may become.” None of the sites list any analysis, methods, or research. In fact, this field is beyond empirical testing.

For those that prefer the Jung angle, we have the aforementioned therapists. For those that want the stars to guide their way, we have Max Heindel, who has convinced people to pay for advice like this: “At the time of conception the moon was in the degree which ascends at birth. The vital body was then placed in the mother’s womb as a matrix into which the chemical elements forming our dense bodies are built. The vital body emits a sound similar to the buzz of a bumblebee.” He then goes on to explain how people can lose this matriarchal moon-flying insect goodness, and how he can fix it.

Another of the more astrology-themed practitioners, Jennifer Forchelli. lets us know that, “The position of the planets on the day you were born have miraculous information regarding your behavior, thoughts and lessons in this lifetime.” On her website, she attributes so much power to these traits, it’s perplexing why she wastes money on advertising, or spends time creating websites. If the stars preordained every action as much as she suggests, the customers would show up anyway.

She also assures us that each session with her is “a deep dive into crystal clear self-awareness.” Which begs the question, if the patient experiences self-awareness, why does Forchelli even bother showing up? My favorite of her abilities: “Cleaning toxic energy within your family dynamics.”

While comical, this field can have serious ramifications. Kimberly Carson boasts, “My clients tell me that during our astrotherapy sessions, we uncover in a matter of minutes what they’ve been trying for years to figure out in traditional therapy. Once you realize that you chose the conditions in your life you are immediately transformed from victim to victor and can live the life you were meant to live in peace, harmony and prosperity.” Offering advice this shallow and simplistic to someone suffering from mental issues is disturbing. Successful resolution takes years of therapy from licensed, educated professionals, not 15 minutes with someone impersonating Sydney Omarr and Sigmund Freud.