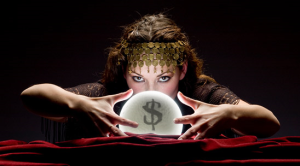 The surest sign that a psychic is fraudulent or self-deceived is if they identify themselves as a psychic.

Here are some other hints. They call a plumber when their pipes burst, not the day before. They go for medical checkups, which would be superfluous for someone who knows their current and future health. If they want information on Benny Goodman, they use the Internet or library instead of summoning his spirit.

But the above instances aren’t there for us to see, so we’ll delve into some psychic techniques and see how they are used to fool people. Some psychics still use Tarot Cards, crystal balls, and palm reading to maintain an air of mysticism. Many others work without these accouterments, especially when doing readings on TV or before an audience. Then we have telephone psychics, which I will believe in when they call me.

Whatever the method, the most frequent technique is cold reading, in which the psychics glean information from the victim, then feed it back to them while talking credit for uncovering it. A trained medium has learned how to read body language and facial expression, as well as gauge speech inflection. They know when they’ve made a connection, and are prepared to pounce and build on this. They ask very open-ended questions, get the victim to talk at length, then portion out bite-sized information back to them as if it were coming from the psychic’s mind. A concise definition of cold reading would be, “a succession of generalizations about someone meant to elicit a response, followed by a series of educated guesses.”

The reason it can seem successful is because psychics use broad statements that apply to most people. Before an audience, the psychic might ask if there is someone present who lost a family member prematurely due to heart disease, which a common method of demise. In a personal reading, it might be, “You’ve had some difficulties with romance,” “You think about your health,” or “You worry about your family.”

Then we have hot reading, where information if gained beforehand through books, the Internet, or acquaintances of the victim. Before being exposed by James Randi, preacher Peter Popoff would have his wife get victims to enter prayer requests on a card, then have her read it back to him through an earpiece. Researching information beforehand has also been used by psychics before TV appearances, with the host stunned by the accuracy of a reading done on them.

One of the easier techniques to spot is shotgunning, where the psychic throws out a long series of guesses, hoping for a hit, and further hoping that misses will be forgotten. It goes like this: “I’m seeing him in transportation, like a pilot, or bus driver.” This is wrong, so the psychic meanders into, “Or maybe a bus driver or ship captain?” Still coming up empty, the psychic barely keeps the ship connection by delving into, “I’m still seeing water, though, maybe SCUBA diving, or snorkeling, fishing perhaps?” Nope. “Not fishing? How about hurting, did he like to hunt?” “Oh, he loved to hunt.” So the medium is all over the psychic landscape, from pilot to hunter, with several misses in between, but counts this as a hit. Meanwhile, the victims allows this, owing to confirmation bias and a desperate desire to connect with a deceased loved one.

Besides changing the subject, another furtive move is casting a wider net. If “Who was born around Christmas?” fails to register, it evolves into “What significant event happened around Christmas?” Or if “Did your mother smoke?” fails, it morphs into, “Did she like campfires? I’m definitely seeing smoke.”

Another common method is using contradictory information that virtually guarantees a hit, such as “You enjoy being with friends, but also appreciate your alone time.” I saw a psychic guess that a 20-something woman was “a mother, maybe mother-to-be,” which is going to apply or appeal to virtually any woman that age. Or the person might be told, “Your father was well off, or at least took good care of the money that he did have, or if not a lot of money, ensured he and the children had enough.” This is going to apply whether the father was poor, middle class, or wealthy.

Another technique is to ask a question, then claim you knew the answer when it was revealed. The psychic might ask, “What were his hobbies?” and when told they were chess and woodworking, will be offered, “That’s what I thought, I was seeing board games and working with his hands.”

If they completely blow it, they might blame bad energy that day. Some have even been known to berate victims for failing to do their share, or to fault skeptics in the audience for negative vibes. When proven utterly wrong, such as when Sylvia Browne said Amanda Berry was dead, psychics will resort to saying that, like all professions, their success rate is less than 100 percent. And, to be sure, 0 is less than 100.